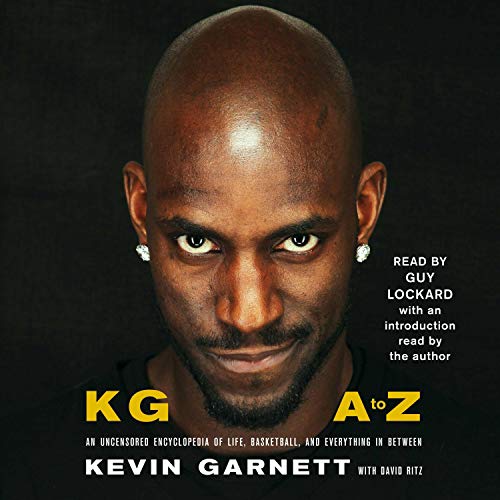 A unique, unfiltered memoir from the NBA champion and 15-time all-star ahead of his induction into the Hall of Fame.

Kevin Garnett was one of the most dominant players the game of basketball has ever seen. He was also one of its most outspoken. Over the course of his illustrious 21-year NBA career, he elevated trash talk to an art form and never shied away from sharing his thoughts on controversial subjects.

In KG: A to Z, published ahead of Garnett’s induction into the Basketball Hall of Fame, he looks back on his life and career with the same raw candor. Garnett describes the adversity he faced growing up in South Carolina before ultimately relocating to Chicago, where he became one of the top prospects in the nation. He details his headline-making decision to skip college and become the first player in two decades to enter the draft directly from high school, starting a trend that would be followed by future superstars like Kobe Bryant and LeBron James. He shares stories of playing with and against Bryant, James, Michael Jordan, and other NBA greats, and he chronicles his professional ups and downs, including winning a championship with the Boston Celtics. He also speaks his mind on a range of topics beyond basketball, such as fame, family, racism, spirituality, and music.

Garnett’s draft decision wasn’t the only way he’d forever change the game. His ability to play on the perimeter as a big man foreshadowed the winning strategy now universally adopted by the league. He applies this same innovative spirit here, organizing the contents alphabetically as an encyclopedia. If you thought Kevin Garnett was exciting, inspiring, and unfiltered on the court, just wait until you hear what he has to say in this audiobook.

K G is one of the great.

This is one of those books you will enjoy. For me not only did I enjoyed it, I fell in love with it. I think K G, did a great job putting it together. Find out a lot about Kevin Garnett. Reading his story, and if you know anything about K G, his book make you understand how and why he became one of the greatest ever played Basketball.

Great book but I REALLY wanted to hear KG narrate this book. he's such a great story teller that this could have been one of the best audio books ever. the narrator wasn't bad but I bought this book to hear KG tell his story.

Good but could have used more personal depth

I thought this book was great in talking about Mr. Garnett's passion. This was also a great book for basketball stories and details. There were not a lot of details on his personal life. There was virtually no mention of his wife and kids or any other aspects of his personal life once he became an adult beyond some personal tragedy. If you are a big basketball fan, you will love this book. If you are wanting to dive into Mr. Garnett's personal live since the book is titled "Everything A-Z" then you should skip it.

TBH wouldn’t have given this book a second glance if not for the idea by a very good friend. The world he came from was hard and he still made the choice to be a better man and role model for those coming up behind him.
Definitely WORTH reading!

I thought the book was okay. Kevin Garnett should have narrated the whole book.

Was never a big fan of KG, but after hearing this book I have found a new respect for him. You get to see him in a different light. Great book. A real one.

The really shit I've ever heard Thank you very much the book is awesome THE TRUTH The truth!!!💯💯💯💯

it's a good book. learned in depth about KG. I didn't like the narrator voice. I didn't know KG almost went to Inglewood high. howcome he didn't mention Marbury at all?

I purchased this because of my love for basketball. However, your historical journey called life was a pleasure to listen to. From one dark brother and product of the 80s, I say great job.

A to Z is as real as it’s gets no matter how you put it KG Did what was best for him. So as humble as he was. KG goal was to make it and do it his way. Whatever the cost he was willing to do whatever it’s to make it. Even with a few bumps in road. KG was to Overcome the Opticals and still became King and Champion beyond belief.

just amazing ... all the background information and so much knowledge. KG is king! definitely a big recommendation