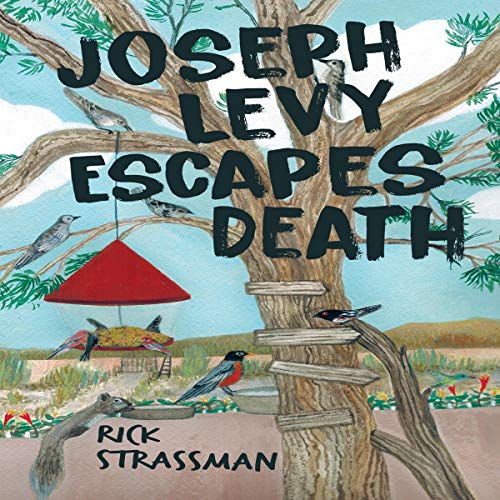 Joseph Levy leads a quiet life in rural Wheaton, Arizona. Retired from a long career in psychiatric research and practice, he reads, writes, and wanders through the mountains and hills near the Native reservation.

His quiet life ends, however, when a dental crown replacement goes poorly just before meeting an internet date in California. Thus begins a year of back-to-back nightmare infections, a drug overdose, and two failed relationships.

At every step, Levy is confronted by matters of life and death, love and hate, faith and doubt, trust and betrayal. Most of all, he faces what it means to be sick and to be healthy. He prays to his God, relies on his friends, examines his dreams, and entrusts his psyche to a new therapist.

Joseph Levy Escapes Death is a tale of medical comedic horror and perseverance in the face of relentless adversity. This is the first novel by psychiatrist Rick Strassman - author of the best-selling DMT: The Spirit Molecule and co-producer of the hugely popular independent documentary by the same name.

Here, he paints his protagonist’s journey with a wide palette: medical, psychoanalytic, and religious - Jewish and Buddhist. Enlightening detours include discussions of love in the time of internet dating, cardiovascular physiology and microbiology, the Holocaust and Jewish-Christian relations, and the psychotherapeutic process.

Reactions to Joseph Levy are rarely neutral, and vary according to a person’s own psyche. Reviewers compare Strassman’s first novel to works by Kafka, Philip Roth, JD Sallinger, John Irving (Cider House Rule, The World According to Garp), and Joseph Heller (Catch-22).

Dr. Strassman delivers with his first ever fictional piece! Relatable, jocular and one-of-a-kind. I recommend.

A nice pandemic read about the mundane pains that order and navigate. Strassman is a great fiction writer

Most of us expect our day of departure from this world to be an epic parting or a romanticized drama where we say goodbye to loved ones, just like in the movies. Joseph Levy escapes death paints a more realistic picture of that journey, in that it will be a day, just like any other day and you will be you, just like you are you right now. Without going into spoilers, the book is a dark comedy/drama cataloging the internal dialogue and happenings of Joseph Levy as he faces this very prospect. It is both subtle yet deeply profound depending on the listener. Considering it was written by a man that literally wrote the book on "The Spirit Molecule", and we, therefore, would expect to be deeply spiritual and well versed in esoteric afterlife theories. It is refreshingly humble and honest. It gave me permission not to be enlightened, even with my vast history of spiritual seeking and experiences. The book is about as close as one may get to the head-space of death before experiencing it themselves. Funny, authentic, and at times a little too real!

This story has it all….Man vs woman, Jew vs Christian, black vs white, it reminds me of one of those Dean Martin Celebrity roasts! Hopefully you’ll be offended & then laugh out loud!