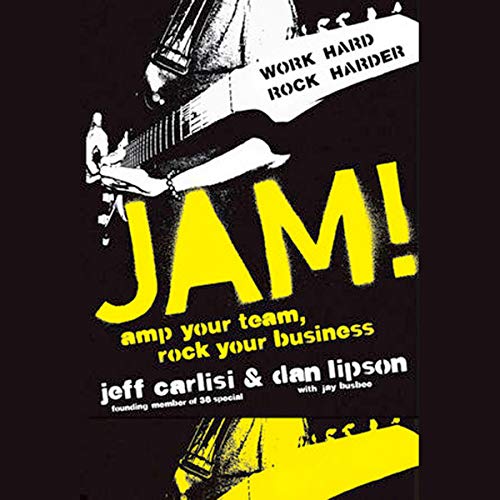 What do the world's best bands and businesses have in common?

More than you'd think. In fact, the winning teams that built Microsoft, Disney, and Starbucks have much in common with the Rolling Stones and U2.

Like a business, a successful rock band is made up of both visionaries and devoted followers, leaders and team players. But the band only achieves success when the entire group is pulling in the same direction. When all members understand the parts they must play within the group - contributing creatively and playing to their strengths - that's when the hits start coming.

In Jam!, Jeff Carlisi, former lead guitarist and songwriter of 38 Special, tells his own unique story of rising to the top of the charts and the business world, offering one of the most fun, original approaches to team-building and acquired business savvy. Filled with stories of the rock 'n' roll life, like that of the architect who became a guitar superstar and the multimillion-selling track that almost never was, this is an insider's view to making it big and the pitfalls to avoid along the way. Each chapter examines a key moment in the development of a band - formation, early success, internal crises, falling out of the spotlight - and demonstrates how executives can use those lessons to crank their own businesses to 11.

Jam! also includes insights from seasoned musicians who have played in some of the world's best-known bands, including the Rolling Stones, the Eagles, the Allman Brothers, Night Ranger, and the bands of Eric Clapton, Billy Joel, Rod Stewart, Joan Jett, and Sheryl Crow.