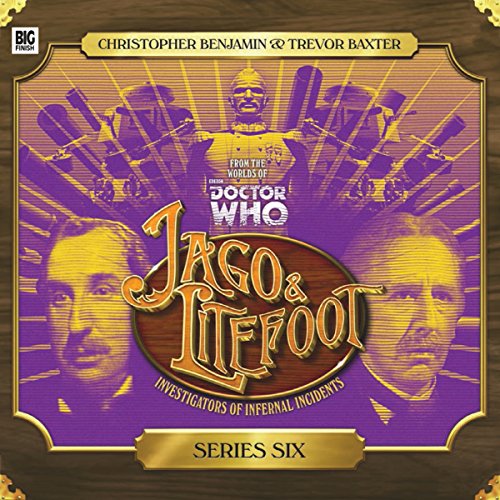 6.1: 'The Skeleton Quay' by Jonathan Morris: Henry Gordon Jago and Professor Litefoot are back in the familiar fog-shrouded streets of Victorian London, but a new calling awaits them.... The Colonel, an emissary of Queen Victoria herself, reveals that their services are required by Her Majesty - and their first assignment is to investigate a series of ghostly apparitions at Shingle Cove.

6.2: 'Return of the Repressed' by Matthew Sweet: Henry Gordon Jago is troubled. He's having disturbing dreams, and the waking hours aren't much better.... Only one man can help - renowned Austrian mental pathologist Sigmund Freud. But even Freud isn't prepared for what he will discover in the mind of an infernal investigator.

6.3: 'Military Intelligence' by George Mann: There are Sentinels on the streets of London, killing without mercy. And as a web of intrigue unfolds, Jago and Litefoot move closer to confronting the enemy of the Crown. A battle to the death will demand the ultimate sacrifice.... Can this be the end of Jago and Litefoot?

6.4: 'The Trial of George Litefoot' by Justin Richards: Professor Litefoots stands accused of murder, and the court is determined to find him guilty. With fire about to rain down on London, Litefoot's only salvation lies in the most unexpected hands....

Another great outing for Jago and Litefoot. the first one was just average but the rest made up for any slack in the first story.