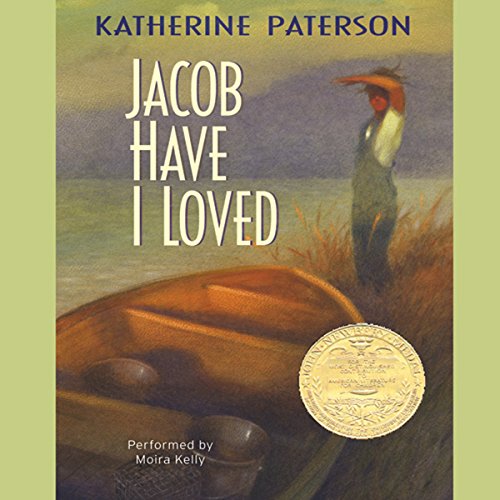 Jacob Have I Loved

"Jacob have I loved, but Esau have I hated." With her grandmother's taunt, Louise knew that she, like the biblical Esau, was the despised elder twin. Caroline, her selfish younger sister, was the one everyone loved.

Growing up on a tiny Chesapeake Bay island in the early 1940s, angry Louise reveals how Caroline robbed her of everything: her hopes for schooling, her friends, her mother, even her name. While everyone pampered Caroline, Wheeze (her sister's name for her) began to learn the ways of the watermen and the secrets of the island, especially of old Captain Wallace, who had mysteriously returned after 50 years.

The war unexpectedly gave this independent girl a chance to fulfill her childish dream to work as a watermen alongside her father. But the dream did not satisfy the woman she was becoming. Alone and unsure, Louise began to fight her way to a place where Caroline could not reach.

Renowned author Katherine Paterson here chooses a little-known area off the Maryland shore as her setting for a fresh telling of the ancient story of an elder twin's lost birthright.

I wondered why the time stamp was only about 3 hours long. Then I started reading along to it, and after it skipped ahead 2 pages I realized what was up. I am super disappointed because the narrator is really good. 😢

Beware . This book is shortened. AKA abridged.

What disappointed you about Jacob Have I Loved?

The story was intriguing. However Moira Kelly for the narrator was a horrible choice. The way she reads became really aggravating

An abridged version but still good

I was disappointed to realize, after listening, that this is an abridged version of the novel. Still, l enjoyed it. Coming of age stories are among my favorites. This one is a wonderfully emotional tale of an island girl finding her way in the world. Recommended.

Katherine Patterson is one of the greatest writers I have ever had the pleasure of reading she tackles big issues with an unflinching, yet compassionate heart, and writes with such poetry and mastery that she sucks the reader in. And Moira Kelly nailed the reading performance. would recommend to anyone and everyone.

It was a nice read. Nothing amazing but enjoyable and makes you ponder a bit.

I remember this book from my school days.

I remember this book from my school days. I enjoyed reading it a gain. Moira Kelly did a beautiful job reading it. I highly recommend this audiobook.

One of my favorite young adult books ever!

I love this story of feeling overlooked and forgotten by God, then realizing he has a plan for you all along.

A little slow, but good.

Good narration. Thoughtful storyline but was a little slow paced. This being the abridged version you could tell it was missing certain parts of the story or even felt a bit rushed at times, but I think overall it was well done. I liked most getting into the head of a teenager again and seeing how they think. Can be so interesting.