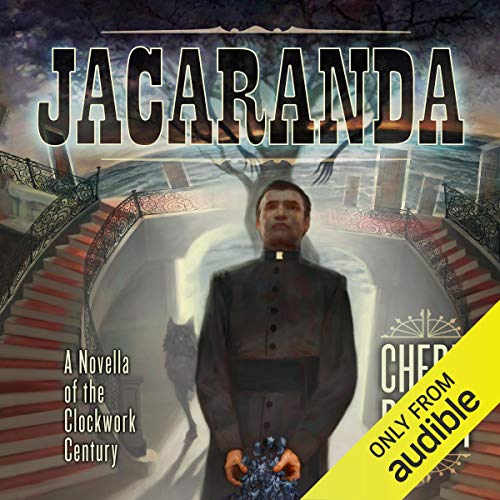 On the island of Galveston, off the coast of Southeast Texas, lies a hotel called the Jacaranda. In its single year of operation, two dozen people have died there. The locals say it's cursed. The Rangers say that's nonsense, but they know a man who might be willing to investigate. Horatio Korman crosses the water from the mainland and hopes for the best.

But the bodies pile up, and a hurricane is brewing up fast. One of the Jacaranda's guests sees time running out, so she seeks an authority of a different sort: a priest from El Huizache who is good at solving problems and keeping secrets. Eileen Callahan has a problem to solve and a secret to keep. She crosses her fingers and sends a message that could save them all.

Juan Miguel Quintero Rios broke a promise to the Virgin, and so he was punished...but his intentions were pure, so he was also blessed. Now he walks the Southwest with second sight and a tattoo across his back: "Deo, non fortuna" - by God, not chance. The former gunslinger crosses himself and makes for the Jacaranda Hotel.

This is the 1st in the series I've read... I was impressed and entertained... This short novel/long novella really is unique... I don't recall reading, or hearing of, a ghost story w/ a western type setting and characters... Think dark western meets The Shining and you'll almost have it... Gothic Western maybe??? Nevertheless, an original and imaginative plot w/ some very likably tragic figures...Difficult not to get invested in the Padre... The mood was intense yet ephemeral... You feel like you're catching something outta the corner of your mind, and then it's gone... Good ghost story amplified by the darkness of the storm weaving it's way through the tale... The narration was superior, suitable gravitas and sobriety... Definitely worth a credit even for a shorter work...

This is a pretty good novela with one character from the clockwork universe. Lots of action and angst. I guess I would have preferred more closure for the ranger.

Young lady can write! Love this story. Can't wait to listen to more of her work.

Ending to a series

This was not like the others and at first had a hard time with it. It didn't fit into the rest of the series. But we made it.

a well told story although one wishes the characters had developed more worthwhile relationships. the reader is at his best when he slips into his native Texan accent and one wishes he had not tried to overcome it.