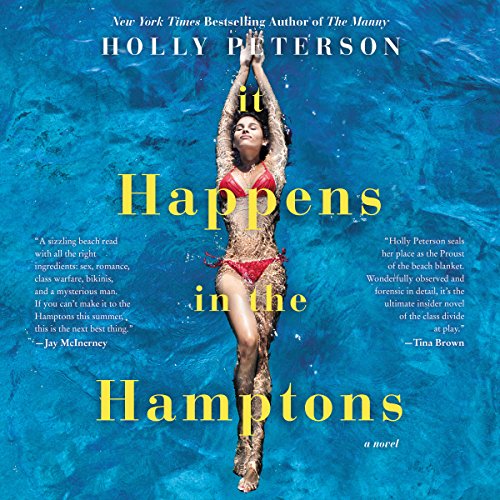 It Happens in the Hamptons

In the Hamptons, the everyday people are as complicated and fascinating as the millionaires...

When Katie Doyle moves across the country to the Hamptons, she is hoping for summer employment, new friends for her young son, and a chance to explore a new love affair with a dazzling investor. What she finds is a strange cocktail of classes, where society's 1 percenters vacation alongside local hardworking people who've lived in the Hamptons for generations. Though she's looking forward to their move, Katie is wary about mingling with her boyfriend's East Coast elite circles. She soon discovers Southampton isn't all that it seems to be on the surface - and neither are the people who live there.

As George takes Katie on a whirlwind tour of country clubs, haute couture, and lavish events, she is amazed to witness sudden whims become dire needs, extramarital affairs blossoming right and left, and people purchasing friends and loyalties like pairs of shoes. Even the middle-class townspeople maintain a determined façade while maneuvering like sharks among the wealthy summer invaders.

The more Katie becomes immersed, the more she learns the secrets of both the upstairs and downstairs, the upper crust and middle of the road. The combustion between the classes becomes explosive as the summer tears on. Betrayals, a sexual predator, and a missing person lost in murky waves drive the listener on a racing Learjet ride through impossible twists and turns until landing at the shocking conclusion. When she meets Luke, a local surfer and middle school teacher, he makes her question what it is she really wants as she understands the life she's begun for herself is built on shifting Hamptons' dunes.

Couldn't even finish it.

What would have made It Happens in the Hamptons better?

I really wanted to like this book as I have liked other books by this author so I was really disappointed when I didn't. It read more like a young adult book. Half way in I just couldn't stand it anymore. If you are on the fence I would say don't bother.

Where does It Happens in the Hamptons rank among all the audiobooks you’ve listened to so far?

I found It Happens in the Hamptons to be a genuine good story, but slightly predictable. It may just be me, but about six chapter in I already made the connections between George and Bucky. Although the romance with Luke and the relationship connections did surprise me towards the end. I found this book to be a great listen as I drove to and from work and i found myself wishing the drive was longer to get just one more chapter.

Em Eldridge has a great voice for reading and a very good distinction between dictation of the different characters.