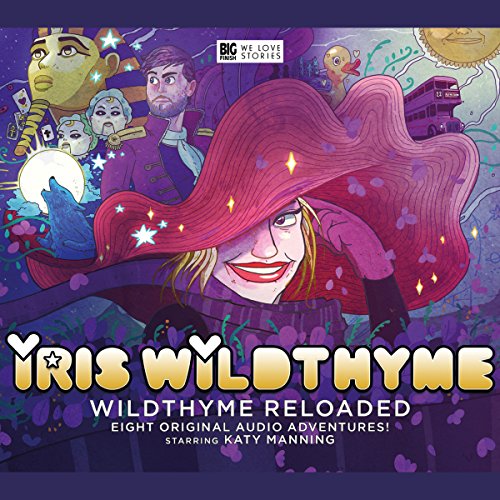 Join transtemporal adventuress Iris Wildthyme (Katy Manning) for a series of eight brand-new half-hour episodes as she travels through time and space aboard her trusty double-decker bus, accompanied by her new friend, Captain Turner!

1. 'Comeback of the Scorchies' by James Goss. One-hit '80s wonder Brian Bonamy is back - and he's wowing the crowds of Margate! But when Iris and Captain Turner take in the show, they quickly realise something else is behind his success...and that Iris is still under contract!

2. 'Dark Side' by Nick Campbell. Needing a break from adventuring, Iris decides to return to her former home, Pink Gables, where she is more than a little surprised to discover that unearthly forces have subsequently taken up residence.

3. 'Oracle of the Supermarket' by Roy Gill. Cassie Burdock works on the till in the local branch of Fergusons. She thinks she's nothing special, that she's just like everyone else...until one day she finds that she can predict the future with unnerving accuracy.

4. 'Murder at the Abbey' by Mark B. Oliver. After witnessing the death of one of their friends, Iris and Captain Turner turn sleuth to get to the bottom of things. But just who would want to commit such a beastly crime...and why? Wildthyme is on the case!

5. 'The Slots of Giza' by Hamish Steele. The Giza is the Hawkhead Nebula's premier casino experience: Vegas on an intergalactic scale! But when one of Iris' fellow slotters dies at her machine, she and Captain Turner quickly learn that the Giza's guests are gambling with their lives.

6. 'High Spirits' by Cavan Scott. When Iris lands the bus on the infamous Garden in the Clouds, she and Captain Turner are expecting a world of peace and tranquility. Instead they arrive on a world plagued by hauntings, where the ghosts want to lay them to rest.

7. 'An Extraterrestrial Werewolf in Belgium' by Scott Handcock. After an unexpected incident with a transdimensional entity in the 1970s, Iris makes an emergency landing in Flanders, where legends of an ancient wolflike bogeyman soon prove to be frighteningly real.

8. 'Looking for a Friend' by Paul Magrs. In a bar in central London, a strangely dressed woman reappears night after night, drowning her sorrows and searching for a friend she left behind.