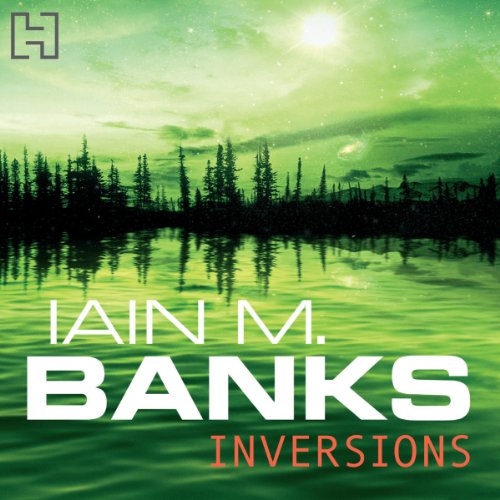 In the winter palace, the King's new physician has more enemies than she at first realises. But then she also has more remedies to hand than those who wish her ill can know about. In another palace across the mountains, in the service of the regicidal Protector General, the chief bodyguard, too, has his enemies. But his enemies strike more swiftly, and his means of combating them are more traditional.

Spiralling round a central core of secrecy, deceit, love, and betrayal, Inversions is a spectacular work of science fiction, brilliantly told and wildly imaginative, from an author who has set genre fiction alight.

"A fantastic, awe-inspiring book ... I can't imagine anyone not being won over by this deeply entertaining, thought-provoking and humane story" ( Express)
"Taut, hilarious and wicked" ( Mail on Sunday)
"Compulsive Banksian reading ... thoughtful, intelligently bloody stuff" ( SFX)
"Captivating ... incisive ... as sublime as ever" ( Time Out)

"A Culture Novel that Wasn't" (But Really Was)

Inversions (1998) is the least obviously science fictional of Iain M. Banks' Culture novels, which are usually replete with imaginative and sublime far future science and technology. The Culture is an interstellar anarchic utopian confederation of artificial and natural worlds populated by humanity, aliens, and sentient machines, and run by AI space ship "Minds." As resources have become practically limitless, everyone is theoretically free to do whatever he or she or it wants. The Culture tries to be an enlightened civilization, being intolerant only of aggressive civilizations. A frequent Culture dilemma is what to do when faced with bellicose civilizations that just won't listen to reason or play fair: improve them, crush them, or ignore them. It is in this context, then, that Banks, in his words, tried "to write a Culture novel that wasn't."

Banks upsets his normal Culture pattern by setting his novel on a single world (with two suns and multiple moons) in a medieval-monarchic-patriarchal civilization that knows nothing of interstellar travel, let alone the Culture. The novel is comprised of two alternating and inverting stories, one about the Doctor, a mysterious woman named Vossil who has become the personal physician to King Quience of Haspidus, the other about the Bodyguard, a mysterious man named DeWar who has become the personal bodyguard of Protector UrLeyn of Tassasen. Even readers unfamiliar with Banks' other Culture novels should gather early on that Vossil and DeWar hail from some much more advanced civilizations. And if you've read some Culture novels you might wonder about a suspicious rain of fiery rocks that caused an empire on this world to fall. . .

The two story strands and their two protagonists mirror each other while remaining tantalizingly separate. Both Vossil and DeWar are trying to keep their respective rulers alive, she through medicine, he through violence. Both retain their integrity, morality, and humanity while surrounded by torturers, assassins, aristocrats, and spies. Yet one gets the impression that Vossil is subtly nudging her King towards progress while DeWar is passively watching his Protector try to establish a new form of government. The two stories are told by different narrators. Vossil's naive young assistant Oleph is spying on her for an unknown master and telling the story of his youthful infatuation with the Doctor when he's an old man, while a sophisticated person who wants to keep his or her identity secret is telling the story of DeWar's attempts to protect the Protector and to explain himself.

Banks being a fine writer, he writes some neat lines, as when Oleph tries to avoid seeing some horrible implements of torture, but "they attracted my wide-open eyes like suns attract flowers." And he writes characters it's easy to care about. DeWar and Vossil are compelling, as are some of the characters around them, Lady Perrund (the maimed and beautiful former first concubine of the Protector), the Protector's little son Lattens, Oleph, and the subtle King Quience.

The philosophical base of the novel rests on shifting sands. Oleph recalls the Doctor telling him that although "We can never be sure of anything. . . yet we must live. We must apply ourselves to the world." But how to apply ourselves? Oleph points out that "We never like to think that we are sinning, merely that we are making hard decisions, and acting upon them." DeWar tells Lattens a story in which some people live in a utopian world where they can fly on invisible wings and everyone has everything they need and is reasonably happy, and wherein two cousins, a man and a woman, friends since childhood, have an argument regarding the savage tribes around them:

"Was it better to leave them alone or was it better to try and make life better for them? Even if you decided it was the right thing to do to make life better for them, which way did you do this? Did you say, Come and join us and be like us? Did you say, Give up all your own ways of doing things, the gods that you worship, the beliefs you hold most dear, the traditions that make you who you are? Or do you say, We have decided you should stay roughly as you are and we will treat you like children and give you toys that might make your life better?"

Thus after all Inversions really is a Culture novel, for Banks can't help writing sf that reveals the culture of our developed countries here and now.

Inversions is also an anti-war story in which, unusually for anti-war stories (and for Culture novels, which usually feature a fair amount of large and small-scale violence), the war here (quite horrible in its effects on individuals and nations) happens far off-stage or in the past. The only war shown in real time is a cool and creepy game (recalling Uncle Toby's hobby in Tristram Shandy) played by DeWar and Lattens in which they fire mini-catapults from a balcony into the landscaped garden below, trying to destroy each other's miniature towns and ports. Are we watching a future warlord being made by playing this "innocent" version of the real war taking place elsewhere in the world.

Peter Kenney reads the audiobook engagingly, giving Vossil an indefinable accent to highlight her foreignness, reading female voices without straining to be feminine, and enhancing the story and characters.

Like each of Banks' Culture novels, Inversions is a self-contained and relatively compact story. It reminds me of the Strugatskis' Hard to Be a God, or of Le Guin's Ekumen stories. It might disappoint fans of heroic or epic fantasy, as well as fans of big spectacle space opera, but people who like Banks' Culture novels and thoughtful and moving sf or fantasy novels about the difficulties in helping people or doing the right thing (or deciding what the right thing is to do) would probably like it.

Not your usual culture novel

A wonderful work of fiction, but minus the usual trappings of Culture books except for a few brief passages at the end. Still, masterfully written and enjoyable.

Interesting but not a typical Culture novel

An interesting story, but with almost no mention or reference to the Culture, which was disappointing. Certainly not the tech-infused romps Iain M Banks usually thrills and inspires us tech lovers with. Frankly, not worth reading unless you like medieval pageantry and political prose of pre-tech civilisations - invest your time in another more future focussed episode.