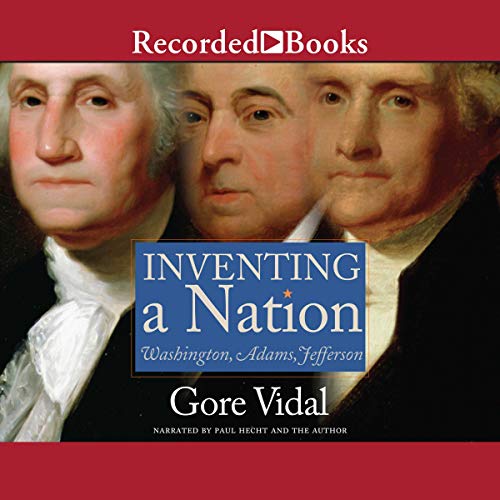 Gore Vidal, winner of the National Book Award and the National Book Critics Circle Award, is one of the great figures in American writing. Now through Vidal's extraordinary literary talents, the three men most responsible for the shaping of America come to life as never before.

Volumes have been written about George Washington, John Adams, and Thomas Jefferson, but no previous work captures the intimate and vital details the way Inventing a Nation does. Vidal's consummate skill takes you into the minds and private rooms of these great men, illuminating their opinions of one another and their concerns about crafting a workable democracy.

Inventing a Nation is a remarkably vivid portrait of three American icons, men whose revolutionary ideas had a profound and lasting impact on the nation they helped create.

"This entertaining and enlightening reappraisal of the founders is a must for buffs of American civilization and its discontents." (Booklist)
"An unblinking view of our national heroes by one who cherishes them, warts and all." (New York Review of Books)

I thought I was downloading an American history book. Had the author left out his current political opinions by using this book as a soap box to move his political agenda, the book would have been excellent.

This is a great book to listen to if your don't like chronology, order, or unbiased writing. I'd rather have a HISTORY book rather than a politically charged sleeping aid. This is not a book for the historically ignorant, either. You've got to remember alot of graduate level history in order to follow this pontification.

Being with Gore Vidal

I love Gore Vidal and American history. Listening to him discuss various aspects of our history, official and unofficial, with little asides and gossip, is an absolute pleasure. One reviewer called it a "pontification", and I agree -- but am so pleased to just curl up and listen to such a brilliant mind pontificate! Its a joy. But the work IS complex so be prepared to give it your full attention.

I liked Vidal's book The Golden Age enough to try some of his history. This book is recent and seems built up from the extensive work he has done on the early Republic and its leaders. Again, Vidal makes nearly every other sentence cynical or ironic, or smartalecky. At first this put me off, but after a few chapter I got used to it. There is not really much here I didn't already know, as this book is kind of an introduction to the founding fathers (centering on Washington, Madison, and Jefferson). It is clear that Vidal stands in awe of these figures, even as he exposes their very human failings and contradictions. Hamilton gets a lot of coverage (mostly in his role as a British spy), and this has gotten my interest enough to consider looking into a book just on this topic. Vidal on the one hand makes clear Hamilton's founding of the American economy, but of course to Vidal this is not such a good thing.

The recent attraction for knowledge of our country?s founding fathers has given rise to numerous volumes dedicated to their lives, both public and private. Yet Gore Vidal?s Inventing a Nation clearly delivers a wide assortment of information regarding both spectrums of life while simultaneously reinforcing or denouncing legends of these men. This text is unmatched by any towards that era and can be enjoyed by more than simply historians. It receives my highest rating.

America According to Gore.

Despite the usual polemical tangents into areas of questionable relevance,(they don't last very long)- this is a highly interesting and entertaining exegesis. There's much to be learned from Gore Vidal and that's why I read him. Who knew what hypergamous meant? When he's content to just tell the story, the death of Washington for instance, there are few better. The Vidal style continues to influence the new generation of historical biographers and that's all to the good. His charming, personal anecdote about President Kennedy at the end of the book is a jem in itself.

Caustic, witty, scholarly and highly entertaining, Mr. Vidal's book paints a vivid portrait of the post-revolutionary political landscape and the characters who inhabited it. The author delights in drawing parallels with current political and constitutional issues, from the Homeland Security Act to Tony Blair's rise to power. While this may annoy some listeners, it never gets in the way of a pacey narrative that is very well narrated.

A Real Inquiry into American History

The book does not aim to be merely an objective recitation of the facts. Rather, it is the author's analysis of that remarkable period. It is very fact heavy, and relies extensively on significant quotes from letters, early drafts of documents, and other revealing contemporary papers. Ultimately it shows that although our founders participated in extraordinary intellectual debates, their world was a rife with mundane tasks and self-serving political ambition as ours is today. There were some who shown as true stewards of the public good, and others who were in it for themselves.

I suppose the great lesson is that, despite the early politics, we ended up with a system of government to be proud of. The public good won, but it was not without a lot of work. This is Gore Vidal's analysis of that work and that time.

Vidal is an extraordinarily well educated scholar and historian. He also has his own opinions which he does not hide. His tone is classic and scholarly - this is not light reading. However, if you're willing to devote some focus, this is a well documented perspective on a remarkable time in world history.

Mr. Vidal's research into these three founding fathers is excellent. You will learn more than many standard history texts provide about what these three men did, especially Hamilton's being a double-agent for the Brits (GASP!), a treasonous act which had it not been for his stature would have had him convicted and executed, just as Nathan Hale was during the American Revolution.

Had Mr. Vidal stuck with the facts and better maintained his focus on them, I would have given this a five-star rating. However, continuity is greatly lacking, as he ventures into the recent past, revealing his own biases about those events (as his ending coda makes all too clear), and then all of a sudden it's "forward into the past" as the book regains its focus.

I found the information interesting, but I had issues with Vidal's frequent 'editorial' injections, and by the end of the book I was really annoyed with the readers' constant swallowing.