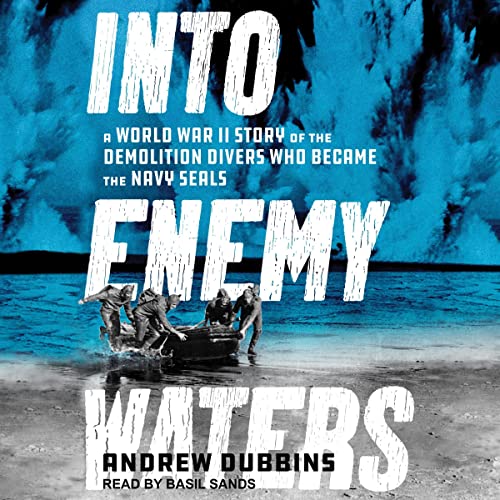 Into Enemy Waters is the story of World War II's most elite and daring unit of warriors, the direct precursors to the Navy SEALs, told through the eyes of its last living member, ninety-five-year-old George Morgan. Morgan was just a wiry, seventeen-year-old lifeguard from New Jersey when he joined the Navy's new combat demolition unit, tasked to blow up enemy coastal defenses ahead of landings by allied forces. His first assignment: Omaha Beach on D-Day.

When he returned stateside, Morgan learned that his service was only beginning. Outfitted with swim trunks, a dive mask, and fins, he was sent to Hawaii and then on to deployments in the Pacific as a member of the elite and pioneering Underwater Demolition Teams. GIs called them "half fish, half nuts." Today, we call them frogmen—and Navy SEALs. Morgan would spend the fierce final year of the war swimming up to enemy controlled beaches to gather intel and detonate underwater barriers. He'd have to master the sea, muster superhuman grit, and overcome the demons of Omaha Beach.

Moving closer to Japan, the enemy's island defenses were growing more elaborate and its soldiers more fanatical. From the black sand beaches of Iwo Jima, to the shark infested reefs of Okinawa, to the cold seas of Tokyo Bay, teenaged George Morgan was there before most, fighting for his life. And for us all.

Love it! Good amount of detail; held my interest until the very end. George is a true hero.

A unique tribute to Our Greatest Generation

Every tribute I have read, especially about wartime heroism typically focuses on how one aspect of battle made the difference. Each though provides details I didn't know of like many haven't considered. The amphibious landings of D-Day and throughout the Pacific theater are well known overall, but Andrew Dubbins sits down with George Morgan who at the time of the writing was 93. The magic of this book is how vets like George struggle every day with survivor syndrome wanting to forget the horrors they saw, but at the same time understanding the duty to honor his fallen comrades and ensure that their sacrifice is never forgotten.
I've read recounts of the submarines on spy missions, the navy fighting to clear the water, the Air Force softening up the land forces before the marines formed a beachhead for the army. But the side stories are the ones so fascinating and just as important to me. The code breakers who gave insight into the plans and strategy, the oceanographers who understood tides and current impacts, and the UDT force like George who also contributed in their own but unique way.
I would like to meet George and say 'thank you sir!'

Fantastic journey through little known parts of the war

I never would have guessed that there would be so much about WWII that was totally new to me. This book dives deep into a fascinating point of view through these early versions of the Navy Seals. Great storytelling kept me engaged the whole time and I didn’t want it to end. So many visceral details! I really loved it. Can’t wait for the next one!

This book fittingly chronicles the personal stories of the men who made up the first UDT Teams.

This book was a gift for me. My Dad was one of the original UDT members that came over with Draper Kaufman from the Naval Mines Disposal School. We knew he landed on D-Day and in Southern France before heading to Maui and eventually Japan but like George in this book. and others he didn’t like talking about those wartime experiences. This book filled in many of the details of what he experienced but didn’t talk about. The book is a fitting tribute to those incredible men!