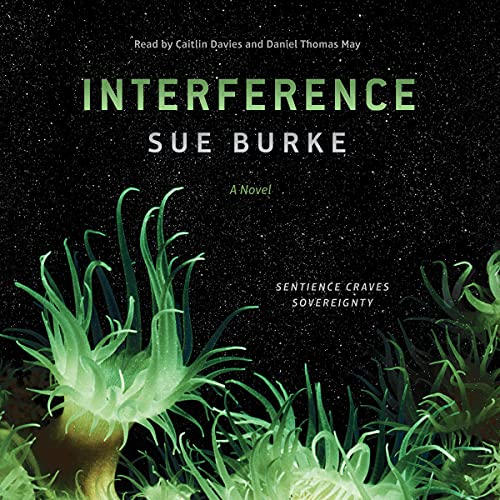 "Narrators Caitlin Davies and Daniel Thomas May reprise their roles, and between them, they’ve once more captured the essence behind the voices of multiple characters, and even more impressively, this time there are non-humans thrown into the mix." (Bibliosanctum)

Sue Burke's sweeping, award-finalist, SF Semiosis epic continues in Interference as the colonists and a team from Earth confront a new and more implacable intelligence.

Over 200 years after the first colonists landed on Pax, a new set of explorers arrives from Earth on what they claim is a temporary scientific mission.

But the Earthlings misunderstand the nature of the Pax settlement and its real leader. Even as Stevland attempts to protect his human tools, a more insidious enemy than the Earthlings makes itself known.

Stevland is not the apex species on Pax.

Not as great and surprising as the first book, but still a pretty good listen

I enjoyed this entire experience. I could barely stop, covering the entire length of the performance in just over two days.

This book fulfills the promises of its predecessor. It gets more creative in the anthropology, and steps up the impressively subtle message about unconscious bias. Each chapter is in a different point of view, so we get six pictures of every character.

What a ridiculous story. WTH?!
These characters are bizarre and make no sense quite often. The botanists are idiots, the anthropologists are xenophobic and many of the characters on this research trip are racist, classist, crazy or just stupid! A lot of characters make stupid or random decisions that make no sense. The narration jumps around in the most random ways inside character's heads... a lot of random, free-expression ramblings... they make connections and use terms that somehow are meaningful. Most characters are negative and underhanded, glum and pessimistic, and they're otherwise angry and distrusting of everyone. What a strange author... narrators did a good job at least.

if you enjoyed the first book, you'll love this.

All I can say is I had a enjoyed this book even more than the first. It surprised me at times, and I enjoyed the technology used, as well as the problems with said technology. I can't wait for the third!

I think I liked this volume even better than I did the first volume. Having familiarized ourselves with the two intelligent species in Rainbow City besides the human colonists, we are slowly led to consider a couple of others over the course of this book, and by shifting point of view between the different parties come to understand something pretty deep about the idea of consciousness and species identity. There are now two groups of humans, the Pacifist colonists and the "Earthlings" who volunteered to investigate what became of the colony now that a couple hundred years have passed. They have diverged considerably in their social systems (though the dystopian tendencies of Earth cultures were already making themselves known at the time the first generation of Pacifists left), so they are properly two distinct collections. Midway though the book they mount a quick expedition to another inhabited continent on Pax where they encounter creatures which are the same and yet different from what they have come to know, giving rise to a number of questions about the origin of life on the planet. At the climax of the story there is violent strife between the different power centers in Rainbow City, and by this time I was able to sympathize with more than one of the points of view (although the one chief bad guy never really does anything to redeem himself much at all). Then, finally, in the epilogue there's another long jump in time, at least for humans, not so much for plants, and the author closes the circle back to an Earth that was still far from a utopia. There is one alien intelligence that remains mostly a mystery, the dangerous corals which seek to encroach on the forest, except for a brief period where their thoughts are translated via technology. There is a kind of epic scope in one way, and yet also a cozy feel because of the way we never lose sight of the most fundamental motivations for all the actors: sunlight and water, warmth and food, family and happiness.

The various narrators are sketched out in an economical way so you can imagine their personalities through their actions and what other characters say about them. The worldbuilding is certainly rather extensive but never takes over from the focus on the characters, which I liked. Important things are constantly at stake and keep the tension up, even when it's time for a festival or just a communal meal.

Starts promisingly with a new mission to Pax. The premise seems good but the plot dissolves into a jumbled mess of too many characters and ideas. Burke abandons the generational structure of the first while maintaining the alternating narration. The book bogs down into innumerable interactions between inconsistently drawn characters with obscure motivations. Much happens but not much makes sense and little if anything is explained or resolved. Tedious.

On the plus side, the narration was again excellent. I would likely rate this higher if the first book had not been so enjoyable.

Having very much enjoyed Sue Burke's first volume of this series Semiosis with an excellent narration by Caitlin Davies and Daniel Thomas May I purchased Interference , her second book based on the planet Pax and was flummoxed by the new novel's energylessness and the sense that this was a sequel for the sake of a sequel. While the various protagonists be they human, plant, animal or something in-between are no less interesting this time around, far, too little of the curious zoological novelty and subtle though steady plotting that I prized in Semiosis is carried over into this follow-up. In truth, I struggled to get to the end and was left as disappointed as a patch of dehydrated rainbow bamboo.

I’m assuming you’ve read or listened to the first book in the series and I really enjoyed it. This is solid, not outstanding. It expands PAX but I felt it could get a bit confusing and I didn’t understand the motivations of some major characters. The story doesn’t appear to be over so I’m looking forward to more depth in the next book but this was an enjoyable addition.

Missed target on this one.

I enjoyed the first book very much. Very clever story. This second part not nearly as good. Found it quite confusing to follow. Left a whole part of main storyline unfinished. Seemed like a bunch of story lines were researched and strung together before they were completed.
Set up for another installment but not sure I’ll risk it after this one.

The trip was better than the destination

I enjoyed the story as it played out and the performers were excellent. The problem was that the story was much more interesting than where it all ended up.

Return of the Bamboo!

I was really happy to discover this sequel and I was not disappointed. More Bamboo please!

Like many highly anticipated sequels before, this is a weak, overly dramatic follow-up in line with Hollywood-style militarism and the adjoining narrative restrictions. I loved Semiosis and suffered through this in hope of that same spake, to no avail. It's as jarring a cut as from Alien to Aliens.