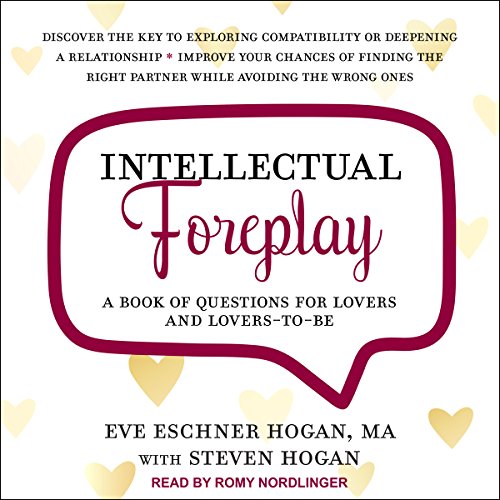 This solutions-oriented guide offers problem-solving and behavior-changing strategies for people working on their most intimate relationships.

The book provides listeners with enhanced knowledge of their own and their partners' beliefs, values, habits, desires, goals, likes, and dislikes; ideas for opening communication and deepening a relationship; skills for making healthy decisions about lifestyles and boundaries; an in-depth understanding of the role of self-esteem in relationships; increased ability to let go of the past and embrace the present; and the knowledge that it is important not only to choose the right partner, but also to be the right partner.

What distinguishes Intellectual Foreplay from similar titles is that it includes guidelines on what to do with the answers it gives. This makes it useful in both creating and sustaining a relationship.

Brought my girlfriend and me closer together

When I played a bit of the audiobook for her —trying to keep to myself how the narrator’s piercing voice irritated me, and sounded like an over-animated Disney character superimposed on a telephone operator recording, with bizarre, almost sexual sharp little gasps before each bubbly mechanical phrase —all the while reciting ideas that felt like those of a neurotic trying to sound empowered while skating on thin reality, held together with some “spiritual” beliefs and antidepressants— my girlfriend didn’t need to hear that the author literally “says thank you out loud when she encounters a parking space in a crowded parking lot”, that the author believes that asking how many sexual partners a prospective mate has had “has no purpose”, and “can only lead to two answers: ‘too many’, or ‘not enough’”, but that asking which way the toilet paper should come off the roll is worthy conversation, or the contradiction of how the author “is grateful when confronted with difficulties” because “she trusts that everything is a blessing, and her task is to see it that way” while putting her foot down that it is “non-negotiable to her that her partner see things this way too”.

The questions were so inane -a seemingly never-ending litany of superficiality- that I found myself feeling that I really didn’t know what to say about it all to my sweetheart as she listened.

But my girlfriend is better at intellectual foreplay than that. The few-second imitation that she did of the pseudo-intellectual audiobook, of the overly-dramatic, hyper-sensualized chipmunk voice, together with an air of “I’m so sexy and smart at this intellectual foreplay, too bad you’re not” was a pure joy to view. And we did talk about the book for quite some time -still do, in fact. We talked about how we despised it often in the same ways, and for the same reasons, we discussed the hows and whys of what we disliked about it, and what it all brought to mind; this has been really fun intellectual foreplay. That my girlfriend understood so clearly everything that I hated about the book and its narration -backdropped against our shared love of words, questions, philosophy, dialogue, and aesthetics - was a perfect example of what the book could’ve been.

Sure, there were some good questions and ideas diluted in the rest of the book, and it’s worth contemplating and discussing these fundamental issues re family, ethics, children, money, etc, when you find them from better sources; but this book and its narration —and voice matters in intellectual foreplay— failed to do justice to the potential of a truly wonderful topic.

This book lacked the intellect and lacked the play that I'd hoped for; perhaps the author and narrator will try again —another iteration, from another angle— as people often do in intellectual foreplay.

Everything you need to have a comprehensive and detailed engagement with your partner!
Handle questions with care and quickly adapt to the best method that works for you and your partner.
Feel free to tweak questions & ask “in the best way possible.”
Filter through things that may be outdated like home telephone, etc and also adapt to the changing environment to include things like texting and checking each other’s phones...
Lastly, know that things change! This book is one for the arsenal - your back pocket! Always pull it out as the phases in your lives change :)