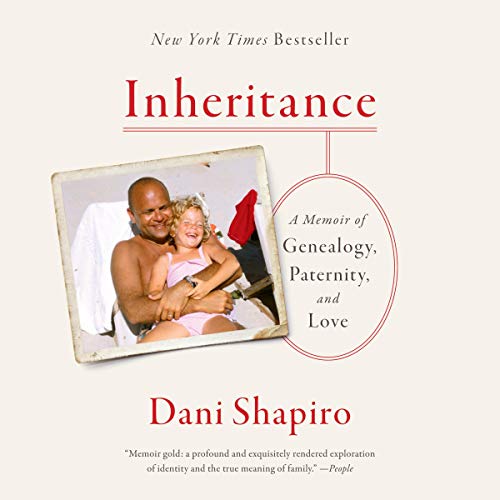 A Best Book of the Year According to Elle, Real Simple, and Kirkus Reviews

"Memoir gold: a profound and exquisitely rendered exploration of identity and the true meaning of family." (People Magazine)

"Beautifully written and deeply moving - it brought me to tears more than once." (Ruth Franklin, The New York Times Book Review)

From the acclaimed, best-selling memoirist, novelist - "a writer of rare talent" (Cheryl Strayed) - and host of the hit podcast Family Secrets, comes a memoir about the staggering family secret uncovered by a genealogy test: an exploration of the urgent ethical questions surrounding fertility treatments and DNA testing, and a profound inquiry of paternity, identity, and love.

What makes us who we are? What combination of memory, history, biology, experience, and that ineffable thing called the soul defines us?

In the spring of 2016, through a genealogy website to which she had whimsically submitted her DNA for analysis, Dani Shapiro received the stunning news that her father was not her biological father. She woke up one morning and her entire history - the life she had lived - crumbled beneath her.

Inheritance is an audiobook about secrets - secrets within families, kept out of shame or self-protectiveness; secrets we keep from one another in the name of love. It is the story of a woman's urgent quest to unlock the story of her own identity, a story that has been scrupulously hidden from her for more than 50 years, years she had spent writing brilliantly, and compulsively, on themes of identity and family history. It is an audiobook about the extraordinary moment we live in - a moment in which science and technology have outpaced not only medical ethics, but also the capacities of the human heart to contend with the consequences of what we discover.

"Fascinating... With thoughtful candor, [Shapiro] explores the ethical questions surrounding sperm donation, the consequences of DNA testing, and the emotional impact of having an uprooted religious and ethnic identity. This beautifully written, thought-provoking genealogical mystery will captivate readers from the very first pages." (Publishers Weekly)

"For all the trauma that the discovery put her through, Shapiro recognizes that what she had experienced was 'a great story' - one that has inspired her best book." (Kirkus Reviews)

"Page after page, Shapiro displays a disarming honesty and an acute desire to know the unknowable." (Booklist)

I bit too long, some things could

I was fascinated with the first half or so of the book. It then started to drag, like she was trying to make a longer book than there was material. The initial sleuthing and contacting the biological family was great. Then the constant proclamations of her love for Shapiro family and lack of the same for her mother grew old.

This book’s target audience (middle class/ upper class women, 45+), should get ready for another “Where have I come from, Where am I going” tale in the groove of such pop classics as “Eat, Pray, Love,” “Wild,” “Under the Tuscan Sun,” etc.
The author narrates the search for her real dad after she finds out via DNA testing that her dad was NOT her actual dad, and this sets off nuclear bombs of epic proportions in her psyche to find out WHO her real dad is.
Fortunately, Dani is wealthy enough and has a flexible enough schedule that she can fly cross country to meet bio relatives, do extensive research on HOW she came into existence (test-tube baby, Beta test), tracking down the doctor’s contemporaries (the doctor being dead himself) and family members to find out how the procedure was done, and who qualified for the program.
Of course, a few key taps on the keyboard and she knows exactly who her bio dad is—a respected doctor and medical ethicist (if the irony is lost on you, don’t worry. The author herself doesn’t think to mention it until the end of her story.) Not gonna lie—I was hoping her bio dad would turn out to be a deeply conservative high-school-only small herd farmer in North Dakota, or the leader of a far right evangelical mega-church deep in the heart of Dixie. But no—her bio dad is so much like her and her own family, it makes it seem that visiting a fertility specialist for sperm treatment will result in a perfect match to you, your lifestyle, your outlook, your Socio-economic class, and your political affiliation. It’s like Match.com for parents wanting to have kids but need help doing so.
There’s lots of matter-of-fact statements that would make a middle class reader take pause—like when the author FLIES FROM THE EAST COAST TO CALIFORNIA JUST TO GET A TATTOO—but you forgive her a little bit for this because her anxiety in not knowing her father Or coming to grips the fact that her “social father” never revealed to her the truth, is almost psychologically crippling to her. I get anxiety worrying about medical tests and what I can make with that pound of burger in the fridge, but the luxury of not knowing exactly who your father is, but having the time and the means to find out, is frivolous gold.

The author does an excellent job reading her book, but I don’t think I’ll seek out anymore of Shapiro’s multitude of books she’s written (which she mentions in her narrative. A lot.) Her world is very “extra,” and kind of inaccessible to older middle class readers like myself.

While marketed as a story of an author investigating her paternity, the truly compelling character in the book is not the author’s father, but her mother, against whom the author seethes and rages, and on whom she enacts a fearsome revenge. It is also true that the investigation of her paternity is a gripping and deeply honest story, with twists and turns to rival any novel. And yet while the story is compelling and moving, is the author able to use it to truly unravel the deepest questions we face as individuals, and as a society tethered to technologies whose ramifications are not fully understood and whose consequences can ripple for generations? Readers/listeners of the final chapters can decide for themselves. In any event, this recording is at times a tear-jerker, at times harrowing, at times surreal or unnerving in its intimacy, at times laugh out loud funny, but at all times, I could not “put it down.”

A more balanced view would make for a richer book. Repetitive

The theme is important, timely, and the writer is definitely sharp and resourceful. It was hard to finish the book though. Very repetitive. Also, her half, not to say all, empty attitude is borderline annoying. Yes, it was a big, difficult surprise and only she knows how devastating it was. But is she really upset because she will go through life having had not only one, but two fathers who cared about her? Plus a brand new sister, who she seems to like. Plus her son now has a grandpa who is alive and some extra cousins as a bonus. Plus having the joy of Christmas added to the joy of Chanukah and so on. Her biological parents went to extraordinary measures to have her against all odds. I did not detect any appreciation for what they did, any good will at all. If what they did was bad, how about the alternative? Also, sperm donors are not naive folks who should know better. They actually help couples struggling with infertility. A more balanced views would make for a richer book.

Listened to Interview? Nothing new in book.

I found the narration a bit plaintive, the depth of the story disturbing. The author seemed devastated and victimized by her discovery. She seemed to relate everything in her Jewish background to her father, yet I thought one inherits Jewish ancestry from oneʻs mother.
She is a much deeper thinker than I am, I suppose. The discovery of her sperm donor father was not exciting to her,
it was a tragedy meant to ruin her life. She blamed her parents so unfairly, they were doing what they thought was right in their time.
I heard an interview on FreshAir and looked forward to the book. During the interview, the major themes and outcomes were discussed. Thus, the impact of the discovery, contact, and resolution was not new.

I could not finish the book.

The never ending angst of the author was wilting. One star each for the story, performance, and overall.

ps The stars all automatically light up and you cannot correct the number.

I want an apology from Audible for recommending

I was very disappointed in this book because it had a lot of potential. The idea is interesting, but unfortunately, this writer isn't and I only made it halfway through the book because I was trapped on a long flight with nothing else downloaded. The main issue is that it was slow and extremely redundant. What she has to say would fit in a New Yorker article. I feel kind of guilty writing this review because it's like slamming a middle-aged soccer mom, but that is somewhat mitigated by the many times she said she was too pretty to look Jewish.

I simple can’t listen to any more. The author is so self absorbed that she can’t tell a story. Don’t waste your time.

Even as short as this book was, and the fact that I love genealogy, this book could not hold my interest. Was it the story or the narration, I'm not sure, but I returned it only partially read. Thank goodness for exchanges.

Author makes too much out of too little...

I have enjoyed Dani Shapiro's books in the past, but I only made it about halfway through this title before turning it off.
I have noticed a tendency in many memoir writers to turn every single thing that happens to them into a full-length book, whether the event merits that sort of attention or not. The first book or two feels fresh, but then it feels like they spend their days mining their lives in search of a story....any story. This was a life twist that was clearly earth-shattering to Ms. Shapiro but feels decidedly less earth-shattering for the reader. She is such a solid writer that I stayed with it for much longer than I might have otherwise, but ultimately her refusal to look past her own nose left me cold.