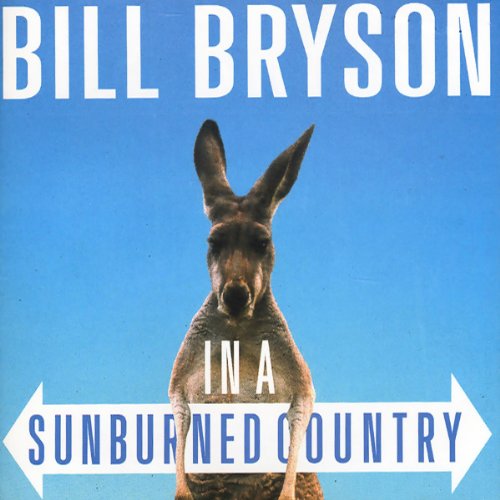 In a Sunburned Country

Bryson, the author of A Walk in the Woods, shifts his keen gaze and comic sensibility from the Appalachian Trail to Australia. A Sunburned Country recounts Bryson's adventures in the land of absurdly hospitable and friendly people, astoundingly dangerous snakes and other wildlife, and continuous sunshine. Bryson's droll narration is the perfect vehicle for delivering his brilliantly crafted observations. My desire to visit the island continent is much more informed after listening to this title, so much so that I feel as if I've already been there! (Jonathan, Director of Public Relations)

Every time Bill Bryson walks out the door memorable travel literature threatens to break out. His previous excursion up, down, and over the Appalachian Trail resulted in the sublime best seller A Walk in the Woods. Now he has traveled around the world and all the way "Down Under" to Australia, the only island that is also a continent and the only continent that is also a country. Australia exists on a vast scale, a shockingly under-discovered country with the friendliest inhabitants, the hottest, driest weather, the most peculiar and lethal wildlife to be found on this planet, and more things that can kill you in extremely malicious ways than anywhere else: sharks, crocodiles, the ten most deadly poisonous snakes on the planet, fluffy yet toxic caterpillars, seashells that actually attack you, and the unbelievable box jellyfish. In a Sunburned Country is a delectably funny, fact-filled and adventurous performance by a writer who combines humor, wonder, and unflagging curiosity. Wherever Bryson goes he finds Australians who are cheerful, extroverted, and unfailingly obliging. They are the beaming products of a land with clean, safe cities, cold beer, and constant sunshine. Australia is an immense and fortunate land, and it has found in Bryson its perfect guide.

Bryson's cheery Australian tale should entertain even the most listless driver. His strength lies in his ability to incorporate astounding facts about the country with nutty personal anecdotes. ( Publishers Weekly)

This is my first book by Bryson but it won't be my last. His wit and satire made this one of the most enjoyable books I have read in a long time. In addition to its humor, the book provides an excellent glimpse of Australia... its history, its people, its cities, and its unique and beautiful sights. I highly recommend this book to anyone who wants to learn about Australia and have a good time to boot. (Memorable quote from the book: "Most people, when sleeping, look like they need a blanket. I look like I need medical attention.")

Travel writing at its best

Fans of Bill Bryson will know what to expect: sharp, scathing, hilariously funny tales from the master of travel writing. If anything, this book is even better than normal because the subject matter is less familiar - giving Bryson free rein to expound on the history, culture(?) and natural perils of Australia. He also narrates the book himself - something that is normally a Very Bad Thing. But he does an excellent job - better, perhaps, than anyone else would have done. All things considered, an excellent book.

I downloaded this because I am planning a trip 'down under' and thoroughly enjoyed it. It is beautifully written, amusing, and extremely informative. Bryson has done an immense amount of research on this country, and imparts it in a thought-provoking, insightful, and funny way. I would highly recommend this to anyone interested in Australia or in travel writing in general. Only a few minor drawbacks keep this from five stars in my opinion: it has a confusing strucutre (I'm never sure which visit we're on) and gets a bit too long and repetitive toward the end.

Wow! I loved this book. I laughed out loud so many times and was completely entertained for the full reading. Bill Bryson is a great narrator. Funny, very funny. I also learned so much about Australia. Fantastic.

Ultimately when you "travel" with with Bill you feel as if you are along for the ride enjoying the sights or puzzling over the oddities of any given location. He describes all the characters or ridiculous situations in which he finds himself in such delightful way that you often feel as if you have stumbled into the fictional word of "The Phantom Tollbooth" (with its odd but well intention inhabitants) but with the thrill of it all having been real. Both history and natural wonders are described with proper perspective to sound quite worthy of one's appreciation. You even enjoy the occasional pause for refreshment, that cup of tea before a day's adventures, or a well earned pint at some colorful pub at the end of a long day. This book allows you to enjoy myriad dangers of Australia's vast and deadly outback without the slightest risk of being reduced to drinking any urine. (a recurring joke only readers of the book will get)
Bryson does his own narration and is one of the few authors for whom this works. His self deprecating tones add humor to the many absurd situations in which finds himself. For example he asks, with the perfectly quizzical note of concern in his voice, "So are you suggesting that I just drown calmly?" after having been advised on how to deal with the dangerous rip currents off Australia's beaches. I had no idea Australia was such a fascinating place. As far as my enjoyment of the audiobook I will quote Bryson who says occasionally if and when appropriate, "I couldn't have been more pleased."

If you listen to this book on headphones on an airplane (as I did), you will disturb other passengers when you laugh out loud. Funny and informative. As with all his books, he mixes personal experience with well researched facts and insights. It is always a treat to listen to Bill Bryson narrate his own work.

Arrive at end. Start over. Repeat.

This book is informative, educational, charming, and hilarious. I've read the paper version and listened to it and will probably return to it once every few years to remind myself of all the poisonous things I need to avoid.

Good but not great.

I am a big fan of Mr. Bryson's "A Short History of Nearly Everything", but did not find this book up to that lofty standard. I was looking for a book with more facts and interesting stories about Austraila rather than drawn out personal accounts about his visit. I found only about 30% of the book is factual and interesting while the remainder consists of "cute" stories of his trip down under. While they are very humerous, I hoped for more history and cultural facts on this great continent.

Funny and informative. I learned so much. I always enjoy Bill Bryson's books and I always laugh out loud. What could be better than to learn and laugh at the same time.

Written with a perfect blend of insightful facts, droll sarcasm, and superlative wit. I was ready to book passage to Australia to go on my own quirky tour after listening to this account of Mr. Bryson's trip across that continent. Not to be missed.

Best book for a trip to Australia

This book is outstanding, contains lot of information and is extremely funny. Billy Bryson has traveled all across Australia and has gathered unique insights. He is always combining his travel experiences and encounters with tons of information about the history, the political situation and prominent characters. His train trip description makes me planning my own vacation trip in the near future.

I have been to Australia several times but Bill Bryson's book gave me unique insights and was a hilarious beach audio book during my summer vacations.

An entirely enjoyable journey through Australia, it's landscape and history. Full of bryson typical dry humour and interesting facts, and inspires to travel this magnificent country, as I am currently doing. I must say that he himself is maybe not the best to lend voice to his own books, as he's a bit monotone, but it doesn't take from the books charm. Listened to it by myself, with foreigners and with Australians and it rang true on many fronts and was fun. Definitely recommend it