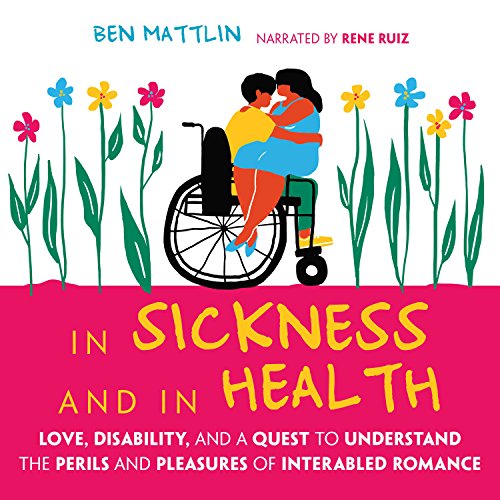 In Sickness and in Health

A frank, humorous exploration of interabled dating, love, and marriage

Ben Mattlin's wife, ML, recalls falling in love with his confidence and sheer determination. On one of their earliest dates, he persuaded her to ride on his lap in his wheelchair on their way home from an Elvis Costello concert. Thirty years later, they still travel like this from time to time, undaunted by the curious stares following them down the street.

But In Sickness and in Health is more than an "inspiring" story of how a man born with spinal muscular atrophy - a congenital and incurable neuromuscular condition - survived childhood, graduated from Harvard, married an able-bodied woman, built a family with two daughters and a cat and a turtle, established a successful career in journalism, and lived happily ever after. As Mattlin considers the many times his relationship has been met with surprise or speculation by outsiders - those who consider his wife a "saint" or him just plain "lucky" for finding love - he issues a challenge to listeners: why should the idea of an "interabled" couple be regarded as either tragic or noble?

Through conversations with more than a dozen other couples of varying abilities, ethnic backgrounds, and orientations, Mattlin sets out to understand whether these pairings are as unusual as onlookers seem to think. Reflecting on his own experience he wonders: How do people balance the stresses of personal-care help with the thrill of romance? Is it possible that the very things that appear to be insurmountable obstacles to a successful relationship - the financial burdens, the physical differences, the added element of an especially uncertain future - could be the building blocks of an enviable level of intimacy and communication that other couples could only dream of?

We meet Shane Burcaw, a 23-year-old writer, who offers a glimpse of his first forays into dating with a disability. There's Rachelle Friedman, the "paralyzed bride", as the media refers to her, and her husband, discussing the joys and challenges of a new marriage and a growing family; and acclaimed journalist John Hockenberry and his wife, Alison, who reveal the intricacies of long-term married life. What emerges is a candid glimpse into the challenges and joys of interabled love - from the first blush of sexual awakening to commitment and marriage and through to widowhood.

"Mattlin expresses himself clearly and succinctly, without an underlying tone of self-pity. His interviews with other couples also portray steadfast relationships where each has thrashed out problems in ways that allow them to stay together. Moving and informative stories of 'uncommonly intimate and enduring' interabled partnerships." (Kirkus Reviews)

“In Sickness and in Health is one of the most refined and accurate pieces of literature that explores the intricacies of being in an interabled relationship. Mattlin’s prose is swift and alluring as he reflects on each couple he encounters and their stories. A fine companion to Miracle Boy Grows Up, this book has the potential to not only encourage other disabled individuals to not be afraid to seek love, but it might also challenge societal perceptions about disability and romance.” (SMA News Today)

“A thoughtful spotlight on often-unheard voices for all interested in how communities define and redefine themselves.” (Library Journal)

We need more diverse books such as this one. People with disabilities are all too often viewed as "less than," by society as a whole. As a person with a disability, it feels incredibly validating to read a book such as this one that emphasizes the inherent worth of all people, no matter what their ability level. Everyone is worthy of love. I would recommend this book to all couples, even if both members were able bodied.