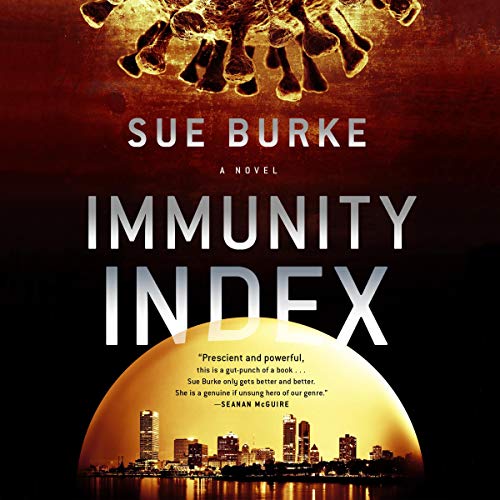 In a US facing growing food shortages, stark inequality, and a growing fascist government, three perfectly normal young women are about to find out that they share a great deal in common.

Their creator, the gifted geneticist Peng, made them that way - before such things were outlawed.

Rumors of a virus make their way through an unprotected population on the verge of rebellion, only to have it turn deadly.

As the women fight to stay alive and help, Peng races to find a cure - and the cover-up behind the virus.

Sue Burke spent many years working as a reporter and editor for a variety of newspapers and magazines before writing her critically acclaimed Semiosis. A Clarion workshop alumnus, Burke has published more than 30 short stories in addition to working extensively as a literary translator. She lives in Chicago.

“Prescient and powerful, this is a gut-punch of a book...Sue Burke only gets better and better. She is a genuine if unsung hero of our genre.” (Seanan McGuire, author of A Killing Frost)

Bought this because I greatly enjoyed her other books, which were original and had nice bit of hard sci fi. This has neither. It's not terrible, just quite a letdown from her other work.

Wish fulfillment... just not mine

This was a very good story. I got invested in the characters, and the eerily-believable future setting is reminiscent of recent William Gibson titles. It was satisfying along numerous dimensions, many of which are topical right now. I imagine M Burke got a lot of pleasure in how she conveyed certain concepts and archetypes.

What this book is NOT--and I'm not saying anywhere that the material represents otherwise--is a follow-up to the Semiosis Duology. Don't expect the content to bend the way you think about consciousness, community, or communications.

The performance here was good. I would have liked a LITTLE more differentiation between the voices of the protagonists, but I recognize that the similarity is exactly the point of the story.

In summary, if you understand this genre you will probably like this title.

Rocked me from page one!!

Burke did a great job with this book - much of it resonated with the protestor/baby boomer in me. If anything brings it down, it’s the reader - she didn’t differentiate between the voices enough, and gave no pause when starting a new narrator/speaker. The geneticist was almost a parody of the bad guys from old cartoons.
Absolutely LOVED the portrayal of the president and his foolish followers. Sensitive handling of people who had never examined the lies before. Good job, Sue Burke!

What is this book about?

I really liked Semiosis and thought I'd try this. it's like it's written by a different person. the story doesn't draw you in. it's like you get thrown into the last act of a play. there's no suspense about what will happen and the characters are interesting but they don't arc. the theme of genetic manipulation isn't developed at all; I'm not even sure why these girls had to be clones. the voices were great; good distinct voices for the girls and lots of emotion. too bad the story was such a let down

A story deeply influenced by the 2020 pandemic

The events of this book are set in a medium near future world somewhat different from ours- people talk about coronavirus without ever mentioning Covid19, under a federal administration that favors the wealthy and privileged which no one compares to the Trump Administration. This can be an advantage when it depicts features of life we have become familiar with over the last year and a half ourselves, but may also be distracting when we notice things which don't match our current situation. Where was the anxiety of being in crowds of strangers, the hand washing, the gigantic social media corporations? Of course it doesn't mean anything for these to go without a mention, but it's hard to ignore the nagging reminders of the present pandemic.

We see the action of the novel through a group of young women all living in the upper Midwest who share a secret that could prove to be damaging to them. The technology is an extrapolation of what we have now (self driving cars, genetic manipulation) but with food shortages, and still the same kind of cultural and political divisions we see in the US and between the US and other nations. There are engineered animals including a mammoth but mostly appearing only as tourist attractions (though engineered animals are mentioned at one point). The women are in peril at different points, trying to understand what is happening, lied to by people in authority. The additional character of genetic expert Peng, who is sequestered while a pandemic threatens to overwhelm the country, takes on a kind of thriller aspect.

As to the story structure, things are told in parallel points of view by the different characters, which was rather confusing for me in audiobook form because there was no discernable demarcation between one story and the next so I really had to pay attention. There are shadings of character suggesting how the women have different personalities owing to the influence upbringing and wealth along with their different ages. When the situation with the pandemic begins to spiral out of control they each have a tense scene full of chaos and pluck, but there is no overarching narrative that pulls everyone along while they struggle to survive and to help others. The relationship between Irene and the woolly mammoth Nimkii she is caring for is the most touching one in an understated way. It all kept me going without really having a big climax and denouement. The antifascist social commentary is definitely there to see but there are no scenes of preaching a message or calling people to change their ways.

I think the audiobook narration did help to make the characters seem more like individuals with different lives.

gimme some of that old-time freedom

Not so much a dystopia as just a lousy place to live, this novel takes place in a US ruled by a strongman. You may not find such a setting compelling. If not, don't bother picking this one up.

Otherwise, it's about some young women, whose connection with each other is not initially apparent. Oh, and a geneticist too.