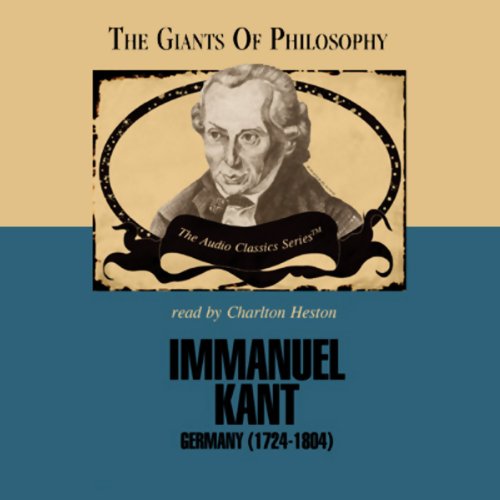 Immanuel Kant's "transcendental" philosophy transcends the question of "what" we know to ask "how" we know it. Before Kant, philosophers had debated for centuries whether knowledge is derived from experience or reason. Kant says that both views are partly right and partly wrong, that they share the same error; both believe that the mind and the world, reason and nature, are separated from one another. Kant says that our reason organizes our sense perception to produce knowledge. The mind is a creative force for understanding the manifold of new, unconceptualized sense impressions with which the world bombards us.

The Giants of Philosophy is a series of dramatic presentations, in understandable language, of the concerns, questions, interests, and overall world view of history's greatest philosophers. Special emphasis on clear and relevant explanations gives you a new arsenal of insights toward living a better life.

I suspect I will have the same thing to say about all of the books in this series, as they are all narrated by Charlton Heston and are similar in quality. The recording is also excellent. These books are a lot of fun as they are concise, easy to understand, clear on the main points, and masterfully read. Although my political leanings kept me from being excited about downloading a book read by Charlton Heston, I have to admit that he has a style and flair that make the books very listenable. The "European" accented readings of other philosophers by other actors are a little cheesy at first, but do help with the atmosphere.

Why the goofy accents?

to Kant and his line of reason. I have read Kant and can recommend this book as a good introduction to difficult work for someone who is less acquainted with philosophy. Kant is not at all easy, and reading this book first will make one familiar with the basic premises with which he will be dealing.

The only meaningful parts are narrated by a guy with an accent, ostensibly to bring Kant’s words “to life,” but the accent is so bad it’s distracting and you can’t really parse the words. I thought maybe Heston would be entertaining, but now I realize his forceful, slightly aggressive style actually just triggers my patriarchal trauma. To be fair I thought this would be an actual reading of Kant’s work, not a biography, so if you’re thinking what I was thinking, look elsewhere.

Heston gives "foreign accents" to Kant and other philosophers. This is VERY DISTRACTING. He presents Kant, and in at least one instance, Rousseau, as speaking in heavily accented English. Would hate to hear him doing the German Idealists.

I have enjoyed this series, but the overblown German accents in this particular episode detract from the experience.

I love his movies, but old Heston is an even better narrator. plus Kant is amazing of course

Charlton Heston is a very good reader, however the idea to recite quotes with very strong accents is not only dumb and so pronounced to be bothering, but it makes following the discussion harder.

The topics explored are very complicated, I'd suggest to listen to it only if you can really focus on the content at all times.

A most excellent introduction to Kant

Kant is difficult and this book is a nice introduction to his life/work for the general audience.