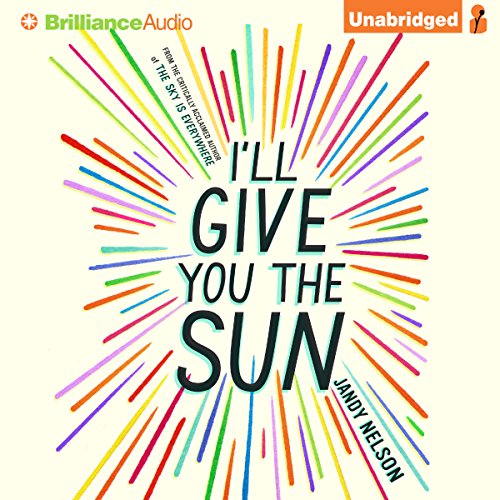 I'll Give You the Sun

“We were all heading for each other on a collision course, no matter what. Maybe some people are just meant to be in the same story".

At first, Jude and her twin brother are NoahandJude; inseparable. Noah draws constantly and is falling in love with the charismatic boy next door, while daredevil Jude wears red-red lipstick, cliff-dives, and does all the talking for both of them.

Years later, they are barely speaking. Something has happened to change the twins in different yet equally devastating ways...but then Jude meets an intriguing, irresistible boy and a mysterious new mentor.

The early years are Noah’s to tell; the later years are Jude’s. But they each have only half the story, and if they can only find their way back to one another, they’ll have a chance to remake their world.

From the acclaimed author of The Sky Is Everywhere, this exhilarating novel will leave you breathless and teary and laughing - often all at once.

Portrait : Self Portrait, Girl with a Galaxy for a Ribcage and a Whale for a Heart

DO NOT GIVE THIS BOOK TO ANY LGBT YOUTH

This book does no good for LGBT youth. While it brings up huge emotional issues many LGBT youth experience it does not deal with them, let alone in healthy ways. There are not repercussions of these issues. The emotional gauntlet of one partner being out and the other still in the closet, solved off page, literally in one walk through the woods. The coming out process? Glossed over, no one cares. Suicidal actions made repeatedly by LGBT character. No biggie, he just needed to be yelled at.

This type of narrative renders REAL LGBT problems to be inconsequential at best and attention seeking at worst. But sexual exploits of the heterosexual variety are gamed out in detail multiple times.

There are no healthy, emotionally supportive relationships in this book. None. Several also border on abusive in DANGEROUS ways. Don't give this book to teens.

The prose is extravagant and it would be easy for many to focus on that fantastical lens these actions are seen through. But sexual contact of dubious consent involving a 13 year old, suicidal actions, PTSD, and emotionally manipulative parents should not be glossed over by fluffy prose.

Jude and Noah, male and female twins are opposite, yet one, and sibling rivalry runs high. Both apply to a prestigious art high school, desperately seeking approval from their mother. Noah views every situation as a portrait and nervously fidgets, drawing what he sees. He paints, she sculpts and both believe Noah is the favorite and a lock for admission.

Nelson is a fabulous writer, giving Noah a quirky sense of humor, narrating from the age of 13-14 and edgy angst to Jude, narrating from their current time; age 16. There are strong themes, including a tragic event, first love, rivalry, lies, and the desire to belong and be accepted. Both narrators did a fantastic job, sounding just as I'd picture their characters. Don't read other reviews giving away too many details, just enjoy this amazing and well-written coming of age story. If you liked "The Perks of Being a Wall Flower", you will love this. If you haven't read that one, read/listen to both.

Yes, this is technically a Young Adult novel, but in my opinion, it's categorized as YA because it's ABOUT young adults. It is however FOR any reader at any age.

Noah and Jude are paternal twins and they are both artists. I’ll Give You the Sun is about their dynamic relationship during their teenaged years.

I could not stop reading this book. It perfectly captures the emotional volatility of growing up, but more specifically growing up as an artist. The story of Noah and Jude is weaved beautifully and unpredictably throughout, as the author jumps back and forth between perspectives and time periods.

To call Jandy Nelson's language descriptive or colorful would be an understatement. And to say that she has a mastery over the modern teenage vernacular would be missing the point. Her luminous use of metaphor gives you entreé into the twins' minds, and allows you to see the world from their individual and distinct points of view, which only makes you love them even more and care about their personal and artistic trajectories.

I'll Give You the Sun packs a mean emotional punch which will knock you on your ass and make you want to dance at the same time.

The chapters alternate between the points of view of twins Jude and Noah in order to tell the story of how they grew apart and quit communicating with each other when their family their family faces some problems. Jude's story takes place when the twins are sixteen,after an important family event, while Noah describes what happened when they were 14, when the problems began. It's one of those books where the story unfolds slowly, all of the puzzle pieces eventually fall into place and the reader breaks out in goosebumps (at least I did!)

Art plays a huge role in the lives of the twins, since their mother teaches art, Noah expresses himself through his nonstop sketches and painting, and Jude has a flair for sculpture. The beautiful metaphors and visual imagery that Jandy Nelson uses to describe not only the scenes, but also the feelings of the characters strongly mirrors the references to art that are throughout the book. It's almost like one very long poem, and the reader becomes immersed in the colors and mood of the descriptions. The writing was simply stunning, and I felt an emotional connection with both of the characters.

Julia Whelan is one of my favorite female narrators, and she did an excellent job portraying all of the emotions Jude went through in the book. She can build the suspense and voice heartbreak. I love her voice, and her pacing was perfect.

I loved this book!!! It was probably my favorite listen as well. The narrators captured the spirit of Noah and Jude perfectly. There were (hour to almost two hour long) chapters that I listened to and then started them over again just because it was so beautifully written and told! I didn't even realize this story was considered YA until I finished. Like another reviewer said, I think it was categorized as YA because it is ABOUT young adults.It is beautiful, romantic story of love and loss that has easily become one of my favorite books.

I had this in my wishlist for so long and wish I had bought it sooner. If you are trying to decide on a book, PICK THIS ONE!! You will not regret it!!

I cannot express how completely in love with this book I am. I want to listen to it again and I'm sad that it's over.

Jandy Nelson uses such amazing descriptive language, literally painting the emotions for us. I was amazed at how similar and how different she was able to write the twins in both actions and feelings. Noah described everything with colors.... Jude with movement, capturing their unique personalities.

The book kept me listening intently throughout the entire thing. The story line was interesting enough to keep me wondering what was going to happen. The emotions the characters describe were incredibly real. Everything did get wrapped up in a nice bow, which can be disappointing, but honestly I fell head over heels for these characters and wanted nothing more than a happy ending.

My heart beated so hard while listening!

You can Google me for the rest of the review! I have a whole review of this book in my Blogger and Wordpress blog:

I am in the same kind of state of ecstasy that I got in when reading “Aristotle and Dante discover the Secrets of the Universe.” If you loved that book that much to the point of almost going crazy, you will love this book like you love to lay down on a Sunday afternoon under your blanket reading a book while it is pouring outside your window. This weird and lovely chilly warm that you feel going through your body is the sensation that I got while reading this book.

I am a 35 yr old woman and I absolutely loved this story. All of it. Though it may be classified YA, the themes transcend age and are something many can relate to - love, death, relationships, lies and truth. I can absolutely relate to the idea of running away from pain and at the same time abandoning your true self.
Both narrators are fantastic and add tremendously to the charm of this book.

I highly recommend this book to anyone that likes coming of age and family relationship stories.

This audiobook was unputdownable. As much as it is a young adult love story, I have never read something so heartwrenching and heartwarming at the same time. The story is absolutely beautifully crafted and so full of emotion, one tide after another, and although the characters are far from perfect, even far from good for that matter, somehow they make you want to make them happy. So badly. Because as fictionally beautiful they seem, I can imagine them being flesh-and-bone humans. I remember three fourths into the story when things went terribly awful and raw, thinking to myself no it's never ever gonna work out and I'll be crying tears of regret when the book ends, but I was proven wrong. Perhaps my only concern is that, perhaps, the mishaps and the coincidences and the perfect ending at the end, seemed to stretch luck a little too far, and I have trouble imagining this storyline in real life, though for the record (haha Jude) I wish more than anything for this artistic world to take me in. The narration was clearly delivered, with perfect emotion for the teenagers, especially the girl, and the dialogue was done seamlessly. I recommend this to anyone looking for a miracle.

I couldn't even finish this book as it was so bad. I couldn't seem to get into the characters and found the narration sub par as well.

I loved the book as well as the performance! I can only recommend it to everyone.

never loved a story as much as this one, an emotional rollercoaster but in a beautiful way. love the readers voices and characters. 10 out of 10.

Slow burn and then...

This is a slow burn. In the beginning. Occasionally, listening to the first half of this novel, I was on the brink of giving up. But I’m so grateful I did not. When the narrative comes together (and I’m pretty sure the pacing is completely intentional), the story burns bright. So bright.
Lies, Loss and Love can form a mixture of pure bliss. Jandy Nelson found the recipe for it. And damn, does it taste good.