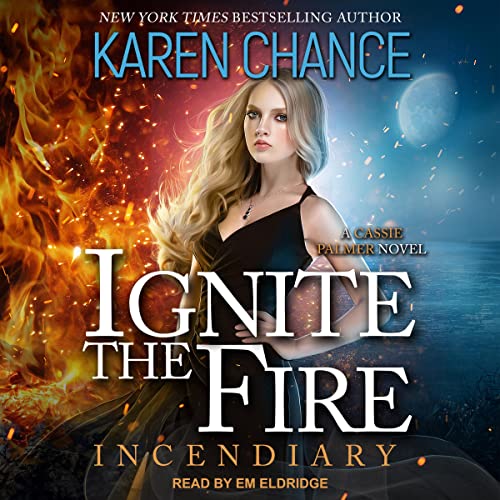 Cassie Palmer is the Pythia, chief seer of the supernatural world. John Pritkin is a half demon and a legendary war mage. Mircea Basarab is a first-level master vampire and the general of the World Vampire Senate. Each is formidable enough alone. But they recently discovered that, together, they are far more than the sum of their parts. With their power combined through a perilous spell, they are the closest thing left on Earth to one of the ancient gods.

That comes in handy, considering that the old gods are exactly what the supernatural community is currently fighting. But now, their triumvirate has been torn apart. Mircea and Pritkin are lost in Faerie, with Mircea pursuing a personal mission five hundred years in the making. Meanwhile Cassie finds herself facing down an ancient adversary on her own. To survive, the three must find a way to come together, even worlds apart, and take their union to a new level.

waited so long for this to be released!
Delay after delay, and the decision to split the book in half was annoying enough. Not to release both parts at the same time was another bad decision. BUT to allow the audio to be released with this poor poor reading is unforgivable!. I have been a Kindle and Audible customer from the very beginning, I have never returned a book for poor performance. this will be the first time!. I refuse to pay for text to speech FROM audible. My Kindle can do for free with almost the same voice and lack of emotion. Shame on all who was involved with this! Cassie Palmer deserves better, and all Karen Chance fans, who waited forever for this book deserve better.!

I love this series but I cannot stand how the narrator reads this book. Definitely a no from me. I will read the book and request a refund.

Unfortunately, Karen Chance’s move to independent publishing has come at the cost of the audiobook - so necessary to those of us with visual impairment. The narrator, Em Eldridge, is incompetent. How she wasn’t fired at the end of her first recorded paragraph is beyond me. A computer-generated voice would not be worse. The story is, as usual, wonderful.

I thought a computer was narrating at first.

I seriously looked to see if there was a name listed as the reader. It was so bad I took much longer to finish the book than usual because it was so painful.
Such as (in a flat tone), 'Oh. no. I'm in. danger' or 'I just. love. them both. so much.'
There was no passion or change of tone except on occasion. With the plethora of amazing narrators out there, who decided that THIS performance was the best one?!!? She has a nice voice and the book would have been much better without the monotone computer voice.
I love this series and Karen Chance books, but I was so disappointed this time.
The story was good and was probably better than I think because I had trouble following along with the reader's voice.
On the plus side it did help me fall asleep faster and I wasn't kept up late wanting to hear more of the book....

the worst narration ever

I love Karen Chance's book and always buy both print & audio so I can re-listen to the stories. However, this narrator is horrible and sounds like a robot.
The author did post a poll on her blog before choosing the narrator as the original one wasn't available. Both the choices were equally bad and this one seem to be the winner among those who voted.
The book is five stars and the narrator is zero. I'm giving a one star review hoping the author will choose a different one for the next book.

I absolutely love the series. the books are all amazing. and this one does not disappoint.

The only problem is the narration. She drags out every word and sentence. Way to much pausing. I don't care for how she reads the voices of other characters as well. I might just be bias because I really enjoyed the previous person who read the books.

Book is amazing tho! Karen Chance is such an amazing author! Can't wait for the next!

i absolutely LOVE this series but this narrator just drags the words out unnecessarily, she puts no emotion into any of the characters. i couldn't even make it 4 minutes into my favorite series.....ill just read it instead of listening. thank goddess i used a credit for this instead of money.

However, the narrator is speaking with zero emotion and is pacing like a robot.

I am refunding the audio-book.

Loved the story but

I love this series. I’m so thankful that Karen Chance decided to self publish and keep the series going. BUT The narrator is awful. I will probably start reading the series instead of getting the audiobooks if this narrator continues. Usually I can get used even an average narration after an hour or two into the story but her pacing was strange almost like she was reading a math text book instead of a novel. There were a few moments where I thought she was getting into the story and was going to put in more effort but she’d go right back to reading like she was bored. Monotone and the same voice for Pritkin and Mircea actually pretty much the same voice for every male character. I don’t think she did any research into the characters before she started her narration. Audible should allow us to rate narrators too.

It was easy to get lost…

This book is all over the place. Lots of action. The narrator did a nice job.