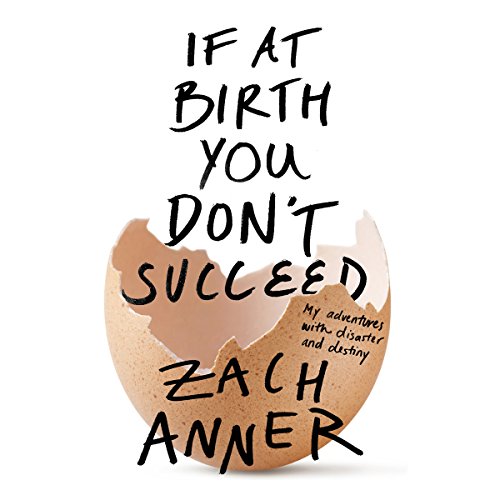 If at Birth You Don't Succeed

If at Birth You Don't Succeed

Comedian Zach Anner opens his frank and devilishly funny book, If at Birth You Don't Succeed, with an admission: He botched his own birth. Two months early, underweight and underprepared for life, he entered the world with cerebral palsy and an uncertain future. So how did this hairless mole rat of a boy blossom into a viral Internet sensation who's hosted two travel shows, impressed Oprah, driven the Mars Rover, and inspired a John Mayer song? (It wasn't "Your Body is a Wonderland".)

Zach lives by the mantra: When life gives you a wheelchair, make lemonade. Whether recounting a valiant childhood attempt to woo Cindy Crawford, encounters with zealous faith healers, or the time he crapped his pants mere feet from Dr. Phil, Zach shares his fumbles with unflinching honesty and characteristic charm. By his 30th birthday, Zach had grown into an adult with a career in entertainment, millions of fans, a loving family, and friends who would literally carry him up mountains.

If at Birth You Don't Succeed is a hilariously irreverent and heartfelt memoir about finding your passion and your path even when it's paved with epic misadventure. This is the unlikely but not unlucky story of a man who couldn't safely open a bag of Skittles but still became a fitness guru with fans around the world. You'll laugh, you'll cry, you'll fall in love with the Olive Garden all over again and learn why cerebral palsy is, definitively, "the sexiest of the palsies".

I thought I did pretty well, to be honest. But I guess I'm kind of biased.

Review from a professional narrator

Not often can an author of a book be their own narrator. In this case though, no one could have read this book the way Zach does. His comedic timing is excellent. His tone in the serious parts held me close to the story. In general, I found it well done in all aspects. As one who does narration for a living all I can say is, Great Job!

I was late to the Zach Anner fan club, so by the time I knew anything of his body of work, his book was already slated for release the next month. I found that he was just as hilarious as he was endearing. As the pretty much negative person as I am, I found his optimism and positivity void of the preachy nature I find most folk with such enthusiasm; which made me love him even more.

I had no idea what to expect from his book, just that I was sure I would laugh along with him and his particular brand of humor. What I found in listening to him speak about his life, was that his honest heartfelt nature nearly brought me to tears many times, not because of anything to do with his disability, but because of his overcoming a very real problem we all face at junctures in our lives; despair.

I needed this book. I've spent most of my life waiting for something so profoundly positive to happen to fill the chasm of negativity I had dug for myself, never even stopping to think that I could simply make the conscious choice to be more positive. As cliché as it seems, there is truth in that sometimes the easiest solutions are the hardest ones to see.

Though I may never get to thank him in person, and he'll more than likely never read this, I would like to thank him. So thanks Zach, a million times over, you are an amazing human being.

This book is hilarious. I feel like Zach is my close friend after reading this book. Great job Zach!

Much love and admiration

loved the book...real life doesnt always have to be depressing. i myself have struggle with a mild form of CP for going on 43 years, but aside from all the taunts, ridicule and misguided questions as to why i walk or run the way i do, i have surpassed all that the doctors expected of me. Thanks for being you and for sharing yourself with us 💜

Beautiful Person - Everyone Needs him in their life!

Read by Zach himself, this book gives you 10 + hours of the fantastic inspiration that he givea daily. Bring him in your world. Smile some!

Inspiring and hilarious. Glad I heard it from him.

Glad I heard it in his voice. His delivery was great and gave me lots of feels. "I'm ashamed of the Retard!" Hilarious!

I listened to this book as fast as I could. It's funny (OK, hilarious), irreverent in places, poignant in others. Zach neither lets himself be defined by his physical limitations nor glosses over them and pretends his life is easy. As a woman with a disability (admittedly different from Zach's), I found myself agreeing with him on many fine points of disability etiquette, nuance, and finding your way.
A piece of advice, though: do NOT listen to this book on the bus; you'll be laughing so hard that people will look at you funny...

Inspiration Among the Dick Jokes

Wanted to hear his autobiography ever since I heard he was publishing one. What I thought was to be a bunch of short funny stories about his life and experience turned to be that plus more. Despite being a fan of Zach Anner, the persona, I had no idea of who Zach Anner, the person, was. No one warned me he could be so philosophical while talking about water slides and The Olive Garden. Greatly enjoyed listening to this. Thanks Zach!