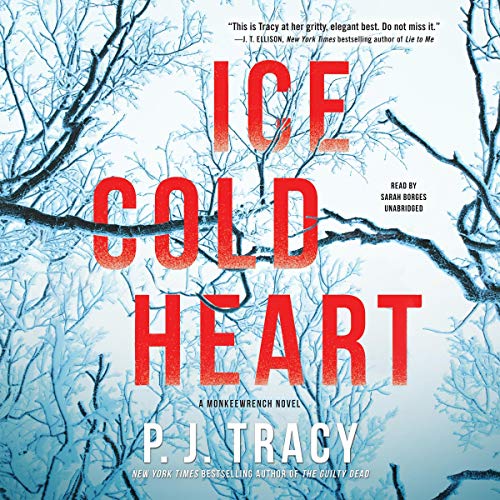 It's a bitter winter in Minnesota - too cold to kill. There hasn't been a murder for a month, but the lull quickly comes to an end for Detectives Leo Magozzi and Gino Rolseth, when they're called to the gruesome homicide of Kelly Ramage. Found in a friend's vacant house, this was no random attack, and clues reveal that she was living a very dangerous secret life.

Magozzi and Gino trace her steps back to an art gallery where she was last seen alive. The gallery seems like a dead end, but the art is disturbing and exploitative. It may very well be inspiring a sadistic killer, because in this instance, art doesn't imitate life, it imitates death.

Tipped off about a year-old murder that is a mirror image of Kelly's crime scene, Gino and Magozzi enlist the aid of Grace MacBride and her eccentric, tech genius partners in Monkeewrench Software to help them decipher the digital trail that might connect the cases.

As coincidences emerge, Magozzi, Gino, and the team have to work around the clock at breakneck pace to unravel a series of clues that form the framework of a larger, more sweeping, and insidious conspiracy than any of them could have imagined. Is Kelly the last person to die, or just the most recent? And is there any way to stop it?

Love the book not the reader

I like the book, monkee wrench series is always good. However the reader does pronounce words incorrectly and that can be a bit off putting.

Liked the story dislike the narrator. Ms Borges has no understanding of sarcasm or snark. Please go back to one of the other narrators.

Tried, really tried to get into the book but, as with the previous one, had to stop and purchase the kindle version. This narrator isn't able to pull off the many male characters who are featured in this series, most of the time it's tough to tell who is supposed to be speaking. There is so much wry humor in these books, wonderfully expressed by Buck Schirmer in his narration and it's all missing in these last two. These were offered at a reduced cost and I purchased them at the same time. Won't make that mistake again.

Great story, intriguing narrative, but the narration and the horrific attempts at a Minnesotan accent moved from comical to painful as the story pressed on. Still worth a listen!

Great story with many twists

The first Monkeewrench book was a humdinger and Dead Run was another good one. Snow Blind started like a house afire but I didn't care for its finale. I read almost all if not all the others... Mostly my enthusiasm waned.

I thought this one was closer in pace to the earlier ones I liked. MANY plot strands: A woman with an older rich husband is cheating by dipping a toe into kink. Bad decision. Roadrunner saves Petra, a neighbor, from freezing to death -- she didn't try to kill herself but didn't try to avoid death either. She bonds with Roadrunner -- they have a history of abuse in common . Hers is from experiences in the old country: Bosnia (her job now is tracking down war criminals). His when a secret from his past is revealed. She decides to live after two detectives come to question her the next day -- one of her few friends, a woman from the old country, has been murdered. Petra thinks she knows who did it but hides what she knows and determines to get revenge. For somebody who tracks down criminals for a living, she is incredibly impulsive and lacks any planning skills whatsoever. Her actions are frankly stupid.... Glad Roadrunner found somebody but I'm not thrilled with her becoming a regular cast member. During their investigation, Magozzi and Gino visit a gallery whose current show is sculptures about torture of women. Protesters include a woman whose sister was murdered in another state -- with remarkable similarities to Magozzi's and Gino's current case. Finally, Monkeewrench is investigating a heist of cryptocurrency. And of course all these storylines are woven together.

Narrator is a tough listen

This story OK. Be sure to sample first to see if you can tolerate the bad, fake Minnesotan accent. I find it and the mispronunciations of Minnesota landmarks a tough listen. Battled through and finished anyway.

What an extraordinary novel. I thought I was getting a run-of-the-mill, paperback mystery. Instead, I heard a novel haunted by memories of the fall of Yugoslavia, and richly peopled by characters impacted by that conflict.

This novel goes to some very dark places. For me, that darkness was balanced by so much love, courage, and healing, that it was bittersweet and nuanced rather than depressing.

It also reminded me that the US is filled with refugees from conflict zones, and we never know what our neighbors have had to endure to be here. A little kindness can have a large impact.

This novel was also beautifully narrated.

This one is staying on my “saved to read again” shelf. I got it free with my audible subscription, but it was absolutely worth a credit. Now I’ll have to go back and read the earlier parts of the series. The MonkeyWrench crew are supporting characters in this book.

Please go back to the old narrators!

I LOVE the Monkeewrench series, but I'm very glad this wasn't my first book to listen to. I enjoyed the story, but it was a struggle listening to this narrator. Please bring back Buck Schriner!!!! He IS the voice of these characters! Or at least please use a male narrator.

This was my first read from this author and the storyline was excellent. I completed it in about 4 days, but was because I listen while I work. When I am I interrupted I tend to rewind some. I remained engaged throughout the entire book. The reader did a great job with all of the characters. He tones changed with different situations and personalities. It was also a free book...👏🏽👏🏽👏🏽👏🏽