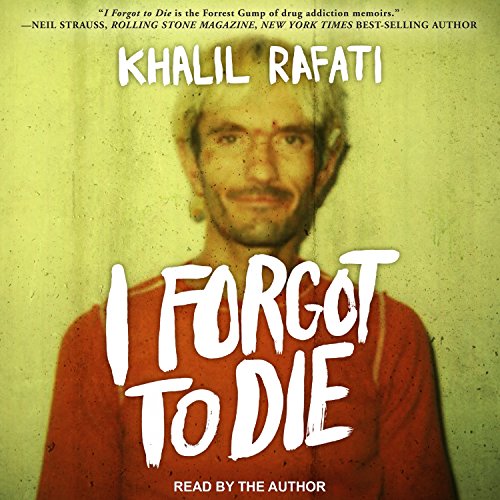 I Forgot to Die

I Forgot to Die

Khalil Rafati went to Los Angeles in the 1990s and had it all. He was working with Hollywood movie stars and legendary rock musicians, but it wasn't long before he found his way into the dark underbelly of the City of Angels.

When he hit rock bottom - addicted to heroin and cocaine, overtaken by paranoia and psychosis, written off by his friends and family - he grabbed a shovel and kept digging. At 33, Khalil was 109 pounds, a convicted felon, high school dropout, and homeless junkie living on the infamous Skid Row in downtown L.A.

So how does someone with nothing, who feels like they deserve nothing, and who just wants to end it all turn their life around?

I Forgot to Die is an incredible true story of pain, suffering, addiction, and redemption - and how one man ultimately conquered his demons and wrote himself a new life story.

I have read many addiction memoirs & this is by far the most intriguing, exciting, & helpful books I have ever read. I absolutely loved this story & believe many other people will to! I will most definitely be suggesting this to my friends and family. Truly AMAZING.

Jails, Institutions and Death is a term oft recited by members of Narcotics Anonymous when describing the inevitable destination of a person in active addiction. I hungrily consume addiction memoirs in that way that people feel compelled to slow down and peer at a horrible accident. Some might think this is a character flaw, but I think of it more as a gratitude check--"There, but for the grace of God, go I".
"I Forgot to Die" doesn't disappoint. It is the story of a man who should be dead. It is the story of a man who wanted to die and tried to kill himself on the time payment plan of addiction.
Khalil Rafati tells a story that is sad, but not that unusual. His father was verbally and emotionally abusive, his mother was devoid of a spine and unable to defend him. His childhood home was a cold, unfriendly, unsafe place--the kind that often breeds psychopaths. Khalil was not a psychopath, in fact, he more resembles an empath in his account.
In his addiction, which was severe and life-threatening, he was abusive to the people closest to him, but that is true for most addicts. At other times, he expressed love and gratitude for the people in his life who reached out to help him. Some were enablers who only prolonged his nightmare, but others were angels of mercy.
All recovering addicts are miracles, but Khalil's story stands out. He was a boy, then a man who invested all of his energy in trying to be comfortable in his own skin. He distracted himself with drugs, women and money until there was nothing left but himself-barely alive and there he received the gift of despair and began the climb out of the grave he had dug for himself.
Ultimately, this is a story of pain, degradation and redemption. I would recommend it to anyone, but I think that addicts and their loved ones who read this book may gain insight, sympathy and most importantly, hope.

Best book I've ever listened to. Crazy story that everyone should hear. Rags to riches

I love this book what a amazing man .. he is so inspiring .. some of stories made me cringe because I to see people throw there life away .. but I'm so glad that he got it together and the tools he used to get there .. i never did hard drugs or anything like that I would recommend this book to anyone suffering from depression and abandonment.. this book changed the way I think moving forward .. you just gotta learn to drop your story( all the bad stuff that happened to you ).

No Christmas for junkies

Sure, because I don't regret the book, but I doubt I'll listen to it a second time.

Would you recommend I Forgot to Die to your friends? Why or why not?

I'd recommend the book to people struggling with addiction, or those who enjoy biographies/autobiographies about addiction. There were some religious undertones, but nothing too heavy, so that would also shape my recommendation too.

Typical story about overcoming addiction, but worth a read.

It was pretty difficult to listen to the whole story as Khalil was going down into his spiral; listening to why and understanding and relating was heavy. I thank Khalil for sharing his story because in the end, as hard as it was to hear, he shared truth and beauty. Thanks Khalil.

Overall well written, great narration (which for me can make or break a book), and cohesive story and journey to wellness. you wanted to to root for him. i would have liked even more graphic drug useage stories, b/c I am sure they were edited out possibly due to his new 'status' but it was good nonetheless

great story. the fact that the author tells it makes a huge difference. It is incredibly moving all the way trough. it caught me in the first page!

One of the best memoirs ever

So raw, humble, real and unfiltered. A graphic but necessary uplifting story for anyone who ever questioned his or her ability to turn things around. Highly recommend.

You want to get someone off drugs?

Give him this book! It is frightening like hell and i cried half way through.