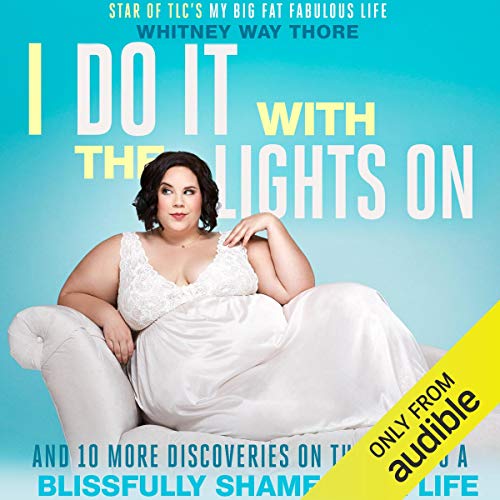 I Do It with the Lights On

From the star of TLC's My Big Fat Fabulous Life and the YouTube sensation "A Fat Girl Dancing" comes an empowering memoir about letting go of your limitations and living the life you deserve. Right now.

Whitney Way Thore stands five feet two inches tall and weighs well over 300 pounds, and she is totally, completely, and truly...happy. But she wasn't always the vivacious, confident woman you see on TV. Growing up as a dancer, Whitney felt the pressure to be thin, a desire that grew into an obsession as she got older. From developing an eating disorder as a teenager to extreme weight gain in college to her ongoing struggle with polycystic ovarian syndrome (PCOS), Whitney reveals her fight to overcome the darkest moments in her life. She holds nothing back, opening up about the depths of her depression as well as her resilience in the face of constant harassment and mistreatment. Now Whitney is on top of the world and taking no BS (body shame, of course). And she's sharing the steps she took to get there and the powerful message behind her successful No Body Shame campaign. She even reveals her favorite F word (it's probably not what you think), the thrill of doing it with the lights on, and the story behind the "Fat Girl Dancing" video that started it all.

Exuberant and utterly honest, I Do It with the Lights On is the inspiring story of how Whitney finally discovered her fabulousness when she stepped off the scale and into her life, embracing herself unconditionally - body, heart, and soul.

“Whitney’s story is one of radical vulnerability. She is a vibrant example of what it means to choose confidence when insecurity beckons from every corner. She is cool, funny, and shameless - in the best possible way." (Kelsey Miller, author of Big Girl: How I Gave Up Dieting & Got a Life)
“Soaring above expectations, I Do It with the Lights On delves into the complicated relationship between a woman and her body. With her trademark charisma, Whitney emerges triumphant, plucking from the mire some of the most important realizations one can hope to have. If you have a body, this memoir is a must-read." (Linda Bacon, PhD)

You don't have to be fat to love this message!

Great story and well preformed. Whitney is a very intelligent woman. I found myself smiling many times, and even got teary eyes once or twice. I've recommended this book to many women in my life already. Hell, men should read it too!

Wise words from a brave woman

I love books read by the author. And I found her story typical of so many of us. Kudos, Whitney, for learning to accept yourself. Many people of various sizes could benefit from your insight.

omg everybody needs to listen to this

I can't even handle how great this is. She says things I've been wanting to say but didn't have the words. It's important for people to know the impact their words and actions have.

This should be mandatory reading for everyone in America- regardless of weight or degree of self confidence. As a fat person new to body positivity and trying to encourage it in my friends and family, I found a lot in this book that resonated with me. While Whitney has had considerable privilege in her life, she acknowledges it and owns it. Her understanding of that makes her that much more endearing. If you're not a fat person, you have certainly seen fat people, and probably know fat people. This book should be read by you too. The harmful attitudes that our culture (and others!) has surrounding weight are important for everyone to understand and resist. I laughed at parts of this book and I cried, especially at difficult parts towards the beginning and at the very end. The book is read by the author, not a professional narrator, but give her a chance. I was used to her voice after a couple of minutes and she doesn't try to do any type of jarring "voice acting". It's like having a long, but one-sided conversation with a dear friend.

I have never seen her television show, so this review was my first real exposure to Whitney. I'm so glad her voice is out there and I'm looking forward to future books!

Whitney is a joy to listen to, with her Greensboro background not far from my own (my grandmama lives in Black Mountain!) and her constant sense of humor. Listening to her story is hard at times, making your heart ache with sympathy pains, but she makes it feel like girl's night, laughing at all the right places and righteous fury at others.
Girl, thank you. Thank you for understanding and for being a champion of body positivity in all the right ways and for DANCING.

What a refreshing new view on being accepting of self and others no matter what size we are. We are all of value no matter what kind of label society slaps on us. None it it matters... what does matter is how we love on and value ourselves. And I'll be darned...I realized through listening to this book that I am in fact, a feminist! Who knew?!

So many relatable experiences

I loved this audio book. It was very funny and honest and I couldn't wait to listen everyday on my way to work!. I had never really heard Whitney before, I knew she had a show and I followed her on instagram. After listening to this book I have a lot of respect and admiration for her for sharing some very painful experiences. I have struggled with my weight my entire life, lost 100lbs, gained it all back. It was nice to hear someone that understands what that is like. I went through many of the. same things. I especially appreciated the feminist chapter.! (power to the purse)Whitney, thank you for being the voice of so many women who are hurting everyday with their body image. I can't wait for your next book!

The mediocre sound engineering of this audio book made it practically unlistenable. I like the story, I thought it was really great, but it was very very hard to listen to. The sound goes in and out constantly.

Truly inspiring! I can definitely identify with Whitney in every aspect of this book. Thank you for helping me see that I need to show myself more self love! ❤

Love Whitney and the message she is putting out there! A great read for anybody who has let other people's perceptions affect their life negatively in any way. I really liked that Whitney narrated the story herself, rather than a professional narrator. I am thankful for her raw honesty and unapologetic live for herself. I am so glad that I decided to listen to this one...am sure I will listen to it again!