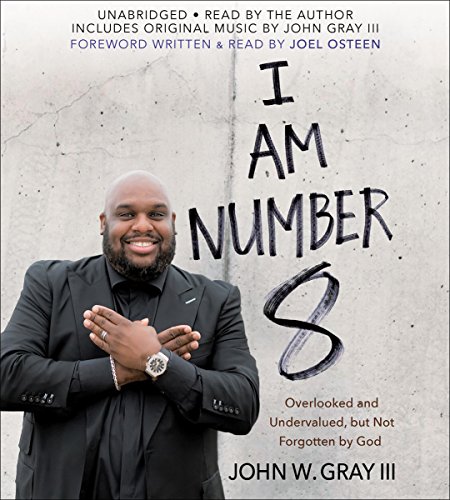 If God can take David - the invisible eighth son of a forgotten family - and turn him into a king, just imagine what magnificent plans He has for redeeming your life.

David was born a number eight - a hidden gem, often overlooked and undervalued by everyone except for God. For David, being a number eight seemed like a curse until the day God transformed him from the unknown eighth son of Jesse into the much-honored king of Israel.

When God sends out an invitation to greatness, His directions don't always make sense to us. You may feel like the most invisible, broken number eight out there, but God sees your hidden value and is growing you for better things. David didn't know it, but his time as a simple shepherd with a dull future did not go unnoticed by God. In David's darkest moments, he was cultivating the kind of gifts, wisdom, and leadership he would need to become a king.

Even when you're an underdog in the eyes of the world, God is working behind the scenes to develop you into a king or queen.

Answers to many questions

This was such a profound book for me because it answered questions that I had resolved to just trust God with the answers. I have such a better understanding of how much my childhood was a blessing for me. Why I have this heart that I have, why I have had to travel this, sometimes, treacherous journey. The regrets are much less; in fact, my entire perspective changed: 8 is great!

Amazing read! I couldn't put it down.

John Gray's practical approach to life's lessons was illuminating, and encouraging. I enjoyed this book in its entirety.

This book is AMAZING! I always knew I was an 8!

I have always believed and trusted in God- but often wondered why I was more happy secluded , alone and why I felt greatness coming but it wasn't my time yet. Now it has a name, I have an identity, I am NUMBER 8!

The book was fun, touching, held wonderment and insight, I think I knew deep somewhere, but am so happy it was put into words.

Outstanding and me to the "T"

I dont even know where to start. Basically the content, and pretty much the whole entire concept of John's book, related to me without missing a beat. I loved the delivery of; the comedy, the history, the biblical analogies (mainly relating to David), the intermost personal secrets that were divulged, and many other things that really made this one outstanding read (or listen in this case). In short, for someone like me, listening to this book was one true analgesic to my life's pains and uncertainties. Thank you for this, Sir John Gray. You have really turned on some lights in this Number 8's mind. May God continue to bless you, profusely! I will, and already have, continue to recommend this book to many.

I am so glad that Pastor John Gray read his book. Awesome book to read.

I will definitely listen to this book again! I haven't experienced a book this touching and practical in a long time. Will be buying the hard copy too for recording the questions at the end.

Love the message from the author and feel his passion through his words. Highly recommend.

I was very pleased with the flow and content. Fir a young man who is walking into the ministry with both eyes open and heart ready to learn, the insight was impeccable!!! I will share with many and pray it will bless there journey as well.

What an inspirational book I am to a number 8 who was so lost until I read this book. I love you and Avatar with my whole heart

This book was awesome start to finish. It was so relatable and has given me new perspective for my life and dealings with people ~ THE PEOPLE OF GOD!!!! THANK YOU!!

This book will change your life

I finished this book in 2 days, the stories are incredible, it will touch your life and you will be changed by it. Highly recomendable!