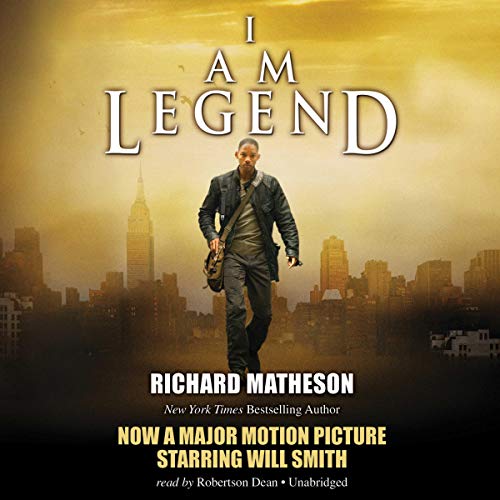 In I Am Legend, a plague has decimated the world, and those unfortunate enough to survive are transformed into blood-thirsty creatures of the night. Robert Neville is the last living man on earth. Every other man, woman, and child has become a vampire, and they are all hungry for Neville's blood. By day, he is the hunter, stalking the sleeping undead through the abandoned ruins of civilization. By night, he barricades himself in his home and prays for the dawn. How long can one man survive in a world of vampires?
©1954, 1982 by Richard Matheson (P)2007 Blackstone Audio Inc.
Horreur Science-fiction Paranormal
Afficher plus Afficher moins

"One of the ten all-time best novels of vampirism." ( Fangoria)
"The most clever and riveting vampire novel since Dracula." (Dean Koontz)
"I think the author who influenced me most as a writer was Richard Matheson. Books like I Am Legend were an inspiration to me." (Stephen King)

A great story about the last man alive. You can feel the loneliness of the character. Moments in this book will make you cry while others will scare you to death.
Highly recommend

Richard Matheson is Ahead of his Time

HEADER: It seems that when I like a book, I get "helpful" votes and when I don't like a book, I get "not helpful" votes. I don't understand this and I never will, but just know that I'm not going to like every book you're going to like. Also, if you happen to love the book and I dislike it, that doesn't mean my review didn't help you. Did it not give you an alternate perspective? Thanks---J. Veals

The story follows Richard Neville who barricades himself in his house each night when the blood-thirst, plagued group around his house, taunting Richard to let his guard down. During the day, he makes his way to infecteds' lairs and kills them in order to lower the population of the sick.

I'm not going to compare the movie to the book, but I am going to say that the title of the book and movie makes A LOT more sense in the novel. When I was watching the film, the 'I Am Legend' thing just was like an... "eh..." thing for me, but when I heard the last bit of the book, it was like "OHHHHH!!!!" Mr. Matheson is seriously one of my favorite sci-fi/horror authors of the time and currently, because his novels can stand up with today's scary books in so many ways. 'Hell House' is the other book by Mr. Matheson that makes me think of him as one of the GREATS!

So, I give the book a B+ in my grading scale and Robertson Dean, the narrator, was pretty good so I'll give him a solid B. It's definitely NOT THE MOVIE! So, even if you've watched 'I am Legend' with Will Smith, I'd suggest you listen or read this book. You can totally see how different the two really are!

Like a lot of reviewers, I saw the movie before I ever heard of the book. In fact, I decided to read the book because I was hoping for some clarification about some concepts and ideas that the movie hinted at but didn't explain.

Rather than reading it, I bought it on Audible and let somebody else read it to me. From the start I knew this book was not going to be the movie. Neville was definitely not the same man in the book that Will Smith portrayed in the movie. A lot of the questions raised by the movie were not answered, though many others were.

I liked that Neville wasn't some super-hero action star in the book. He was a normal guy just trying to survive in a world that didn't want or need him anymore. He was intelligent and given to learning, but he was also very dark, depressed and lonely. I pictured a Steve Buscemi in the book far more than a Will Smith.

One more thing, when I saw the movie I thought "wow, the infected people are kind of vampiric", but they never used the word vampire, rather calling them "dark-seekers". The book was very prolific in the use of the word vampire, and I loved the history of vampirism as explained in the book much much more than the reasons given (well, sort of given) in the movie.

Summary: Great fiction, great character development. Sometimes melodramatic narration (to be expected in an audio-only reading). Got a little long-winded and obscure during some of the exposition around the disease, and yet still intriguing to the curious mind. Over all, I enjoyed it and would recommend it to anybody who can handle the darkness of a post-apocalyptic world where the protagonist is not an action-hero superstar!

Does this classic from 1954 still hold up?

I am Legend was published way back in 1954 and it has been brought to film twice, both times starring big name actors. The first time was in the 1971 film, The Omega Man, starring Charlton Heston, and then again in 2007 with the film, I am Legend, starring Will Smith. That is quite an interesting pedigree, but does the original story from over 60 years ago still hold up? It's is a horror story about the last man on Earth struggling to survive in an apocalyptic world set in the late 1970s. A plague has wiped out most people, except for Robert Neville, and the crazed infected lunatics that rule the streets after the sun goes down. Neville must take full advantage of the daylight to make sure he accomplishes all required survival tasks in order for him to get through the night. Day by day this is a never ending struggle for survival and Robert is no longer sure he can continue to win it...

If you have seen the 2007 movie of the same name then you should know that this book shares little in common with that film, so that means you can still experience this book without the plot being spoiled. Although it was written more than half a century ago I would say that it has held up pretty well and it is clear to see how this book inspired many other authors to write their own apocalyptic tales. Is it the best end of the world story ever written? Far from it, but it is still worth experiencing just for the influence it has had on the genre that it helped create. Robertson Dean does the narration and just like the story, his performance is adequate, but not great.

ROBERT NEVILLE, THE LAST OF THE OLD RACE

THE HABIT OF LIVING
Written in 1954, this book stands the test of time. Course if written today, the vampires would be Zombies. At least two movies have been made of this, but neither followed the book totally. The movies are good and the book is good. While this is a Horror, it is also Science Fiction. The book is entertaining and thought provoking. I highly recommend it. The narrator is excellent.

Richard Matherson's I Am Legend is a classic from the 1950's that reads almost as well today as it did when originally released. Only one man appears to have survived a plague that turns humans into vampire-like creatures, only coming out at night, seeking him out. Without any superhuman abilities, he manages to organize himself for survival as well as some rudimentary investigation into the cause.

Perhaps the most interesting aspect of the sci-fi elements is that in the 1950's, the widespread introduction of antibiotics into medical practice hinted at the possibility of conquering all bacterial infections. And so Materson postulated a bacterial infection that was incurable with a spore phase for efficient spread. His suggestion of Darwinian evolution driving humanity's extinction, only to be replaced by something else is somewhat unique for the time. Although contemporary writings would insert zombies instead of vampires, the various scientific explanations for vampiric behaviors is noteworthy.

The narration is quite well done and expertly shifts in sync with the nearly bipolar attitude displayed throughout. Pacing is on target, making for a quick listen.

This is really a fantastic book. None of the movies based on it really do it justice. This is a very intimate telling of one man's experience with the end of civilization as he knows it. Movie adaptations always have to add more action or add new elements. What makes this novel so remarkable and memorable, however, is just how intimate the story telling is and how much I find myself caring about Robert Neville's character.

It's particularly remarkable to me how well this story holds up considering it was written in 1954. It is written in such a way as to have very, very few aspects that date the story. It is just as easy to visualize the story as happening today as I believe it would have been 50 or 60 years ago.

It is, in my opinion, a very intelligent and smartly written book and I'd recommend it wholeheartedly. The narrator is a perfect match for the material as well! I'd give it more stars if I could!

"Did not age well, very much a product of its time"

Narrator was great, though the book is definitely discriminatory and sexist; it is VERY cringey.

Cliche' I know but its just an COMPLETELY DIFFERENT story all together so wen i say, "the book was better" Im referring to the actual story(plot, characters, ending etc) being a better one. Recommendation affirmative!

A classic, but dated.

For quite a while while listening to this book, I was taken in by the caliber of story, particularly considering the fact that it was written in 1954. Not that there weren't plenty of wonderful books written in the 1950s, of course, but in the horror genre, books tended to be somewhat more lurid and less literary.

Creative storytelling notwithstanding, in the latter 2/3 of rhis book the overt misogyny of the era made a bold appearance. As soon as the main character meets a woman, the internal narrative of the male character becomes a laundry list of misogynistic attitudes about women in general and the female character specifically. This included the offhand observation that under other circumstances he probably would have raped her, because, you know...MAN NEEDS.

The taint of sexism made me sad, because I'd enjoyed the story up until that point. I don't expect a 1950s book to be written with the sensibilities of the 21st century, but it sure took the shine off an otherwise great yarn.

Have to say, too, that the narrator was oftentimes over-the-top. He has a great voice, but there was so much that he chose to narrate as rage-filled shouting, and his attempt at a adult female voice was cartoonish , distracting, and laughable.

This isn't the story portrayed in the Will Smith movie. Reader beware.

Better than I expected, but dated.

Very different and much better than the movie, in that there are actual ideas and philosophical thinking in this story of a plague survivor in a world of vampires. Also, now the title makes sense - something that wasn't really clear in the movie. Actually, even though it's quite dated, especially with gender roles and expectations, it makes a lot more sense and is more interesting.