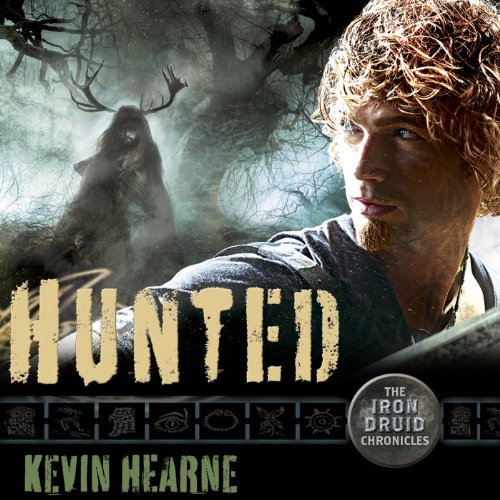 For a 2,000-year-old Druid, Atticus O’Sullivan is a pretty fast runner. Good thing, because he’s being chased by not one but two goddesses of the hunt - Artemis and Diana - for messing with one of their own. Dodging their slings and arrows, Atticus, Granuaile, and his wolfhound Oberon are making a mad dash across modern-day Europe to seek help from a friend of the Tuatha Dé Danann. His usual magical option of shifting planes is blocked, so instead of playing hide-and-seek, the game plan is...run like hell.

Crashing the pantheon marathon is the Norse god Loki. Killing Atticus is the only loose end he needs to tie up before unleashing Ragnarok - AKA the Apocalypse. Atticus and Granuaile have to outfox the Olympians and contain the god of mischief if they want to go on living - and still have a world to live in.

"An exciting mix of comedy, action, and mythology... [Atticus] is one of the best main characters currently present in the urban fantasy genre." ( Fantasy Book Critic, on Tricked)
"Superb...eminently readable...plenty of quips and zap-pow-bang fighting." ( Publishers Weekly, on Hounded)

What do you need to survive two thousand years being chased by an assortment of gods from across the mythological spectrum; humor.
In “Hunted,’ the Iron Druid chronicles, book six, Atticus and his merry band are on the run across Europe being chased by Artemis and Diana, the Greek and Roman goddesses of the hunt. Loki, one of the Norse gods is still after him ready to begin Ragnarok, and to make his life even more interesting vampires and a group of dark elves are also trying to eliminate the Iron Druid.
With a surprisingly insightful and humorous canine philosophy delivered by Atticus’s Irish wolfhound, Oberon, my favorite character in the series, Kevin Hearne writes some of his best lines.
Luke Daniel, the narrator, does another great job and his rendition of the wise cracking canine cracks me up.

Not my favorite but still fun!

Audio Rating: 5.00 (not part of the overall rating)

First Thought when Finished: The end of Hunted was a little to abrupt and it felt like nothing really happened in the story. I still love the characters but this book in the series left me wanting.

Story Thoughts: Let me start with this, even though I did not enjoy Hunted as much as the rest of the series there was still the Kevin Hearne writing that we all know and love. I can't pinpoint exactly where the book and I didn't connect. I wasn't a fan of having things told from Granuaile's POV but only because she didn't sound like her old quippy self. I like her as a character but her POV parts just felt odd. I did like her in the story when it was from Atticus or Oberon though. Also, it felt like there was a lot of action but not a lot going on in Hunted. Yes, there were allies made and bad guys defeated (sort of) but it felt like one big peace treaty negotiation. Nothing wrong with that but Hunted felt more like filler (every series always has that one book that feels that way, this was this series book). Would I read it again? As part of a series reread absolutely. Do I think it would have worked better for me if I could read the next book? Probably.

Character Thoughts: I love Kevin Hearne's characters. They are the reason I love this series. Atticus, Oberon, and Granuaile are supported by some great characters from Mythology/Folklore/Kevin's Imagination. There were a few sad moments in Hunted and now there are some characters that will no longer be with us. I will miss them but my favorites are still around. You can't go wrong with The Iron Druid characters. They just rock!


Luke Daniels is awesome! Seriously I could listen to him read the telephone book. However, he excels at Atticus and Oberon. He is the characters in the Iron Druid series. I couldn't imagine anyone but him reading them. If you haven't listened to Luke Daniels read/act/bring to life The Iron Druid Chronicles then you are missing out. I highly recommend him.

Final Thoughts: Even though this wasn't my favorite, Hunted still had its fun moments. Don't miss out on the brilliance that is Oberon and Atticus. They do have their moments!

What made the experience of listening to Hunted the most enjoyable?

The story is enagaging and Luke Daniels does a great job with the narration.

Oberon is my favorite character. HE is the character that really makes the books interesting. His humor and doggy outlook are one of the best parts of the series. Luke Daniels portray makes it even better capturing the humor and nuances perfectly.

Everything. Each character is distinct and memorable. He catptures both the humor as well as emotional content very well.

Yes, but fortunately it was long enough I couldn't.

let's just say that this book came out on the same day as COld Days by Jim Butcher and I listened to this one FIRST.

Almost dropped this to a 3 star. Good ending and a few good parts between, but this book seemed like a link between two stories more than anything else. Like he took a couple chapters and stretched them into a whole book. The ending was a very nice setup for things to come, but you could read the beginning and the last couple chapters and not miss much. Still love Oberon.

"Duck, Damn that arrow was close"

If you could sum up Hunted in three words, what would they be?

What other book might you compare Hunted to and why?

Comparing Hunted to other books is hard because I feel Hearne has made such stand alone book series with characters who you rout for and want the outcome to be a happy ending even when you can't see how its going to happen. If I had to compare Hunted and the Iron Druid Chronicles than I would have to say Jim Butcher and the Dresden Files would be a close comparison. The main characters are magic users and really truly wanted to help even though they struggle with their own perceptions and shortcomings but that really makes them enjoyable stories and series.

Actually, it’s kind of funny but the last scene in the book was getting Oberon an Irish Wolf Hound bitch and his reaction and the whole scenario had me spitting my milk across the table. In fact, due to that reaction my oldest child is currently listening to Hounded, which is an endorsement all by itself.

***SPOILER ALERT***
The death of Atticus was a tough scene to listen and experience. Even though we learn that his soul catching charm in which he hadn't test (for obvious reasons-He would've had to die) before works as he thought it would. Maybe he should make another and while he is at it make one for "Clever Girl" and Oberon too. But the whole period of not knowing what was happen was a little much I would say. Made a little harder to detect the outcome because in this book we get "Clever Girl" narrating which is new to me, I didn't read/listen to Hearne's novellas so I don't know if she had in previous books.

If you enjoy any magic, fantasy, or just plain funny adventure books then you will enjoy the Iron Druid Chronicles to include Hunted

Not the best in the series

I enjoyed the book well enough, but mostly because I have enjoyed the series and characters. Oberon was a fun comedic relief tool in many of the earlier books. In the last two books Oberon has taken a main character role and is constantly interjecting. I don't need a reminder that dogs like sausage, bacon, and bitches every few minutes for an entire book's worth of content. The books are enjoyable because Atticus is so witty and fun himself, there isn't a need for a constant comedic relief, especially if it is the same tired joke that got a few snickers. This book was light on the drama and lore that made the first few books in the series so engaging and fun.

This chapter in the Iron Druid Chronicles seemed a little like a check the box chapter. I don't know that I will continue with the series if there is another book in this vein that goes away from the fun and vibrant characters that are the gods and the engaging recipe that was used in the first few books. If I want to listen to a story that is one third dedicated to the simple mindedness of dogs I would avoid a series that purports to be about gods among us and search out something that is about dogs.

The performance was excellent. Luke Daniels has a good voice spot on emotion and makes the book easy to listen to.

A series that keeps it's steam

Some series start off strong, then get weaker - not this one. Kevin Hearne's Iron Druid continues to bring great enjoyment. The story remains fresh and entertaining. I cannot wait for the next installment.

I agree with the readers that give this installment 5 stars. Luke Daniels narration is just perfect! Oh, there are a few things I could complain about, but they are so small as to be insignificant. I would recommend this to anyone who enjoyed the other installments in this series. If you haven't read those yet, start there.

sadly this book ended the joy for me

I hate the silliness level of the dog. I get it but its just to much to keep reading. perhaps I'll come back but now with 2 dogs I can only imagine how bad it gets. this was just way to silly compared to others on the series

slowest of the series.

Some actions in the story turned me off and it was a struggle to get through. it's a great continuation of the series, but i wasn't ad invested in the story when Atticus wasn't on screen. Some exposition seemed to drag where the pace should have been quick—it really sucked the excitement out of the scene.

I'll continue reading. This one should have gone through a more objective editor's hands.

Sorry to be negative, but this book has taken the series into a speeding nose dive. The plot has slowed way down, the characters have become 2-dimensional and the attempts at humor are too contrived to be funny. The longer i listened, the less I began to care about any of the pro or antagonists. I can't even stand Oberon anymore (I'm a total dog person, so it took a lot for me to dislike him), but he has regrettably morphed into SCRAPPY DOO! I don't know about anyone else, but that bozo ruined my favorite cartoon & should have been put down! As for Atticus, the best parallel I can draw is with Bob Sagat (back in the day, he hosted America's funniest home videos & was in a forgettable sitcon). if you agree that he's a dork with LAME humor & a really annoying voice, then this book is not for you. This series has degenerated to a YOUNG YA with little appeal to anyone older than 12. Unfortunately I won't be continuing the series & will return this book.