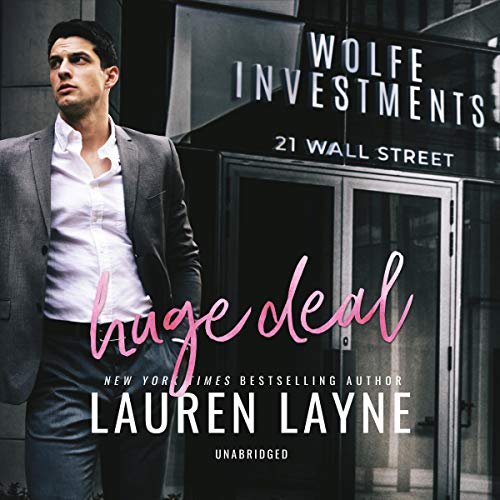 Even for a top-gun banker, temptation this hot is quite a gamble in a sexy Wall Street romp from New York Times best-selling author Lauren Layne.

An alpha among the wolves of Wall Street, Kennedy Dawson rose to the top of the pack by striking the right contracts at the right times. But there's one deal that's been giving him a run for his money - a pact to never again let his assistant, Kate, get under his skin. She may be smart, gorgeous, and sharp as a whip, but she's definitely off-limits.

Kate Henley isn't a banker, but she knows a thing or two about risk management - specifically, about managing her attraction to her smolderingly sexy boss. She already fell once, and Kennedy showed no sign of paying a return on her investment. So when Kennedy's brother starts pursuing her, Kate figures she has the best of both worlds. Jack is charming, rich, very attentive, and the spitting image of his older brother.

It's also making Kennedy think twice. But to win Kate's heart, he'll have to broker the deal of a lifetime...and prove he's worth the risk.

I've been stalking this series for the final book for months, waiting to hear Kennedy and kate's story. The only disappointment was it being in 3rd person. Why do authors still do this ? lol. Only reason why I kept the book is because of the awesome performance Zachary Webber gives and I actually liked the story.

I was waiting for Kennedy and Kate’s story. Sadly, I didn’t care for it. I’m not sure why the author decided that this book should be in 3rd person. I couldn’t get into it at all.
Samantha Cook and Zachary Webber are amazing but not even their beautiful voices could help the fact that this hook was in 3rd person.

After the first two books in the series were written in first person, the third one was written in third person which I did not appreciate. Besides that, the story was very sweet and I liked it.

Zachary Webber shines...as always. I’ve been waiting a long time to read Kat’s and Kennedy’s story. I enjoyed it very much.

This was a very sweet story. It had just the right amount of romance and great sex. I could listen to it again and I never do that.

Not as good as the other two. Female(Kate) is immature ... Wasn’t as believable and female went from love struck to b$&@“.

Ok. Was this written by two different people? Because I got whiplash from part 1 to part 2. Part 2 was terrible. The way Kate turned out was not great. I’m also not a fan of super strong whiny angst in romance. Also the end was just anticlimactic. Sigh.

Enjoyed this story very much.
All books in this series were very good. I definitely recommend them.
Enjoy!

First off, I knew going in that this book, for some inexplicable reason, was in third person unlike the first two. Not my favorite thing but I really wanted Kennedy and Kate’s story. Things were going pretty well in the beginning. I liked getting more of Kennedy and Kate’s dynamic one on one. The friend group’s banter was as good as ever. Part two is where the train ran off the track. Kate got irrationally immature and a bit on the shrill b**** side. I know something heartbreaking happened but her reaction to it was over the top childish. I had to take a break with a little over an hour left because oh my god this character is like nails on a chalkboard towards the end. Hoping for a good redemption for her.

could have been so much better

I was excited for this sorry and felt so disappointed. Part 1 was great but Part 2 ruined the story for me. Kate became such a bitch, so immature and irrational. I had to force myself to finish this story and wish I hadn't because it was such a let down.