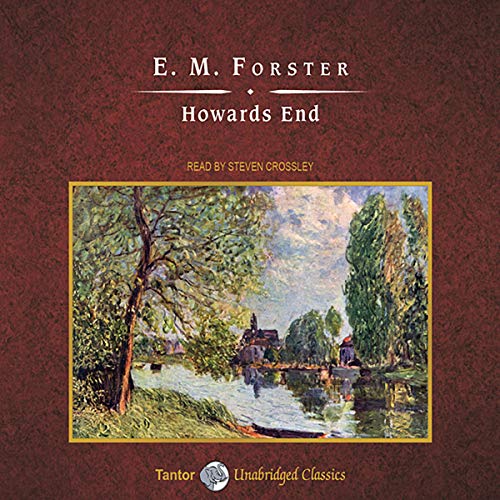 Considered by many to be E. M. Forster's greatest novel, Howards End is a beautifully subtle tale of two very different families brought together by an unusual event. The Schlegels are intellectuals, devotees of art and literature. The Wilcoxes are practical and materialistic, leading lives of "telegrams and anger". When the elder Mrs. Wilcox dies and her family discovers she has left their country home - Howards End - to one of the Schlegel sisters, a crisis between the two families is precipitated that takes years to resolve.

Written in 1910, Howards End is a symbolic exploration of the social, economic, and intellectual forces at work in England in the years preceding World War I, a time when vast social changes were occurring. In the Schlegels and the Wilcoxes, Forster perfectly embodies the competing idealism and materialism of the upper classes, while the conflict over the ownership of Howards End represents the struggle for possession of the country's future.

Forster refuses to take sides in this conflict. Instead he poses one of the book's central questions: In a changing modern society, what should be the relation between the inner and outer life, between the world of the intellect and the world of business? Can they ever, as Forster urges, "only connect"?

If you are a true fan of E M Forster or the Merchant Ivory dramatizations of his works, or the most recent Starz mini series, this book is for you. With great subtlety and the pace that pre-1930 novels enjoyed, Forster fleshes his characters' worlds artfully. This is one of those literary works that brings alive so perfectly the period in which it was written in a way that is relatable. The Schlegel family is the new artistic rather radically minded siblings that are at the heart of the story. The Wilcoxes represent the old guard with whom they have chance acquaintance.
Steven Crossley's distinguished performance perfectly relates all points of view with multiple intonations, dialects, and pacing essential to the setting. I listened carefully to samples of other readings and his was by far superior. Even with feminine main characters, his narration supplies full nuance.
Recommended.

Where does Howards End rank among all the audiobooks you’ve listened to so far?

The reader has a tendency to trail off at the end of a sentence. I had to raise the volume on many occasions to understand what he was saying. I thought maybe my earphones were going but I am listening to another book now and it is fine. It is a good novel. I recommend another recording. Audible has several.

Volume is too varied either too loud or too soft; disturbing to what would be otherwise a totally enjoyable audio book.

A Tough, But Stately "Read" With Bad Narrator

Unfortunately, my first Forster book on Audible was a struggle to finish.

Henry Wilcox was my favorite character full of characters that, in my opinion, were not fleshed out enough in personality or given much to do. Henry at least had some nice words.

My favorite part was when Henry proposed to Margaret/Meg. Nicely paced with perfect pitch.

I think as nice as Crossley's voice sounds, his bad performance sunk this book for me. A book written by men with females as the main protagonists requires a male narrator who is excellent in creating different female voices. Crossley is worst than any narrator I have yet to hear on audible. All the female voices sound the same. With so many back and forth conversations between Margaret and Ellen without personal identification of who is speaking, the narrator needs to make voices distinctive since I dont have the book in front of me to know which character is speaking. Consequently, things got confusing thus making this talk-driven story hard to follow thus trying my patience and interest.

I would highly recommend another version of this classic book. I am getting my money back for this one.

I honestly don’t understand how this is considered a classic. The story is fairly unimaginative and none of the characters, save Helen, are not very likable. I read it back to back with Brideshead Revisted and found the latter far more engaging. This was not a favorite.

#StevenCrossley's reading of #EMFoster's incomparable words was a revelation, a true performance, bringing every character to life, like listening to a great play. A totally life-changing work of literature, whose admonition to #OnlyConnect can serve us all as the prescription for achieving #happiness.

The narrator’s voice would constantly shift between very loud and very soft, requiring me to turn my volume WAY up to be able to hear the quiet parts, thus hurting my ears during the loud parts. This should be part of book reading 101: relatively even volume. Made for a terrible listening experience.

I am sure I will be listening to it again!

Have seen two film versions and finally listened to it! It is now one of my favorite novels. I understand so much more than when exposed to the Emma Thompson Anthony Hopkins film version when I was young. Brilliant writer and lively narrator. Also, the newest mini series film version lovely to as the mini series format allows for these compression of the story.

After seeing THE INHERITANCE

With Margaret, Forster created a character more interesting than Eric (see below). Only knew this from the film; was compelled to read after seeing recent Broadway gay plays THE INHERITANCE which loosely retells this story in modern day NYC. Book was better. 😜

I read A Passage to India oh, so many years ago. I don’t remember much other than I enjoyed it a lot. I recently saw the mini-series Howards End and was intrigued enough to get this audiobook. The writing is beautiful, and the story overall lovely with excellent character development. I do have a big quibble with Margaret’s relationship with Henry, how she, such an independent woman could choose to subjugate herself that way, but in some ways sh didn’t. I suppose one can find excuses for her, but she did have enough of an income (not from hard work, mind you) that she didn’t have to marry. But I let the story take over (I knew it from the mini-series, which was quite true to the book, for a TV production), and enjoyed it a lot, and the narration was masterly. Excellent voices, women’s voices, too, were done well. Here and there, his voice dropped off too much at the end of a sentence, but that is a really minor point. The story also has some rather modern ideas, considering that it was written over 100 years ago. Margaret does an excellent job of pointing out the double-standards for men and women that exist still.