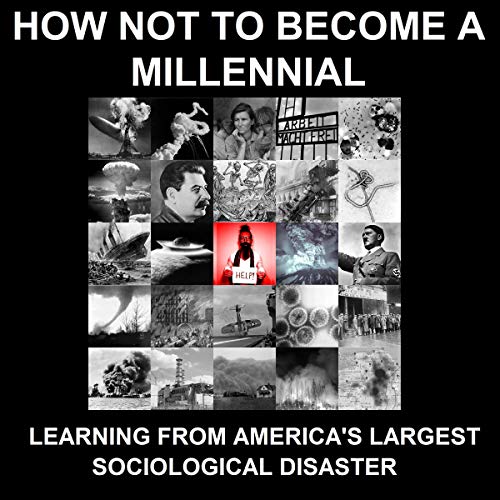 How Not to Become a Millennial: Learning from America's Largest Sociological Disaster

Never before in the history of the world has more time, effort, and resources been invested into a single generation than the Millennials. Be it incredibly expensive college degrees, perfectly privileged diets, life-coping drugs, uncountable therapist visits, even bending reality so everybody was impossibly a winner, no expense was spared for the most pampered generation in human history.

But $30 trillion and 20 years later we have the biggest failure of a human crop in the history of the world. The Millennials are hopelessly indebted, perennially underemployed, they suffer more mental illness than any generation before them, and they are hopelessly armed with completely worthless degrees. They have absolutely no hope of homeownership, retirement, or family, and most will live their entire lives financially crippled with debt. They are an unmitigated sociological disaster and a tragic chapter in human history.

But it doesn't have to be this way and it doesn't have to end this way for Millennials. Because everybody can learn from the pain, suffering, and failure of the Millennials. The secret to success, wealth, happiness, and love is laying right in front of us as within every mistake they made there is the knowledge and wisdom that leads to success. We just need the courage to think critically, be honest with ourselves, and admit where we as a society have failed. If we have this come-to-jesus-meeting with ourselves, we can spare future generations the fate of the Millennials and give the Millennials themselves a fighting chance to salvage what remains of their lives. We owe it to future generations and it’s the least we can do for America’s most-tortured generation - The Millennials.

When I first saw the listing for this book I thought, "Oh, another cheesy book mocking we pathetic little millennials while aggrandizing the Boomers," but while this book didn't pull any punches at all, the author takes critical aim straight at the Boomers very fairly.
Life is frustrating and I relate to much of what the author describes, but I have to also suffer the mockery and cheesy insults from Boomers, while dealing with stress. Yet, nobody takes a critical look at the Boomers except for the Marxist propaganda that takes aim at how they failed to be Marxists (in essence). Finally, something that doesn't worship the Boomers, but points out how they failed due to their terrible moral weaknesses.
The book also steps over the landmine of worshipping Gen X and Gen Z. It applies logic based on history rather than saying, "Gen Z," will save us.
The biggest fault however was the book didn't go nearly as far as it should. Much of what we see, we've seen before. The author didn't do his homework and properly associate some historical events to what we see now. Things like this have happened before, for example in France, before the French Revolution, people entertained themselves with boutique religions, which were based on Gnostic thinking. That is, I think the author has a critical problem, he is an atheist so he would naturally fail to understand the spiritual problem. He doesn't understand Christian influence, Gnostic influence, and platonic influence. In fact, much of what he talks about is in fact platonic thinking. For example, while he properly identifies the Marxist underpinnings of the terrible experiment we suffered, Marxism is Gnostic thinking, and serves to satisfy much of the human need for spirituality, while also serving the evilness of that person. When he describes what woman want, he's using platonic thinking. While he points out that women really don't want the men the Boomers told women they want, and told us men what women want, he was actually really fair in both sides, but missed the problem of being too feminine and too masculine, because we men and women need to learn from each other's natural tendencies. Men need to learn nurturing, gentleness, and joy, but women need to learn discipline, determination, how to take one on the chin, and and stoicism from men.
Another weakness is that the author uses a lot of reason not based on actual evidence, but based on anecdotes and surmising. It's not enough to falsify what he says, because he could just be getting it right, but we'll have to be careful with the information because it looks like it fits our anecdotes as well. Sometimes he uses anecdotes well, when he describes miserable people, however.
The author is strong where he goes into detail about interpersonal needs, that when satisfied, enrich out lives. He points out the failures of materialism and living for oneself, and boldly talks about our inescapable need for each other, especially a spouse. This is in stark contrast to it naval gazing parents and self esteem programs. I've never really heard anybody talk about sharing wonderful experiences with people in such a way. Rather, it's quite impressive. Full points for other centered love.
Again, the author is an atheist and he falls again because of it because he fails to see the spiritual needs that also enhance our lives. He falls to point out important virtues like finding joy in oppression. Also, living for something higher than oneself is important when discovered (that is too say, you need to authentically determine that there really is something higher worth dying for.) Finally, he misses how atheism is a problem, because the idea of death is so terrible the human conscience cannot bare it. This chases people to Kantian thinking, where they struggle to escape the doom. They turn to Gnostic thinking which promises just that, so in turn, this authors thinking while pretty good, will not properly heal the problem, but rather create a new one in it's place. Historically, this is how humans deal with their problems, by changing them out for another, because, as the author rightly points out so many times, humans are lazy and will do anything to escape solving a problem. Again, another strong observation which must be faced by us all, this means we put many times more effort than necessary to fail at a problem, than would take to fix, and finally, we always get the opposite of what we want for this reason. Many sobering truths in detail there.

Facts that all young people need to hear

As a 23 yeard old gen Z male, these kinds of books are worth their weight in Gold. Graduated with a Busines degree but I may be going into the trades or even nursing instead. Wish I had this info at 18!

As a millennial I have to disagree..

This is just a broad brushstroke of all millennials, If you consider reading this after you’re done remember to live your life. Regardless of you generation.

If you had no dad, read this book.

It’s the bare bones truth of the world and what your father should have taught you. This book is worth the investment.

This Book tells you how it is.

Straight to the point. You may cry after reading this because they didn't tell you this when you were a kid. Read it or Audible it!

Although I don't agree with everything he say's he gives great financial and practical advice. I've read every single one of his book's and this might be one of the best books Clarey's ever written. I couldn't put it down and loved most of the points and arguments he made. I would highly suggest purchasing this book for anyone post millennial.

I’m a Millennial and I always new there was something wrong with the way I was brought up and how others were, somewhat, the same. This book has opened my eyes. This sad, ugly and real truth has gotten me feel understood and hopeful in my future as I have learned something profound.

A Guide on how to not waste your life

You've been lied to. This book will tell you how and what is the path to recover the time lost.

This is a bleak read, but it has ZERO LIES. If you're struggling or someone you care about is struggling, chances are they will find answers in this book that will help them, so long as they can be honest with themselves.

A awesome book every person should read to get some thru right in your face and know what to do next is up to you.

I went into this with an open mind and an idea of the culture wars between left and right, young and old, urban vs rural. Acknowledging problems tend to exist with each generation due to different risks, debates, cultural trends and the current zeitgeists, I was hoping this would help reflect on the causes and potential solutions on many concerns that millennials have, are causing and are subject to. I hoped for some critical analysis and critiquing of this generation stemming from their own failings and missteps as well as those of other generations and other forces.
Instead I quickly realised that I was listening to a book about someone explaining to me just how ruinous and disastrous this generation is and how it is entirely the fault of the left wing political realm. There was no critique or really strong foundations laid, just a torrent of rabid political talking points without strong balance or even the illusion of it.
Solid critique requires some self-awareness and reflection that I'm not sure the author performed and as such this book didn't help me with my questions, only leaving the impression of more partisan hackery. I would urge potential readers to check out another different book that attempts to build a more reasonable thesis.

And if you still wish to read this kind of fan fiction, I would suggest a cable TV channel.