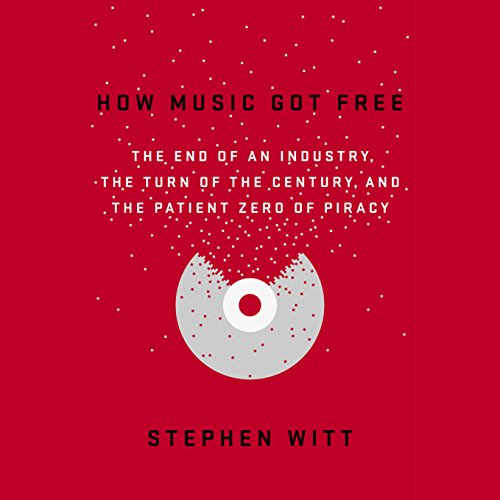 How Music Got Free

"What happens when an entire generation commits the same crime?"

How Music Got Free is a riveting story of obsession, music, crime, and money, featuring visionaries and criminals, moguls and tech-savvy teenagers. It's about the greatest pirate in history, the most powerful executive in the music business, a revolutionary invention, and an illegal website four times the size of the iTunes music store.

Journalist Stephen Witt traces the secret history of digital music piracy, from the German audio engineers who invented the mp3 to a North Carolina compact-disc manufacturing plant where factory worker Dell Glover leaked nearly 2,000 albums over the course of a decade to the high-rises of midtown Manhattan where music executive Doug Morris cornered the global market on rap and finally into the darkest recesses of the Internet.

Through these interwoven narratives, Witt has written a thrilling audiobook that depicts the moment in history when ordinary life became forever entwined with the world online - when suddenly all the music ever recorded was available for free. In the pause-resisting tradition of writers like Michael Lewis and Lawrence Wright, Witt's deeply reported first book introduces the unforgettable characters - inventors, executives, factory workers, and smugglers - who revolutionized an entire art form and reveals for the first time the secret underworld of media pirates that transformed our digital lives.

An irresistible, never-before-told story of greed, cunning, genius, and deceit, How Music Got Free isn't just a story of the music industry - it's a must-listen history of the Internet itself.

This story should be, will be, must be, made into a movie. So good! Bravo.

This is a gripping and engaging book about a subject that everyone is familiar with. No matter how much you know about mp3s and online music and piracy, you don't know anything until you read/listen to this well researched book.

Compelling Story about Technology and the Recording Industry

This book interleaves the technology, the business "machine," the intellectual property issues, and the illegal downloading so seamlessly that you don't want to stop listening. You'll come away understanding how digital compression works so well. From the first chapter you will want to find out more about the main actors; the story unfolds like a good detective novel. You'll learn about how the music industry has evolved over several decades. I liked the irony.

A history of the MP3 and Online Music

A well researched book that stays objective. I was worried this would be one of those books that only looks at the subject from one point of view, but Mr. Witt tells both sides here.

The book focuses on a few of the major players to tell the story. There's the cooperate side, the pirates, and then there's the men that created the means for one to devastate the other...the MP3.

The whole thing is told in plain enough speak for anyone to understand, no need to be a geek to follow along.

Read by the author, and he does OK narrating his own work.

It was OK. It wasn't nearly as revelatory as the author would have you believe. The winding narrative was tedious, but tolerable, but the narration was like listening to a college student trying to be hip on YouTube.

If you’ve listened to books by Stephen Witt before, how does this one compare?

Holy mackerel! There's no way on God's green earth it could be worse! Admittedly, I've never listened to this guy read before, but I would hate to think that this abysmal performance is an improvement over anything, and I shudder to think of how the lesser performance would sound!

Would you be willing to try another one of Stephen Witt’s performances?

Absolutely not. The guy is not a professional narrator and it shows. He swallows his words, his voice cracks, and he doesn't even sound comfortable reading his own material.

Did How Music Got Free inspire you to do anything?

Yes. It inspired me to cross anything read or written by Stephen Witt off my list.

I would really like my money back on this one. I quit halfway through because I couldn't bear the narrator.

Great Story Read By Its Author

A great read for anyone interested in music industry or technology. How Music Got Free is a marriage of the technology genre with the music history genre.

This is an excellent story with real life accounts of how one generation changed the way music was created shared and distributed legally and illegally. The real interesting part is the technology piece. It goes in depth into how we ended up with the current technology we use everyday on iTunes and Spotify.

Being a young person when all this was going on was exciting, and it is great to hear the deeper level account of what was happening below the public eye. The record industry story line was also interesting. The picture painted is clear, and the stories are real.

This book would have been more enjoyable to listen with a professional narrator.

The storyline of the music executive did not blend well with the overall story.

Ripping and burning the future of music

Very interesting book about the development of the MP3 (think VHS vs BETA) and its subsequent impact on the music industry, its enablement of Internet piracy and the music industry's ham-fisted and head in the sand strategies to preserve its corporate interests.

Recommended if you're interested in the story of how all those songs you've downloaded legally or illegally are squashed down into a few megabytes of binary code of ones and zeros and how a network of geeks in their bedrooms at one point amassed the worlds largest library of music and thus explains why a generation of our kids grew up believing free music (and everything else digital) was their birthright.

Outstanding story well told by the author. Will resonate with many former and current music pirates in tons of fun and interesting ways. Really enjoyed hearing the stories behind the invention of the MP3, the scene, RNS, OiNk's Pink Palace, VEVO and more. Great job!

after hearing a book about Napster and reading an article abaout the German Frauenhofer institute related to mp3 I was intrieged to get more information. I like the multiple sides which are highlighted by Stephen Will and for me it was interesting how the music industry was sleeping and not understanding what is going on. This was not organized crime, it was a subculture, which saw copyright as a done practice, but partly also earnig some pocket money with this. I am sure iTunes never would happen, if this subculture did not exist. Which subculture is disrupting other parts of our life and we sleep today?! A question which raised this book ...