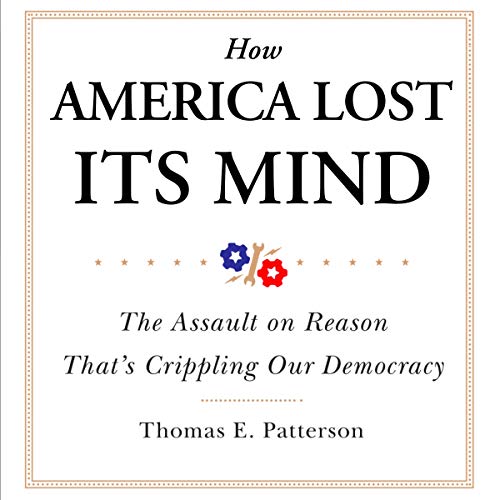 How America Lost Its Mind

Americans are losing touch with reality. On virtually every issue, from climate change to immigration, tens of millions of Americans have opinions and beliefs wildly at odds with fact, rendering them unable to think sensibly about politics. In How America Lost Its Mind, Thomas E. Patterson explains the rise of a world of “alternative facts” and the slow motion cultural and political calamity unfolding around us.

A call to action, his book encourages us to wrest institutional power from ideologues and disrupters and entrust it to sensible citizens and leaders to restore our commitment to mutual tolerance and restraint, to cleanse the internet of fake news and disinformation, and to demand a steady supply of trustworthy and relevant information from our news sources.

As philosopher Hannah Arendt wrote decades ago, the rise of demagogues is abetted by “people for whom the distinction between fact and fiction, true and false, no longer exists”. In How America Lost Its Mind, Thomas E. Patterson makes a passionate case for fully and fiercely engaging on the side of truth and mutual respect in our present arms race between fact and fake, unity and division, civility and incivility.

“A book...that needed to be written...the response of a reasoned, thinking person to a cultural and political calamity that he and many others saw unfolding in slow motion.” (Keith Gaddie, coauthor of The Rise and Fall of the Voting Rights Act)

It’s a Herculean task to provide an unbiased view of the current political culture in the United States. My personal bias leans left and while inexperienced some cognitive discomfort when Patterson gave examples of Democrats and progressives foibles, I imagine this book would be more uncomfortable for someone on the right to read. Still Patterson’s knowledgeable explanation of how we got here was very detailed, backed up with many examples, and relatively concise. While the conclusion was not bursting with hope and solutions, I ended up feeling less despair than I’d expected. We may climb out of this hole we’ve dug ourselves.

Peter Lerman’s reading was excellent. He has a rich professorial tone that lends itself to a lecture series style book. His pacing kept me from increasing the speed, a habit I’ve been employing lately with non-fiction.

There is no question that our democracy is on very shaky grounds right now as the author clearly explains. Your leaning, right or left, is irrelevant in understanding the great fear we should all have today for the future of our country.

Unfortunately the fat lady has not sung yet on the downward slide of our democracy I am afraid and what faint hope offered here is today just a faint hope. The more people that read or listen to this, the brighter that hope might become.

Peter Lerman does a great job putting the proper sense of importance to these words.

Political Power and the Influence of the Press

I found the book excellent. It was well argued, and for the most part fair in that, unlike many other books of its type, it's not looking to be "tribal". It is not a cover to cover cheering section for one or the other side, but rather seeks to be a cheering section for what America could be if it would be more aware of how the Press and politics have combined into a brew that undermines rather than builds our democracy.

That said, the book does tend to put its thumb on the scale for those who think the Obama Presidency was ideal, without properly assessing what it was about his presidency that brought about the backlash that brought President Trump forward. That doesn't mean there are no theories, rather, the ones put forward have the overall effect of suggesting that Obama and those who supported him had it right, and everyone else is either misperceiving what America should become, or need to be negotiated with so that they can be made a bit more comfortable and politically anesthetized while the America they want transitions into one that is, well, not really what they want.

So in not really taking on why conservatives want those things (other than saying they're being "nostalgic"), and why they fear the changes that are currently occurring in America, or even taking those fears seriously enough to imagine that they might be right more often than not, I don't think the author can really get to the bottom of why America has become a "crippled democracy" and this is where I think the book falters. He uses statistics, sometime misleadingly, as a proxy for properly describing what's going on. The numbers will only tell a small part of the story.

It's a thought-provoking and well crafted book, though, and it brings up some very good points. It was critical of both sides of the debate, but I felt some of his points were crafted to lead us to conclusions that were unwarranted and can have benefitted from further scrutiny. But I think the best message to take away is this - that if both sides want a better America, the time has come to start listening to each other. Really listening, not just trying to gainsay or engage in one-upmanship. There are reasons that America is undergoing a cultural upheaval, and there's just no way to put it to rest without each citizen, no matter what their political leaning, to engage with their neighbors rather than vicariously using politicians as our gladiators.

This book was obtained by me for no cost on the condition that I right my review.

A perfect length for an audiobook describing problems and possible solutions for the polarization and hyper-partisanship that characterizes the United States these days. There's plenty of blame to go around and it will take mindfulness and hard work for future leaders to mend the divisions. But there's also plenty of room for self-reflection at the individual level, too. I don't want to fill up space here by blathering on about my personal insights and examples, so let's just say that there's a lot in this book to think about.

My favourite topic in the book is about tribalism ('us versus them') and how destructive that can be. During election campaigns, sure, sink to that level of competition. But once the election is over, you've got to put that behind you and move forward collaboratively. If there are sore losers and sore winners, what you end up with is cycles of aggression, defensiveness, and retaliation. When I hear that a political party's sole objective is to make the President a 'one-term' President, regardless of the merits of the incumbent's policiies, it smacks of cutting off one's nose to spite one's face. (What kind of leadership example is that, to send to citizens of a country??)

My second favourite part of the book is the discussion of how factual news and op ed/punditry have blurred together. As a non-American, I didn't know the history and evolution of partisan broadcasting in the United States - it was very interesting to learn about that. I can appreciate that mainstream media is a business that caters to its target markets, but I can't imagine the government would reach the point where it imposes stricter objectivity restrictions on content. I suspect that thinks will get worse (e.g., someone will be egged on by a charismatic media personality and will commit a violent crime) before it gets better.

If I were to make one suggestion, I wish the author had spent more time speculating about the ultimate objectives of hyper-partisans. This book explains very well some of the causes and mechanisms that have enabled hyper-partisanship to thrive in today's political environment. But a piece that perplexes me is what the hyper-partisans hope to achieve. Do they want to eliminate the other party and be a one-party country? Because that sounds like a dictatorship and I don't think too many Americans would want that. Do hyper-partisans want to crush and demoralize their neighbours on the other side of the political fence, according them no dignity or respect? Or is it all just a game that unfortunately some people take a wee bit too seriously (with the hyper-partisans winking at us but some people aren't seeing the wink). I guess I'm wondering about the ultimate consequences of hyper-partisanship. I think the author would have some good insights and examples to share.

I enjoyed the narrator tremendously - there was, I felt, a good fit between the voice and the material. I'd recommend this book to others... but I suspect that the people who need to read it most wouldn't be much interested in reading it....

How America Lost its mind

I found this a very good,unbiased view of how we got to where we are today.It started before our current regime.Trump has only taken the bull by the horns and made America hate again.Around and around we go. Peter Lerman was a fine narrator. I was given this free review copy audiobook at my request and have voluntarily left this review.

An Unbiased Look at Our Political Mess

Excellent unbiased look at where we are today. Highly recommended. Middle of the road perspective.

Lots of good things to think about. Many things brought to light that should be.

I was hoping this book would be more non-partisan. At times it seemed that the author was critical of both sides of the isle, but he did lean toward the left.

Narrator was very matter of fact and monotonous at times but a good fit for the content.