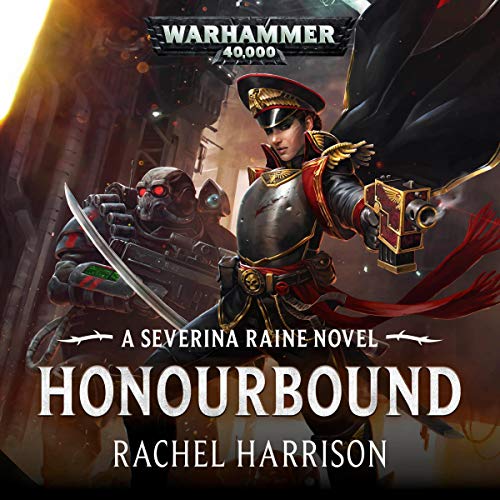 The hero of a series of short stories returns in her first full-length novel – and it's as grim, dark and brilliantly written as you'd expect from Rachel Harrison. Uncompromising and fierce, Commissar Severina Raine has always served the Imperium with the utmost distinction. Attached to the 11th Antari Rifles, she instills order and courage in the face of utter horror. The Chaos cult, the Sighted, have swept throughout the Bale Stars, and a shadow has fallen across its benighted worlds. A great campaign led by the vaunted hero Lord-General Militant Alar Serek is underway to free the system from tyranny and enslavement, but the price of victory must be paid in blood. But what secrets do the Sighted harbour, secrets that might cast a light onto Raine’s own troubled past? Only by embracing her duty and staying true to her belief in the Imperium and the commissar’s creed can she hope to survive this crucible, but even then will that be enough?

I gave up an hour into this book as I simply couldn't stand the narrator. Her performance as male voices is so bad that it breaks my concentration and stops the story for me every single time she tries to speak as a man.

I don’t mean to sound harsh but I had to listen to this book on double speed to get through it. It should have been read instead of performed, and story wise, I would recommend Gaunt’s Ghosts instead.

Plenty of narrators struggle with opposite gender voices. But this was terrible to listen to. Some of.the male characters sounded like they had suffered a lung shot for the entire book. Cringe.

I listen to nearly all of the W40k books as they become available, I work long hours and always have one playing.

I personally had no issues with the narrator, I thought she did a great job, but the writing was fantastic. I’m a fan of the Fabius series by Josh Reynolds, most books by ADB, and Chris Wraight - if you are too then you’ll likely enjoy this.

the voice acting was all over the place. breaks the immersion. like why not get another va to help.

The Danger of Stretching A Short Story To A Novel

Warhammer 40k is a beautiful setting because any story can be told in it convincingly.... this one drags out a generic guard story that only gets good at the end. Once you figure out The Sighted are Tzeench cultist the ending and plot twist is obvious, and it feels like a slog getting to the point Raine realizes it 2/3 of the way in.

Having read Commisar Cain stories Raine seems relatively underdeveloped; her character being defined by family shame, self doubt, and forbidden love with little nuance. Instead of developing her into a rounded person, the book focuses on several secondary characters that are likewise simply defined by the same things.

The best part of the audiobook is the narration. simple cultist are made to feel like an army of slasher movie villains. The Sighted's voices sounding like talking crows. The guardsmen judge each other by their accents and they are given them down to planetary regions. There is one particular generic horror movie scene that is played very well, despite you knowing how it would play out.

The story is great even though the timing in it is a bit of, my only gripe is that it needed one more narrator for the male characters.

Ugh, this is the side of the Black Library I find painfully boring. When your only gears are grimdark, duty-rific, and grim-darker, it just blurs into bad, monotone melodrama. Somebody has to act like an actual person for a SECOND every so often for any of the grim stuff to have any impact, otherwise it's just no stakes/who cares.
If you like playing D&D with a party of angsty edgelord rogues, have fun, clearly it's working for someone. If that sounds like actual torture, there are plenty of other 40K titles that manage to be dark while having characters interesting enough for the darkness to seem like it matters to them. Requesting a refund.

The best Commisar story since Ciaphas Cain. The main difference is this story is far more serious.