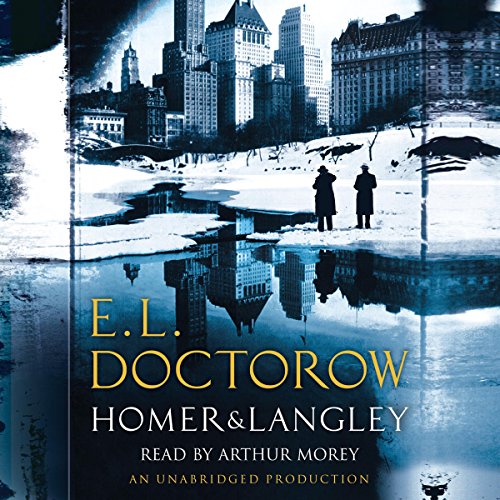 “Beautiful and haunting...one of literature’s most unlikely picaresques, a road novel in which the rogue heroes can’t seem to leave home.” (The Boston Globe)

Named one of the best books of the year by San Francisco Chronicle, Chicago Tribune, St. Louis Post-Dispatch, The Kansas City Star, and Booklist.

Homer and Langley Collyer are brothers - the one blind and deeply intuitive, the other damaged into madness, or perhaps greatness, by mustard gas in the Great War. They live as recluses in their once grand Fifth Avenue mansion, scavenging the city streets for things they think they can use, hoarding the daily newspapers as research for Langley's proposed dateless newspaper whose reportage will be as prophecy. Yet the epic events of the century play out in the lives of the two brothers - wars, political movements, technological advances - and even though they want nothing more than to shut out the world, history seems to pass through their cluttered house in the persons of immigrants, prostitutes, society women, government agents, gangsters, jazz musicians . . . and their housebound lives are fraught with odyssean peril as they struggle to survive and create meaning for themselves.

“Doctorow paints on a sweeping historical canvas, imagining the Collyer brothers as witness to the aspirations and transgressions of 20th century America; yet this book’s most powerfully moving moments are the quiet ones, when the brothers relish a breath of cool morning air, and each other’s tragically exclusive company.” (O: The Oprah Magazine)

“A stately, beautiful performance with great resonance.... What makes this novel so striking is that it joins both blindness and insight, the sensual world and the world of the mind, to tell a story about the unfolding of modern American life that we have never heard in exactly this (austere and lovely) way before.” (San Francisco Chronicle)

“Cunningly panoramic...Doctorow has packed this tale with episodes of existential wonder that cpature the brothers in all their fascinating wackiness.” (Elle)

“Following the panoramic scope of The March, Doctorow creates a microcosmic and mythic tale of compulsion, alienation, and dark metamorphosis inspired by the famously eccentric Collyer brothers of New York City.... Doctorow has Homer, who is blind, narrate with deadpan humor and spellbinding precision.... Over the decades, people come and go - lovers, a gangster, a jazz musician, a flock of hippies, but finally Homer and Langley are irrevocably alone, prisoners in their fortress of rubbish, trapped in their warped form of brotherly love. Wizardly Doctorow presents an ingenious, haunting odyssey that unfolds within a labyrinth built out of the detritus of war and excess.” (Booklist)

“A sweeping masterpiece about the infamous New York hermits, the Collyer brothers.... Occasionally, outsiders wander through the house, exposing it as a living museum of artifacts, Americana, obscurity and simmering madness. Doctorow’s achievement is in not undermining the dignity of two brothers who share a lush landscape built on imagination and incapacities. It’s a feat of distillation, vision and sympathy.” (Publishers Weekly)

“Doctorow works his usual magic in bringing history to life and larding it with disturbing implications.... As with much of Doctorow’s masterful fiction, Homer & Langley turns the American dream on its ear, offering us a glimpse of the dark side of our national - and personal - eccentricities.” (BookPage)

Good On So Many Levels

This book was selected by Cornell University for the 2011 Reading Project. Incoming Freshman read the book and can attend 6 lectures on it during Orientation. Other students, faculty and alumni are also invited to read the book. Addicted to audio books, I was delighted to find this on Audible. It did not disappoint.

The author brings to light the logic of these two illogical brothers. His prose is compelling and beautiful. The march of history through the living of their lives is informative. I especially enjoyed the philosophical observations that come out of the telling of this tale by the youngest brother, Homer.

The narration is a bit monotone but completely fits the character of Homer and only adds to the feeling of the book.

Here is why it was chosen by Cornell:
Homer and Langley provides a fictionalized redaction of the lives of the renowned Collyer brothers, whose story became a New York urban legend. In Doctorow’s words, “I was a teenager when the Collyer brothers were found dead in their Fifth Avenue brownstone. Instantly they were folklore. I didn’t know at the time I would someday write about them, but even then I felt there was some secret to the Collyers. There was something about them still to be discovered under the piles of things in their house—the bales of newspapers and the accumulated detritus of  their lives.”

In today’s world, the phenomenon of over-accumulation has even become fodder for television reality programs. How about taking a look at the subject from a literary angle? Sound intriguing to you? Homer and Langley generates a variety of topics for discussion and exploration including major events of 20th-century America, from Prohibition to flower children, the modern media phenomenon of “reality,” the significance of community, the psychology of hoarding and the claims of family, as well as sustainability, news, rebellion and autarky, or self-sufficiency.

Once again, Doctorow has shown his mastery of the language. There are so many fine phrases and sentences here I had to buy the book and underline about 40 percent of it after I finished listening. His changing and embellishing of the story gave him the opportunity to deal with popular topics of the time that he would not have been able to touch had the retold only what the papers recorded about these fascinating brothers. This is a gem and a remarkable study of family ties, responsibility, inability to conform and the changes in the American psyche in the 20th century. I highly recommend for anyone who appreciates good writing. The narrator is especially good.

I'm not sure I can bring myself to fully approve how EL Doctorow made a departure from the facts of the Collyer brothers biographies. Its been a while so I dont' recall the specifics.
But as I gradually coaxed myself into just enjoying the story, I found myself enjoying it more and more. Narrator/Lector has a wonderful voice, just right for the material.

Loved the book and the performance.

If you are looking for a lot of action, this is not the book for you. However, if you enjoy insightful character analyes and touching stories, this is your book. Doctorow and Morey humanize these quirky Collyer fellows in a great way.

I finished this a few months ago and I still think about it. Fascinating story, well written. I highly recommend it.

Nice writing but a disappointing read. A chronicle of events (mostly not true, apparently) without much of a story line. The two brothers grow more and more indiosynchratic and reclusive, people and major world events come and go, and then it's over. The ending is fairly disturbing - I had nightmares about being left in the same situation as Homer at the end.

I listened to this book pretty much over a single weekend. The writing is well done and you care for the protagonist, but, the storyline is meandering and seems pointless. It certainly sparked my interest in finding out the "real" story behind these two recluses. As others have pointed out, the truth of their lives needs little embellishment, yet this author decided to fabricate many of the details. It wasn't a bad book, just slightly disappointing. I found E.L. Doctorow's, The March, a more satisfying listen.

I barely made it through this book. Generally I'm a fan of small details when they lend authenticity & add a visual element to the story. This book did neither.

Major disappointment.
Given the famously freakish source material; and the fact that the author MADE MUCH OF IT UP! This simply should have been so much better.

I am perhaps being unduly harsh because I mistakenly thought this a work of real historical biography. I had first heard about these famous reclusive brothers in my childhood and was excited to learn the "real story" about them. But from early on, this book hit so many inauthentic notes; both philosophical and "chronological" That I was prompted to STOP LISTENING and check it against the source material. It is here that I discovered the intended formula was anything but accurate or even meaningful, in my humble, snarky opinion.

Therefore, I confess my extreme disappointment comes from "flawed" expectations. I guess I'm writing mainly to forewarn any other potential listeners who may come to this book equally unprepared.

To be clear, I was aware of Doctorow's significant reputation - but only very indirectly through film adaptations of his earlier books. However, I would still argue that such a literally talent, under no pretentions of telling the "real story" could and should have made this a far more provocative or at least moderately entertaining story.

this is my favorite modern novel. the reading is very well done also. cannot reccomended it enough.