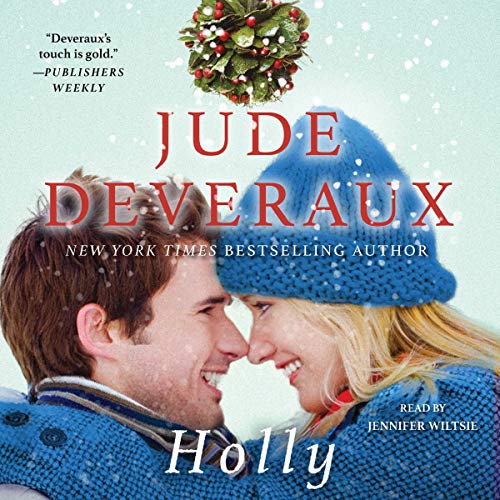 At the tender age of 13, Holly fell in love with Lorrie Beaumont, who inherited the Revolutionary-period estate when his heiress mother died during childbirth. Though more than a decade has passed since Holly last locked eyes with her childhood love, the passion she felt in her young heart has never come close to extinguishing - that is, until charming, ruggedly handsome Nick Taggert unexpectedly waltzes into her life and treats her to an unforgettable weekend of laughter and intense passion.

Will Holly be seduced by Lorrie's wealth and privilege, or will she choose the simple gift of love that Nick has offered her? The answer is unveiled on a starry Christmas night, when passion, hate, and greed collide to reveal bitter truths that will forever change the course of Holly's charmed life.

Would you consider the audio edition of Holly to be better than the print version?

What could Jude Deveraux have done to make this a more enjoyable book for you?

I do not like homosexuals in my reading. If writers are going to add this to their books, it should be stated on the jacket. I would not recommend this book. I use to read Ms. Deveraux's books years ago, and if this any indication of her new books, she will be removed from my reading list.

I am not pleased with the story. I will be returning this book.

Would you consider the audio edition of Holly to be better than the print version?

I always enjoy having audible versions of great stories. I love this author's work and am glad to have it in audio version.

fun but not one fo Jude Deveraux's best...

What did you love best about Holly?

I love the mystery and discovery of legend and that Ms. Deveraux's leading woman are a bit average, but have great gumption. Holly had some fun banter and the idea of the hidden treasure was alluring enough for me to read this book.

The most interesting part was waiting to see how it would all play out. It was predictable in the fact girl gets guy, but the journey was fun, although not extraordinary.

What does Jennifer Wiltsie bring to the story that you wouldn???t experience if you just read the book?

I'm not sure she brought anything to the story, but she was pleasant enough to listen to.

No extreme reaction. i chuckled a bit, but it wasn't one of my favorite Jude Deveraux stories.

This isn't a book high on my list of Jude Deveraux recommendations. There was a lot more sex than substance in this book. There were fun moments, but more story would have been nice. The characters were a bit shallow and unsubstantial which is a change from my normal reaction to Ms. Deveraux's writings.

Love happy endings but more when the ending is in a way that it just falls as perfect like a curtain at the end of a play! Makes me want to read it and listen to it again.

It was good just felt rushed. I wish there was more back story of the "bad guys" lives.

The story is about a guy who loves a girl early on in the book and pursues her by being nice and showing true interest in what she likes. It was a good story. My favorite by Jude Deveraux so far.

What other book might you compare Holly to and why?

It reminds me Jude Deveraux's, The Princess, which is even referenced in this story. Another high-class wealthy woman paired with a seemingly lower-class man, at least, as far as she is concerned.

The book is very short but enjoyable. A fun read. I just wish the characters were a little more fleshed out.