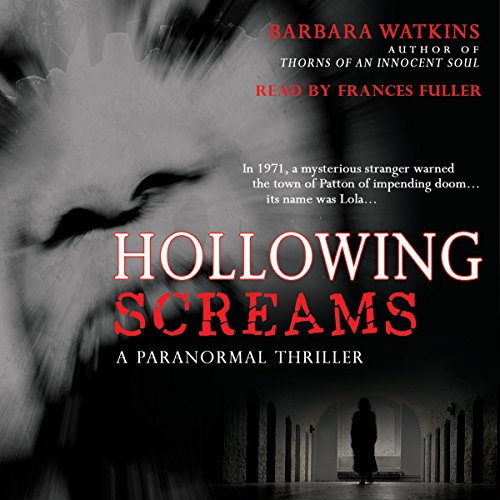 It is bizarre to say in our civilized culture that some human beings still act out in a violent, primitive manner causing bodily harm and death. For this reason alone, incarcerating facilities will always exist. The terror of being thrust into a world in which time cannot be calculated, distance cannot be measured, and our own true existence is in question is incomprehensible.

In 1971, a mysterious stranger warned a small community of their impending doom. She prophesied that if they ignored her warnings they would experience a chain of devastating events. The outcome of their fate would remain in whether they chose to believe in something that could not be scientifically validated. Is it safe to say that unexplained phenomenon does exist? If you asked the people of Patton, they would say, "Of course it does and its name is Lola."

This story gives you the creeps because it is something very disturbing, but at the same time it is something that could really happen. We sometimes forget that sociopaths live among us in normal society and are capable of horrible things. Also, Frances Fuller's narration really adds to the experience. Her soothing voice makes it even more eerie! She also has a way of conveying the emotional attitude of the characters without overdoing it. A great read overall.

You will be looking over your shoulder

If you could sum up Hollowing Screams in three words, what would they be?

The team of Fuller and Watkins deliver with the psychological thriller, Hollowing Screams. Frances Fuller artfully narrates this roller coaster ride that you can’t stop riding - bringing to life a long list of diverse characters, keeping the listener hooked by conveying the appropriate tone and emphasis, uniquely capturing the essence of that which we all fear: The Supernatural. Barbara Watkins reveals the lives of the folks who live in the small town of Patton, Mississippi where evil has decided to make its home by weaving effortlessly the stories, characters and lies.
If you enjoy listening to a scary ghost tale told around the campfire, then you will be in for a real treat. Watkins creates a tale where very little is as it seems while Fuller focuses the listener’s attention on the nuances that make a good ghost story – scary. From the onset, the listener is drawn in by the mystery Watkins has created regarding the uneasiness that continues to grow as the story is unraveled. Fuller’s additions of capturing the nuances of those who live in a small town buried deeply in the South bring this ghost story to life.
More than once, you will find yourself glancing back over your shoulder as you would do if you were sitting out in the woods. Like any good ghost story, there is proof that an irony will prevent the small town from ever being freed from the claws of the monster(s) who visit their little town.
On your next camping trip, listen to this ghost story on the way to that secluded spot in the woods. Once you have made camp, I bet you will be looking at your fellow campers just in case, and by nighttime, well, let’s just say: I bet you will be looking over your shoulder to make sure you are in fact safe.

Have you listened to any of Frances Fuller’s other performances before? How does this one compare?

Things are never what they seem...

What would have made Hollowing Screams better?

What was most disappointing about Barbara Watkins’s story?

No heart, no feeling, too monotone