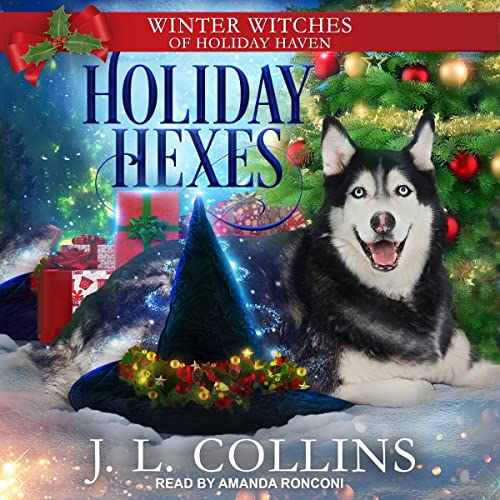 Have yourself a very Merry Witchmas in Holiday Haven, where the magic and mystery of Christmas is snow joke!

Top toy designer Star Clearwater is convinced that Christmas is cursed. What's supposed to be her hard-earned vacation turns into chaos when her mother lures her to the North Pole only for all spell to break loose at her arrival.

A heinous hex threatens the entire toy production inside Santa's Toy Workshop, putting millions of children's wishes in jeopardy. If her mother - who reports directly to Mrs. Claus - can't get things under control, Christmas won't be the only thing getting canned.

Star has no choice but to crash at her mother's cottage in the charming magical town of Holiday Haven. The sooner she can find the Scrooge responsible for the crime, the faster she can get back to her normal life.

Armed with her witchy wits, Star accepts help from a talking husky and the cute guy running the town bookstore as she follows the trail while the countdown to Christmas Day ticks away.

Will Star find a way to catch the criminal and reverse the hex? Or will Christmas be canceled this year?

This was my first title by J.L. Collins and of course 3rd title in the Holiday Haven series. This story takes off at a very fast consistent pace and Star Clearwater is quickly pulled into a Christmas emergency via their mother who lives in Holiday Haven. This is a good start to a series within a series. So far despite all the authors operating in this Winter Witches of Holiday Haven all the stories seem self-contained and do not cross over into each other, which I kind of wish they would at least a little. Sometimes the volumes feel like the stories are taking place in totally separate boroughs of the city. But I completely understand how hard it could be to coordinate things with this many authors but maybe having a couple shared businesses across the different books. The romance is light and easy as is the mystery. The characters also feel at an early stage. We have Star, her mother Gloria, Chaser the Husky familiar, and Everett the neighbor/love interest. There is some funny uses of magic and it's a relaxing listen while you are taking care of other things, but I would like to see J.L. build on the characters and flesh them out a little more if follow up series. I always love Amanda's narration and wish they would let her do the entire series, would be a great way to tie the series together as well. Of the first three books in the WWOHH the first is still my favorite but this would be the runner up. Again this series isn't blowing my socks off but kind of like a Hallmark movie: formulaic, light, fun, guaranteed happy endings with a few laughs in between. I did decide to check out one of J.L.'s other series on audible just to get a sense of their work but will look forward to future installments about Star in WWOHH.