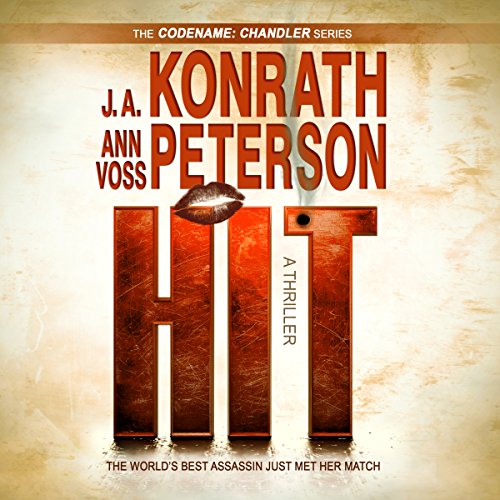 She's an elite spy, working for an agency so secret only three people know it exists. Trained by the best of the best, she has honed her body, her instincts, and her intellect to become the perfect weapon.

Before special operative Chandler was forced to flee, she executed the most difficult missions - and most dangerous people - for the government. So when she's ordered to eliminate a crooked corporate CEO in a manner that looks like natural death, it's a regular day at the office... until she discovers she's not the only assassin hunting this particular prey, and her competition is aiming to make this hit into a political statement that will shake the nation.

The world's deadliest assassin just met her match... Hit is a short novel and is part of the Codename: Chandler series. The order is as follows: Hit, Exposed, Naughty, Flee, Spree, Three, Free.

really good loved the action. not much suspense but a great contract killer match up.

I didn’t care for this book

Out of all the books I’ve read by J A Konrath I didn’t care for this one.

The story and the story teller were boring.

Not worth the money.

Don’t care for the narrator -male voices were horrible.
Storyline was great and love the characters

HMMM.. Not that great.

So I read/listened to this after Flee Spree and Three and was a bit disappointed to say the least. The story was not so good. But the narration was horrendous to say the least. It was absolutely awful and I really struggled to get through it. Maybe just reading this book and not listening would have been a better option.

I cannot recommend this audible listen at all.

I liked the story. I liked the characters. i actually read the later ones first. the narration on the other hand... NOT BAD dont get me wrong but she doesnt sound as strong or spy like as the later ones. her Spanish accent sounds French.

I enjoyed the story.

The dialogue parts of the narration were good for the most part. The rest I didn't enjoy. Reminded me of text to speech.