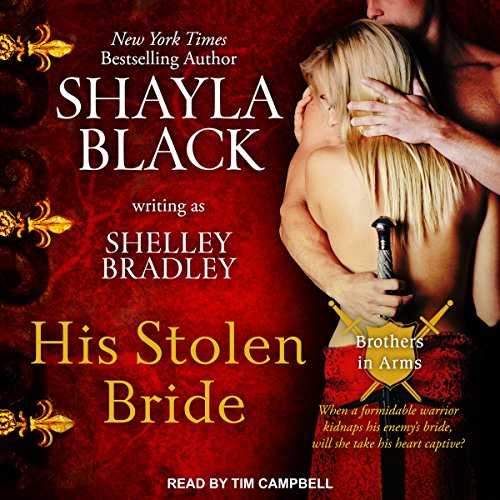 Wrongly accused of murdering his father, Drake Thornton MacDougall wanted nothing more than to strike back at his guilty, duplicitous half brother. So he made the fiend pay by abducting his bride-to-be. But as Drake carried his captive off to a windswept Scottish isle, he soon found that vengeance wasn't the only thing on his mind.

Lady Averyl Campbell proved herself no biddable maiden but an alluring, strong-willed beauty who could tame his dark moods with her touch. When danger and treachery threatened to part them, Drake realized that only she could heal his tormented soul, for she had won his love.

When sibling rivalry leads to murder, one brother plots to destroy the other brother's devious plan to include stealing his future wife. The only problem is getting his new stolen wench to realize she's pining for the wrong brother. This book is well written with lots of drama, action, and steamy hot romance.
Tim Campbell's narration was superb!!
Every scene was extremely well acted. I say this deliciously devouring story was most definitely worth a credit.

This second instalment is so good. Drake is a very troubled man and rightly so and Averyl is very strong willed and a little nieve. This is a mature themed book and that's no lie. The additional supporting characters also add to the enjoyment of this book. For me His Stolen Bride is a total package of action, deceit, treachery, loyalty, and love. You name it, it has it, very enjoyable.

The story is simple but made complicated. Two bothers out to kill one another. One kills the father and blames the other. The other steals his brother's future bride as part of the revenge. Of course, the two will eventually become an item... hence the HEA. However, he has to wait till she turns 18... that I didn't understand. Why the wait. Get on with the revenge. The wait dragged on. It made the story a bit hard to imagine how she was hidden away for months.

Tim Campbell's narration was perfect. He was able to bring the book to life. Job well done.

The chemistry between the two and their hot and steamy scenes made the book worth it. However, I wasn't really bought into the logical flow of the story.

Shayla Black did an excellent job of keeping you in thralled in the story. You can't help but want to know how it all plays out. Tim Campbell give great voice to every character.

Story was ok. Dialogue was pretty sad. Sounded like a very bad 1950s knight movie. Sensual and I liked Averyl better than Gwyneth from the first book but not overly fond. I wouldn't waste a credit...I got these as part of the romance package so I didn't blow credits. Tim Campbell was good but his Kieren voice was weak.

Love this series and narration!

I love historical highland romances. This story was well written, interesting and also included the hero’s two friends from the previous book. Tim Campbell was marvelous as usual. He is excellent with men and women’s voices. I could listen to him all day.