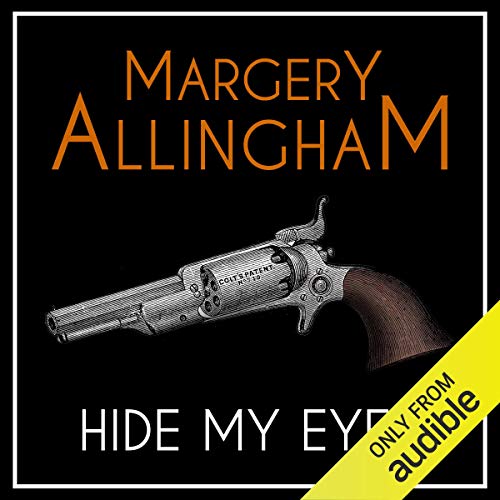 In Hide My Eyes, Campion finds himself hunting down a serial killer. A spate of murders leaves him and his friend and colleague Inspector Luke, with only the baffling clues of a left-hand glove and a lizard-skin lettercase. However a chain of strange events leads them to an odd museum of curiosities hidden in a quiet London neighbourhood where there is more going on than meets the eye.

Would you consider the audio edition of Hide My Eyes to be better than the print version?

Have not read the print edition.

Her characterizations are always excellent. People are vivid, well-rounded, unusual and individualistic.

Have you listened to any of David Thorpe’s other performances before? How does this one compare?

David Thorpe is fantastic. Although most people say that Frances Matthews reads Allingham better (and he is great), David Thorpe pushes the envelope and makes each character so individualistic. He has great enthusiasm and attention to detail in his reading. People don't like the high whine he puts into Campion's voice, but that is how Allingham describes Campion's voice in Black Dudley.

I wouldn't make a film of it as, although it was good, it was kind of a pale shadow of Tiger In The Smoke.

Allingham can do no wrong.

This time we get into the mind and habits of s serial killer, pursued by a wider circle of interested parties. Excellent and very modern, and Charles Luke really shines. My only complaint is that Lugg and Amanda don't play a part.

My main disappointment is that there isn't mjuch of Campion in it. And I didn't like that it almost made a virtue of sticking with a criminal to the end.

This book is too long and the reader has made the voices so different from previous books that nothing rings true.