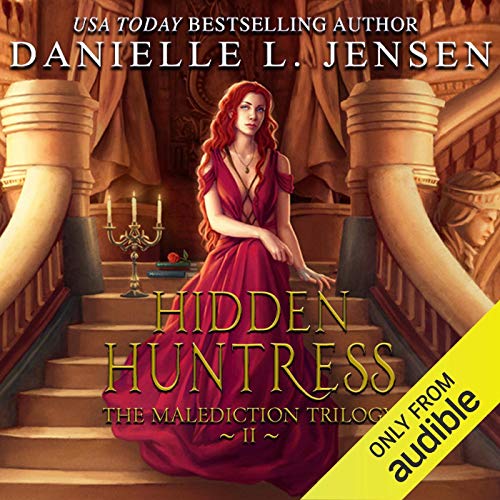 Beneath the mountain, the king's reign of tyranny is absolute; the one troll with the capacity to challenge him is imprisoned for treason. Cecile has escaped the darkness of Trollus, but she learns all too quickly that she is not beyond the reach of the king's power. Or his manipulation.

Recovered from her injuries, she now lives with her mother in Trianon and graces the opera stage every night. By day she searches for the witch who has eluded the trolls for 500 years. Whether she succeeds or fails, the costs to those she cares about will be high. To find Anushka, she must delve into magic that is both dark and deadly. The witch is a clever creature, and Cecile might not just be the hunter. She might also be the hunted.

Very Young Adult Fantasy. could not finish it.

I read the first book and was interested but it was frustrating. The plot was thin, and predictable with all the staple fantasy character types. I was curious enough with the plot to start the second book but could not finish it. Definitely not a YA book that holds up for adults, After the first several chapters, I could not go on with the second book.

The characters are not really likable, they seem to walk into every situation with their eyes shut to every danger, and so much of the story is musings in the first person by the two main characters, usually berating themselves for doing something wrong. The premise was interesting and I really wanted to like the book, but could not. Several other reviewers stated they got frustrated when they had seen the solution or action and the protagonist could not. I agree and don't feel that wanting to yell at your main character is a good reaction to a book.

I really did not enjoy the readers either, I found their voices distracting and the French accents on the proper names but nowhere else just made me cringe. It would have gone better with a gentle French accent overall or just Anglicizing the French words just a little so that they did not seem harsh and out of place in the middle of a narrative in English. Several times the female narrator pronounced the same name La Voisine in different ways. It was distracting. Maybe one of those books that read better than listen. I would recommend for a younger crowd save for some very violent scenes.

Its okay. I dont feel like its written very well. I feel like she was coming up with ideas as she wrote and just through it all together.

I am always so glad to find a new author and this one is great. The two narrators are wonderful and really added to the enjoyment of the book. I am just sad I have to wait so long for the concluding book.

I wanted to SCREAM at the characters for not figuring out the "plot twist" when I did. Seriously frustrating when you figure out what's going on half way thru the book and everyone else is clueless. With all that being said... I still do enjoy this story. Like with a lot of second books this one was a bit slow and felt like a really big build up for book 3. I will definitely be reading that when it comes out:)

The only thing I have to complain about this book is when you realize the plot twist before the characters and it literally makes me go mad since its in front of their face the whole time. I like being able to follow along the the characters as they discover it or make my own assumptions, not being a head half way through the book. That just makes it feel like the book is being dragged.

Omg!!! Like other listeners I am so annoyed at the transparency of this plot!!! I knew who the villan was in the first 30 minutes but I kept listening hoping there would be a twist. No such luck. What a waste of my credit. I am very disappointed.

Loved this book. Exciting story right from the start! Almost better than the first one.

Even better than book one! Great story line. Can't wait until the third is released.

Not as good as the last.

This book bothered me a great deal with the many contrived reasoning why they couldn’t be happy with Tristan getting out. Example, not wanting to take off the manacles. Stupid they were killing him and thus her and if he was dead everything for the trolls is lost. However, he didn’t want her to take them off??
I knew the witch was her mother and how she was prolonging her life early on in the book and it was annoying watching the characters fumbling around trying to figure it out. There were several other illogical things that bothered me during this book so I am not giving it as high of stars as the others.

Where does Hidden Huntress rank among all the audiobooks you’ve listened to so far?

For a second book it didn't seem as un needed as some others that I have read. I'll be listening again and again

What other book might you compare Hidden Huntress to and why?

When the plot is finally laid out.

No, but I'm not very emotional

Very interesting listen. Kept me wondering about what was about to happen. I did guess correctly on who the villain would end up being but I couldn't figure out the entire plot.