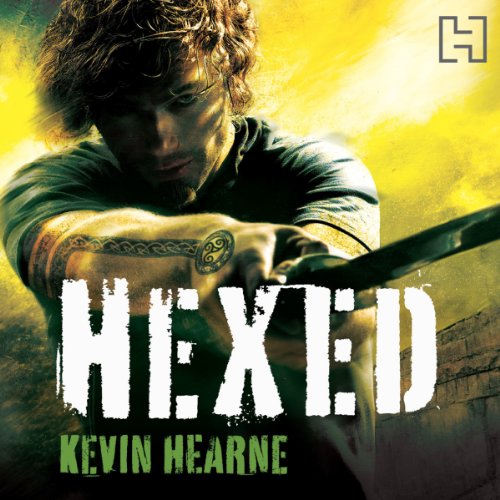 Atticus O'Sullivan, last of the Druids, doesn't care much for witches. Still, he's about to make nice with the local coven by signing a mutually beneficial nonaggression treaty - when suddenly the witch population in modern-day Tempe, Arizona, quadruples overnight. And the new girls are not just bad, they're badasses with a dark history on the German side of World War II.

With a fallen angel feasting on local high school students, a horde of Bacchants blowing in from Vegas with their special brand of deadly decadence and a dangerously sexy Celtic goddess of fire vying for his attention, Atticus is having trouble scheduling the witch hunt. But aided by his magical sword, his neighbor's rocket-propelled grenade launcher, and his vampire attorney, Atticus is ready to sweep the town and show the witchy women they picked the wrong Druid to hex.

This is book two of the Iron Druid Chronicles. If you would like to hear more, you'll find the first chapter of book three at the end of this recording.

" Hexed is an excellent sophomore effort by Kevin Hearne who is quickly becoming one of my favorite authors. In short, I highly recommend picking up the Iron Druid Chronicles, which just might make you forget about other urban fantasy novels..." ( Fantasy Book Critic)

Why the change in narrator

I heard this book a when it was first released and narrated by Luke Daniels this new guy is just wrong and what has he done to Oberon, Bleerggg.
Otherwise this is a great book I will be changing over to written word for this series

The series has one of the best narration performances I have come across for a while. Christopher Ragland is a contender for the best narrator of audio books.

I recommend this book to anyone that enjoyed book 1. For those who have not read book 1, I recommend starting there first.

Those with rigid religious views should avoid this book. Some references, all with good humor, are made to many religions including christianity. So far in the series the main character has interacted with figures from many religions, including having a beer with Jesus.

The main character can communicate with his dog via some sort of telepathy. Some of the best lines are voiced by the dog. The dialog involving the dog character are very funny, but also convey a child like innocence and the unique quality of K9 enthusiasm familiar to most dog owners. I love the way the narrator voices the dog character.

The author unashamedly borrows from just about every mythology to weave this highly entertaining tale. Witches, Greek Gods and Thor and just some examples of the characters used. In keeping with the humor of this book his layers are Werewolves and vampires.

I'm not even through yet, but this audiobook deserves a perfect score right now...

Usually I rate good, because I mostly buy books knowing that they will meet my expectations... But "dude", this one is different. It not only meets my expectations but exceeds them by a high degree.

I heard the first part in my native language (which is german) and it was quite good... but now I think about listening to that one again in the original version because Christopher Ragland is such a genius who invokes the characters with real life (especially Malina, Oberon, Gronjaveil and of course Atticus). Overall I'd say this audiobook... "That is so f...ing cool... I'm sorry I mean, It makes the light shine into my soul..." :D

I can only recommend that everyone reads/hears this. Perfect! So funny and full of emotions. Thank you so much audible, Kevin Hearne and Christopher Ragland! You make me laugh out load while listening.

Cheers and have a nice day.