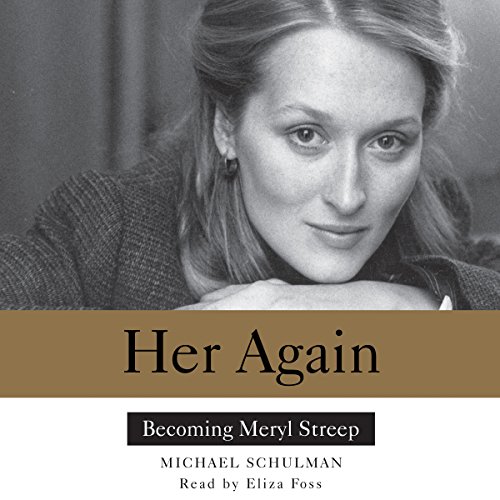 A portrait of a woman, an era, and a profession: the first thoroughly researched biography of Meryl Streep - the "Iron Lady" of acting, nominated for 19 Oscars and winner of three - that explores her beginnings as a young woman of the 1970s grappling with love, feminism, and her astonishing talent.

In 1975, Meryl Streep, a promising young graduate of the Yale School of Drama, was finding her place in the New York theater scene. Burning with talent and ambition, she was like dozens of aspiring actors of the time - a 20-something beauty who rode her bike everywhere, kept a diary, napped before performances, and stayed out late "talking about acting with actors in actors' bars". Yet Meryl stood apart from her peers. In her first season in New York, she won attention-getting parts in back-to-back Broadway plays, a Tony Award nomination, and two roles in Shakespeare in the Park productions. Even then, people said, "Her. Again."

Her Again is an intimate look at the artistic coming of age of the greatest actress of her generation, from the homecoming float at her suburban New Jersey high school through her early days on the stage at Vassar College and the Yale School of Drama during its golden years to her star-making roles in The Deer Hunter, Manhattan, and Kramer vs. Kramer. New Yorker contributor Michael Schulman brings into focus Meryl's heady rise to stardom on the New York stage; her passionate, tragically short-lived love affair with fellow actor John Cazale; her marriage to sculptor Don Gummer; and her evolution as a young woman of the 1970s wrestling with changing ideas of feminism, marriage, love, and sacrifice.

This captivating story of the making of one of the most revered artistic careers of our time reveals a gifted young woman coming into her extraordinary talents at a time of immense transformation, offering a rare glimpse into the life of the actress long before she became an icon.

A fascinating biography of someone we thought we knew

I went to high school with Meryl Streep and starred in two of the school’s musicals with her. In this book I learned so much more about her beginnings and the birth of her exceptional talent that has endured for 50 years. There are also several other actors like Sigourney Weaver who acted with her in school at Yale. So much fun to get the complete background of her story.
The narrator’s voice is similar to Streep’s so that added to the enjoyment. Loved it!!

Unless the listener/reader is particularly interested in the minutia and detail of who each and every teacher, director, co-actor's name, date, and tiny details, this is a waste of time.There is ultimately a very small amount of information for the average reader/listener who is not in show business, who wants to learn about this exceptional actor. It seems like the author looked up newspaper clippings from the past and just paraphrased the entire book based on research. There is no first person information on Meryl Streep.

What could Michael Schulman have done to make this a more enjoyable book for you?

Cut the minutia and give information about her entire life. Not just her work life.

This reader had a very sarcastic tone in much of the reading. I have listened to dozens of books and this is first thumbs down on the reader, in my experience.

that sums it up.

Not very interesting. Like a giant collection of tabloid articles. Parts regarding John Cazelle were most interesting.

I am not liking this book, can't seem to finish it. The swearing and content is not uplifting. I'm need to send it back....before the book I really like her.

Book was basically a resume high school through Kramer and Kramer.
1/ 3 of book was about Kramer and Kramer
Didn't touch on all of her success since then.
Very little of her personnel experience more like a resume read from a show business newspaper

Not at all the biography I was hoping it would be. Too much detail about the process and actors in the 1960-70's.

Until I read this delightful biography of Meryl Streep, I had no idea that her talent made some acting teachers at Yale so jealous, they put her on probation. Or that Dustin Hoffman had slapped her and upstaged her and sexually demeaned her during the shooting of Kramer versus Kramer. Or how good Joe Papp had been to her even when she was an hour late to her first audition. This book has so many stories about Meryl and her famous colleagues, it is never less than fun. And so much insight into the art of acting, it is useful too. I enjoyed it and only wished it were longer. #MerylStreep #ActingLesson #CelebrityAnecdotes #Delightful #GreatStarBio #Tagsgiving #Sweepstakes

Would you listen to Her Again again? Why?

No, once was enough.

Which character – as performed by Eliza Foss – was your favorite?

It made me think how intelligent and strong women Meryl was during her early years. This helped her move through a world that preyed on weakness. I understand now why she wasn't taken advantage of by this world.

It went into great depth in the early but just skimmed the rest.

Don’t get this book! Narrator is awful. She totally gets in the way of the written word (which isn’t great). Snarky, sarcastic.

This has to be one of the most boring books I have ever listened to. I couldn’t finish it.