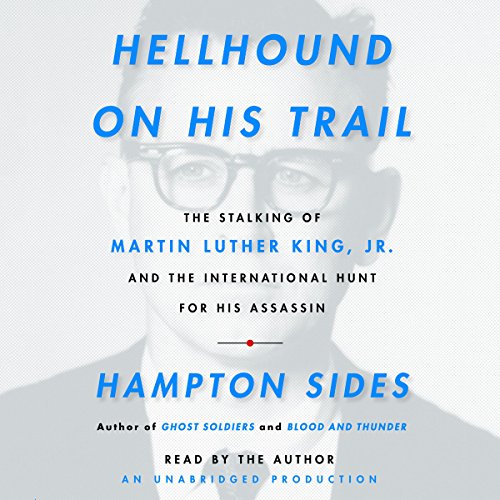 Hellhound on His Trail

From the acclaimed best-selling author of Ghost Soldiers and Blood and Thunder, a taut, intense narrative about the assassination of Martin Luther King, Jr., and the largest manhunt in American history.

On April 23, 1967, Prisoner #416J, an inmate at the notorious Missouri State Penitentiary, escaped in a breadbox. Fashioning himself Eric Galt, this nondescript thief and con man - whose real name was James Earl Ray - drifted through the South, into Mexico, and then Los Angeles, where he was galvanized by George Wallace's racist presidential campaign.

On February 1, 1968, two Memphis garbage men were crushed to death in their hydraulic truck, provoking the exclusively African American workforce to go on strike. Hoping to resuscitate his faltering crusade, King joined the sanitation workers cause, but their march down Beale Street, the historic avenue of the blues, turned violent. Humiliated, King fatefully vowed to return to Memphis in April.

With relentless storytelling drive, Sides follows Galt and King as they crisscross the country, one stalking the other, until the crushing moment at the Lorraine Motel when the drifter catches up with his prey.

Against the backdrop of the resulting nationwide riots and the pathos of Kings funeral, Sides gives us a riveting cross-cut narrative of the assassins flight and the 65-day search that led investigators to Canada, Portugal, and England - a massive manhunt ironically led by J. Edgar Hoover's FBI.

Magnificent in scope, drawing on a wealth of previously unpublished material, this nonfiction thriller illuminates one of the darkest hours in American life - an example of how history is so often a matter of the petty bringing down the great.

"Sides's storytelling packs a visceral punch, and in Hellhound on His Trail, he crafts an authoritative and riveting account of two intersecting lives that altered the course of American history." (Amazon.com review)

I remember the final tumultuous years of the 60's as a televised tableau of rioting and demonstrations capped by the horrific nightmare of back to back assassinations. Hampton Sides examines the people and motives behind the events. Be prepared for new perspectives on the familiar characters of the headlines. Martin Luther King can't give up his mistresses, LBJ can't fathom why his War on Poverty doesn't prevent a demonstration on his doorstep, and J. Edgar Hoover does the right thing in the end. The pathos of the widow's walk -Coretta Scott King, Jackie and Ethel Kennedy- is masterfully retold. I sympathized with Ralph Abernathy as he surveyed the muddy wreck that once was the Poor People's March and is forced to come to terms that he will never be the leader that MLK was. By far, however, the most complex character was James Earl Ray, the product of a dismally poor, dysfunctional family of many generation's duration, cunning yet clueless, and so unremarkable that most acquaintances describe him as ordinary, if they are able to remember him at all. Thousands of lawmen in five countries bring to a successful conclusion one of the most extensive and successful manhunts of the twentieth century. The re-telling of the story is fast paced enough to read like a thriller, yet detailed enough for fresh insight into the era. Hampton Side's narration is understated and well done. I highly recommend the book and the author to anyone with an interest in American history and especially to those too young to remember social upheaval of the 60's.

This book should have been written years ago. I am a pretty astute history buff and thought I knew this story... but, honestly, I was surprised at how little I knew. The authors pace was fantastic and he did a good job of narrating his own book... which is usually a disaster. I highly recommend.

Could not stop listening

I was only 8 when MLK was killed, and somehow made it this far in life without knowing a lot of the details of this tragic event. This book fills in those gaps and does so in a way that makes it read like a thriller. I found myself skipping over my usual daily podcasts in order to finish this. The author doesn't whitewash over the flaws of King and his surrounding cast, but doesn't dwell on them unnecessarily, either. A very fine book.

The author reads and does a terrific job as well.

Compelling,credible.engaging,enthralling and incredibly researched and detailed. I was completely engrossed for the entire book. Even if you AREN'T interested in history, this book is as engrossing as any fictional thriller. Brilliant!

Proves that just because you know how it all ends up, a story can't be suspenseful. If you are interested in American history and generally enjoy police procedural stories, you will enjoy this book. Read by the author, which in this case is a good thing.

Completely engaging, fast paced, and well researched, this book is a must read. I was amazed at how little I actually knew about the King assassination. I am usually leery of books read by the author, and doubly so this time because the authors last book, Blood and Thunder,droned on like Ben Stine on downers.
I am happy to say that the author does a great job reading it, and it kept me entertained throughout the entire read. If you feel that you should know a little more about the MLK assassination, you will not be disappointed.

I listened to this book right after completing Taylor Branch's trilogy on the Civil Rights Movement. It was a fitting follow-up, as Branch's book ends (essentially) with King's assassination. This book is fast-paced without being frantic. It is informative and entertaining. Based on many reviews on this site that indicate that most authors do a poor job of reading their own work, I debated whether -listening- to this book was a good idea (in contrast to reading it). I'm glad I decided to listen to it; Hampton Sides does a good job in my view.

1968 was like an ongoing nightmare. Vietnam, assassinations, LBJ's decision to withdraw from the Democratic nomination process, riots in Chicago; there weren't a lot of slow news days. It may seem odd to say, but I don't think that the true horror and sinister aspect of Martin's assassination has ever been effectively documented. So many terrible things happened that year that the details of this story were lost.This book changes all that Hampton Sides has brilliantly captured the paranoia of the period where this gentle and visionary man was persecuted, stalked and murdered.
This is a great book on many levels. For me, it's a reminder of how much we all lost. This was a good man.

Such A Vivid Telling Of MLK's Murder

I was a little young to be aware of all of the details of Martin Luther King's life and death. This book really brought the details to life and helped me not only to understand how great a man and movement (the Civil Rights era) this all was, but the tremendous odds that had to be overcome.

This was an excellent book. I love when authors read their own work, and I couldn't have been happier with Hampton Sides. It reads like fiction, and makes learning about history fascinating. I was quite young when the events in this book happened, but Sides' story brought the world of Dr. Martin Luther King, Jr. and the events that were happening alive. The tragic assassination of King is worthy of reflection. I will recommend this book to everyone and have my children listen to it as well.