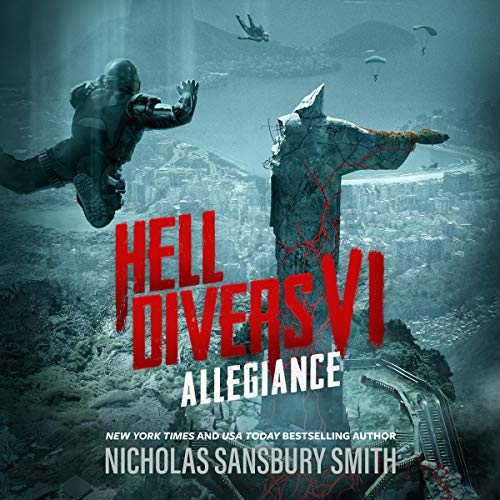 The war for the Metal Islands is over, but the search for survivors has just begun.

After a long and bloody battle, legendary Hell Diver Xavier Rodriguez reigns as the dutiful but reluctant new king of the islands. Advised by a council of former sky citizens as well as Cazadores, he works to assimilate the two societies peacefully. But not all Cazadores have accepted the new order.

While X tries to ease tensions at home, a rookie team of divers, led by Michael Everhart, returns to the skies in Discovery, formerly the ITC Deliverance. Their mission: To locate other human survivors throughout the world and rescue them. But Michael’s team aren’t the only ones searching for survivors. A gruesome discovery reveals that android defectors continue to hunt humans across the globe. And they may not be the only ones.

In a race against time, the Hell Divers may be the only obstacle to enemies bent on wiping out the final pockets of survivors and extinguishing the human genome forever.

Wow just wow. I don't know how he does it but he does. The deeper you get into this series the better it gets. Great job Nicholas!

Best HD Yet. And that’s a big deal.

Another incredible installment to the Hell Diver series that, in short, is simply amazing. Sansbury Smith has developed a truly unique version of the post apocalypse genre and part six just continues this incredibly fun and exciting journey. RC Bray, as always, creates an astoundingly realistic and easy to follow mental picture. He is the best ever. Thanks to you both. I’m just sad I have to wait for part seven. Hurry up, would ya? :)

By far my favorite series I've had the pleasure of reading. Non-stop edge-of-you-seat action, great storylines, and characters I genuinely care for. I can't wait for the next one, and while I wait, I think I'll have to go back and re-read the series.

Match made in heaven!!!!

Nicholas Sansbury Smith was born to write this series and R. C. Bray was born to give it it's voice. I've never heard a narrator more evenly matched to a series!!

Of course the story itself is absolutely fantastic. We already knew that from the first 5 books. But getting to hear it from Bray took it to another level. I had goosebumps chapter after chapter.

Thank you both for doing what you do!! But extra, extra thanks to Nick for writing such incredible stories and for being such a down to earth and supportive author!!

Another homerun from Smith. This whole series has been a surprise to me from the first book. I love love it. I was hesitant going into this as I was not a big sci fi fan but Smith won me over. I love how he wrapped the story of our favorite characters. I highly recommended this series to any sci fi, dystopian, post apoc or action book lovers.

the ride gets better as the story goes on.

NSS knows how to tell a story. just when you think your getting close to end and there is no way it can continue Nic finds a way to keep adding with out over doing it and getting repetitive. book 6 tells the story of 2 totally different walks of life coming together inspite of their differences and the troubling peace that some cant accept. sit back and enjoy the ride that is hell divers. I love this series and look forward to the next book. until then we dive so humanity survives.

Seriously one of the best series on audible. I can't wait to hear what's going to happen next. Then I'm sad when the book is over.

face the future without fear <br />

loved book 6. look forward to the next in the series. Hell Divers are AWESOME. this series would make a great franchise

Thoroughly addicted to this series

I get into my books, and this series really sucked me in. The characters are so real, I found myself tearing up at the death of several of them, and the impending death of another. This is a fast paced, interesting series, and totally addictive for any post apocalyptic book fan.