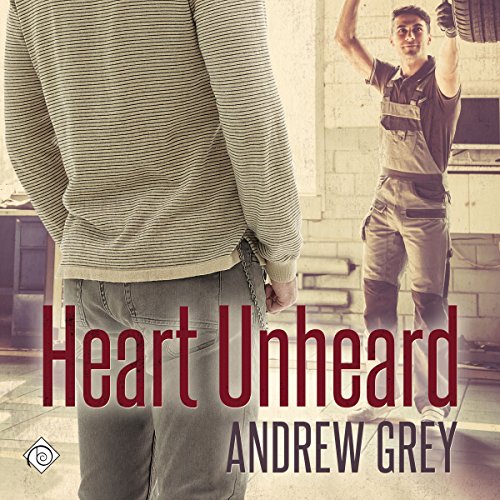 The attraction between Brent Berkheimer and Scott Spearman peels the wallpaper, but Brent is Scott’s boss, and they’re both too professional to go beyond flirting. Their priorities realign after Scott is badly injured in an accident that costs him his hearing, and Brent realizes what is truly important.... He wants Scott.

Scott pushes Brent away at first, fearing a new romance will just add to his problems, but perhaps he will find unexpected strength and solace in Brent’s support as he struggles to communicate with the world in a new way.

Just as they decide the chance of a happy future together is worth the risk, Scott and Brent discover darker challenges in their way - including evidence that the "accident" Scott suffered may not have been so accidental.

a slow burn romance with a definite HEA ending

Andrew Greg has a distinct ability to write stories about men who are going through some of the most challenging times of their lives and manage to either fall in love or admit to themselves and the world around them that they have fallen in love during those times. This tale is of two men who have been attracted to each other for a few years but due to factors that they see as important but others do not, haven't taken a chance to get together to see if they could manage a relationship.

They have a slight age difference (22 - 33) and the older is the manager of an auto shop with the younger being one of the mechanics who was hired previous to the manager being hired and they have let those two factors keep them apart. Then the younger man is hurt in a hit-and-run automobile accident and left injured with the older man asking himself why he didn't take his chance before it all happened. The ensuing struggles of both the recovery of the younger man, Scott, and the relationship between Scott and Brent take some very enthralling pathways along the way to their 'happily ever after'. The other situation that is part of the story is the resolution of the hit-and-run detective work which totally surprised me!

The narrator's performance was superb! His voices for each character were spot on with the emotional feelings that I had associated with that man. He also did a good job with the women's voices and the secondary characters, including reviving the main characters from book 1, Heart Unseen with the same voices he used then. These books were my first experience with Mr. Trembley and I was definitely impressed! I will continue to look for books with his narration!

If you are interested in a story which will hold your interest all the way through (no long word paragraphs here...), I recommend you give Andrew Grey and Greg Trembley a visit with either Heart Unseen or Heart Unheard - they are both worth it! Now I'm going on to listen to Heart Untouched, so expect I will be back with another positive review soon...

I have a huge weakness for survivor stories. There's just something about reading about people who overcomes travesties, and come out stronger on the other end. I'm always in awe, and am amazed of their strengths.

Heart Unheard is that slow-burn romance that Grey is known for. Brent and Scott have been in love with each other for years. But the age difference and the fact that they worked with each other, along with mutual fear kept them from acknowledging those feelings. Then Scott was the victim of a hit and run, causing him to lose his hearing. The accident brings the two men closer, but trying to navigate a new reality isn’t always easy.

I loved how realistic this book was. This was a story I could believe in. No miracle cures or instant fixes. Nor were there any OTT or unnecessary drama. Sure maybe Scott accepted his new reality a bit quickly, but then again who am I to judge how long or how people deal with adversity? I also loved how all Scott’s friends and family truly were friends and family, the support they offered were limitless and just wonderful.

Greg Tremblay once again shows why he's one of my absolute favourite narrators. The way he portrayed these characters were spot on, the feelings of the characters, or the mechanical, toneless reading of the tablet. It was all just perfect. But then I never expected anything else. Anything Tremblay narrates is pure gold in my book.

Heart Unheard was a sweet addition to the Hearts Entwined series, and Greg Tremblay did a fantastic job bringing Andrew Grey's words come alive. It was a low angst and feel good novel and I'm hoping there will be more books in this series in my future.

Andrew Grey is the best!

Sweet story and I learned a lot about what it is like to be deaf, man that has got to be frustrating.

Happy ever after is not always easy.

What made the experience of listening to Heart Unheard the most enjoyable?

Getting to see the characters as more than just words on a page.

What was one of the most memorable moments of Heart Unheard?

When Brent acts without thinking about it, without letting the past define his future.

He gives the characters a voice and allows the listener to experience Brent and Scott's emotions in a way that's not possible just reading the book.

There's this broken beauty to both these men, Brent still hears echos of the past that haunt him and Scott is having trouble handling the constant silence. They really do complete each other. Brent showing Scott that he is so much more than a man that can't hear. While Scott teaches Brent how to open up and let the people that care about him help him.

I loved how Tremblay truly embodied the story with his narration. He speaks too loud at times because it's exactly what a man that could hear not long ago would do. He speaks in monotone when reading the notes people write or type to Scott, and it completely works for the story.

Obviously, I recommend this one, very much so.

not as good as its predecessor

I fell in love with the first book in the series and was hoping to follow up with this one but for me this was a no. The story seemed a bit rushed and it felt like it picked up in the middle. It also was a bit hard to follow because I wasn't sure who was speaking at times.
The narration was on par once you got over the fact that when he was speaking as Scott after he became deaf it was very monotone.
I will stick around to see Dean story and hopefully it's better than this one.
Lastly if you're looking for an erotic hot romance with lots of steamy sex you will not find it here.

This is a book two in Hearts entwined series. It can stand alone but if you read them in order you understand the other recurring characters much more.
Brent has been interested in Scott since he took over the office position in his friend Trent's Garage (This happens in Heart Unseen). Scott is a lot younger than Brent and also his boss so he hasn't acted on his feelings. It has been two years and he just keeps wanting Scott more and more, and Scott's flirtations don't help.
Tragedy strikes leaving Scott deaf and Brent decides he has waited long enough and to take a chance.

There is lots of angst, trials, and tribulations as Scott struggles with his new disability and they both try to make the relationship work. There is a twist when it comes out who hit Scott.

The narration was lovely and well fitting with the story. The pacing is good and you can tell who is speaking. Ar first I thought it was choppy until I realized that was how the narrator was making it known the characters were writing or signing.

If you like office romance, Boss/employee, physically challenged, and May/December you will love this.

Heart Unheard is a light May/December romance between garage manager Brent and Scott, a mechanic at the garage, who ends up in an accident which results in him losing his hearing.

Brent has been interested in Scott for years but hasn't done anything about it due to the whole boss/employee relationship and also being worried about their age difference.

But once the accident happens Brent steps forward, ready to stop being a wussy about the whole thing, after realizing life's too short not to go for what you really want.

Told in a dual third person POV, it was nice to get both Scott and Brent's thoughts on their relationship and to see how frustrating life was for Scott after the accident and how patient and loving Brent was throughout it all. I love Greg Tremblay's character voices and the way he really brings the characters to life, imbuing them with so much emotion. As always, Tremblay is spot-on with timing and pacing. But the real plus for me was how engrossing the story was.

My only teeny-tiny complaint is the way some of the text/note portions were read. They were a bit stilted to me. I prefer texts to be read in a narration as though the character was actually speaking. However, that's a personal preference and I know not everyone feels that way, and it in no way impacted the overall pleasure this was to listen to.

This was a lovely weekend listen spiced up with some heat and a very sweet HEA.

Ever since Brent has taken over the manager post in one of Trevor's garages, he has been irrisitably drawn to young mechanic Scott. The age gap has Brent always kept from taking it any further than looking and lightly flirting, until Scott is involved in a terrible car accident. He survives but loses his hearing. Almost having lost Scott,finally shakes Brent awake and he doesn't leave the young man's side at the hospital and after discharge. While Scott struggles with his handicap, he constantly assures the older man, that the feelings between them are mutual. Then it becomes clear that his accident had not been so accidental as everyone had thought first.

Andrew Grey's fluent writing style instantly made me feel welcome back to the guys in Milwaukee/WC. Again his research into hearing impared and deaf people, their problems and aids, is very detailed and wolven into the storyline, making the relationship development between Brent&Scott feeling authentic. I liked that Trevor and James play an important part, supporting and protecting the pair. I totally fell for determined Scott and wondered, what he saw in Brent,whose constant berating himself as a coward got a bit on my nerves in the beginning. When Brent finally opens up telling his friends what bone crushing burden he has been carrying since his teens,I forgave him all his hesitance and insecurities though.

No matter if it is amazingly headstrong Scott, gentle Brent, Scott's upset family or his bigoted former friends, Mr. Tremblay always finds the perfect voice to bring them „alive“. Into Brent's confession time he put so many emotions, that I had to look for my kleenex-box fast. Honestly, I could listen to his narration all day long and still be stunned about his skills and voice variations!
Dean's irrisponsible behaviour against himself in this installment had left me really worried about him.Now I am antsy and can hardly wait, what Mr. Grey has for him in store next, hopefully soon!