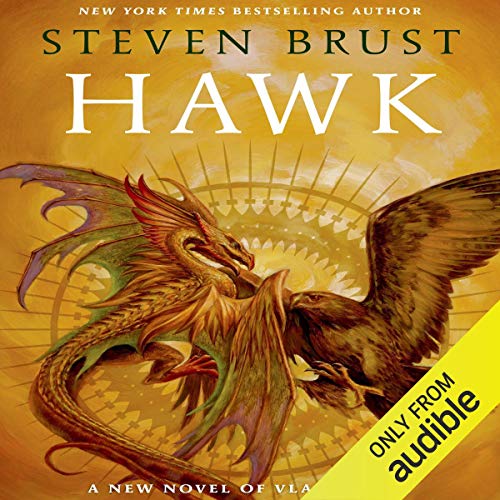 Hawk, the latest in Stephen Brusts' New York Times best-selling Vlad Taltos series. Years ago, Vlad Taltos came from the East, to make his way as a human amid the impossibly tall, fantastically long-lived natives of the Dragaeran Empire. He joined the Jhereg, the Dragaeran House (of which there are 17) that handles the Empire's vices: gambling, rackets, organized crime. He became a professional assassin. He was good at it. But that was then, before Vlad and the Jhereg became mortal enemies. For years, Vlad has run from one end of the Empire to the other, avoiding the Jhereg assassins who pursue him. Now, finally, he's back in the imperial capital where his family and friends are. He means to stay there this time. Whatever happens. And whatever it takes.

“My heart gave a thump. It had been doing that a lot lately. I wished it would stop. I mean stop giving random thumps, not, you know, stop.” ~Vlad Taltos

Note: This review contains spoilers for previous novels in the series.

Hawk is Steven Brust’s fourteenth (and latest) novel about Vlad Taltos, a charming assassin living in Dragaera. Over the past 31 years, fans of this series have been through a lot with Vlad and Loiosh, Vlad’s flying reptilian familiar.

We first met Vlad when he was at the top of his game, running the Jhereg criminal organization of Adrilankha. Then he married Cawti, who also used to be an assassin but later became a social revolutionary. The change in her worldview was too much for the marriage to handle and they separated, but that didn’t stop Vlad from betraying the Jhereg in order to save Cawti from being executed. The Jhereg want revenge and have been hunting Vlad for years while he wandered around the Dragaeran Empire. Meanwhile Cawti gave birth to Vlad’s son, which he didn’t know about until later.

Now, Vlad wants his life back. He wants to return to his city and be able to visit his son (now eight years old) without worrying about the safety of his son, Cawti, or himself. So Vlad hatches a plan to make peace with the Jhereg. He thinks he has discovered a new form of sorcery that he can offer to the Jhereg — something that will make them rich and powerful — in return for their promise to call off his assassination. Will it work? Or will he just expose himself and get killed?

After watching Vlad brood for a long time, it’s great to see him come out in the open, face his fears, take charge of his destiny, and once again become the smart assassin he used to be. It’s great to be back in Adrilankha among Vlad’s friends and associates (including a couple of interesting new characters). For these reasons, Hawk feels more like the earlier novels in which Vlad was witty, clever, and full of life. His voice is once again breezy and ironic, and he’s fun to listen to, even when he’s just walking down the street….

…which is fortunate since Vlad does a lot of just walking down the street in this story. Until the very end, the pace is slow and leisurely, but that’s okay since it’s actually amusing just to listen to Vlad bicker with Loiosh, or wish he had a name that starts with “The,” or lament that his cloak doesn’t billow dramatically when he walks down the street.

I’m glad Vlad’s back. I’m not sure when we’ll see the next VLAD TALTOS novel, but I look forward to it. I listened to the audio versions of this series which were produced by Audible Studios. Hawk is almost 9 hours long, though I increased the playback speed as I usually do. Bernard Setaro Clark is an excellent narrator and this is one of those cases where I enjoyed the book more because of the reader’s performance. I wouldn’t think of reading these any other way.

I really like this story but had a very difficult time getting past the fact that particular characters accents changed and the pronunciation of some words changed after 13 stories.

I read the rest of the series, this was my first audiobook, and I loved it. Loiosh was funny, Vlad was snarky! It was just right. Now I need to go back and listen to them all!

Brust is a great storyteller!

While there were some parts that strayed from the main story with too much detail the overall story and plot is great! The narrator handles the voices very well and the combined talents keeps me in anticipation for the next book.

Brust really knows how to write! In addition to his myriad writer skills, he's just a funny m0therfucker lol!

Bernard Setaro Clark becomes more performative in this book, exaggerating some of Vlad's lines a bit. Still a dreamy voice I think about often. Very exciting book. Was not able to put it down. Shared an impression that connections and experiences are valuable. Talk with your friends more. Rely on people. Trust. lol

Back on track. And super-dope.

Felt like the story was meandering a bit for a while. This brings us right back to where Vlad should be.

every book is amazing

I have loved this series for years!

I have read every one of these books, but loiosh sounds like triumph the insult comic dog from t.v. it took a while to accept. otherwise I love the vlad taltos novels and have read them for years. I discovered them in the early 90s and am very pleased he has kept producing more novels in the series!!! please keep them coming!!!