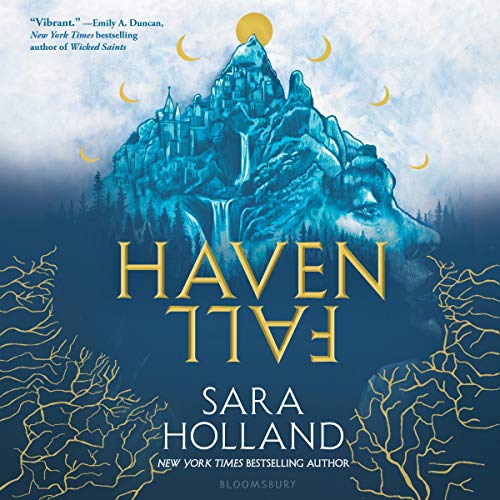 Hidden deep in the mountains of Colorado lies the Inn at Havenfall, a sanctuary that connects ancient worlds - each with their own magic. For generations, the inn has protected all who seek refuge within its walls, and any who disrupt the peace can never return.

For Maddie Morrow, summers at the inn are more than a chance to experience this magic firsthand. Havenfall is an escape from reality, where her mother sits on death row accused of murdering Maddie’s brother. It’s where Maddie fell in love with handsome Fiorden soldier Brekken. And it’s where one day she hopes to inherit the role of Innkeeper from her beloved uncle.

But this summer, the impossible happens - a dead body is found, shattering everything the inn stands for. With Brekken missing, her uncle gravely injured and a dangerous creature on the loose, Maddie suddenly finds herself responsible for the safety of everyone in Havenfall. She’ll do anything to uncover the truth, even if it means working together with an alluring new staffer Taya, who seems to know more than she’s letting on. As dark secrets are revealed about the inn itself, one thing becomes clear to Maddie - no one can be trusted, and no one is safe....

Sara Holland takes the lush fantasy that captured listeners in Everless and Evermore and weaves it into the real world to create a wholly captivating new series where power and peril lurk behind every door.

"An enchanting and thrilling contemporary fantasy." (Brigid Kemmerer, New York Times best-selling author of A Curse So Dark and Lonely)

"Twisting plot threads intersecting with tantalizing glimpses of fully realized other realms, Havenfall creates a vibrant world where magic is closer and more dangerous than we know. Maddie is a delightfully messy and real teenager and I adored following her as she tried to untangle the mysteries around her." (Emily A. Duncan, New York Times best-selling author of Wicked Saints and Ruthless Gods)

Slow to start, praying for a sequel!!

Ok, not gonna lie, I downloaded this book initially just because it’s based out of the Colorado Rockies, where I am from. And I almost didn’t finished this book. The first little bit of it was slow. Horribly slow. It didn’t have just the typical chapter or two of back story, but, it also had bits of a back story scattered through the first few chapters before the story really got going. Once it did tho, wow. Very good story. Not too terribly predictable. Very good story line and I really hope the author makes a sequel.