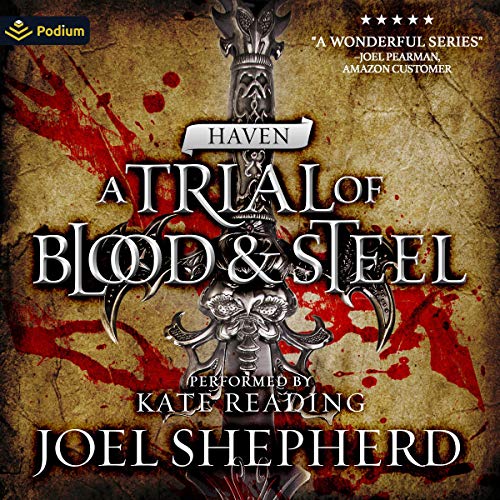 The heart-stopping conclusion to the Trial of Blood & Steel quartet.

The Army of Regent Arrosh advances on the forces loyal to Saalshen, homeland of the serrin people, as the serrins' friends are in full retreat. Their only hope is to reach the city of Jahnd - the serrin word for haven - across the Ipshal River.

The Army of Lenayin marches with the Regent, but Sasha, sister of newly crowned King Koenyg, can no longer stomach the awful cause for which her people fight. As tensions build between Sasha and her brothers, her sister Sofy - wedded to the Regent - travels to the city of Tracato to attempt to negotiate a peaceful transition of its rich heritage to her husband's rule. But there are forces beneath the Regent's banner that wish to see all serrin and serrin-influenced civilization destroyed for good.

While the serrin people fight for survival, families must be betrayed, enemies reconciled, nations persuaded, and great armies fought, as Sasha's tale reaches its dramatic conclusion.

Perfect ending to a great series!

Joel Shepherd knocks it out of the park with an finale to be proud of! And truly, Kate Reading as narrator brings the whole cast of characters to life! Couldn't have chosen a better voice for Sasha and her companions throughout the series! I'm just sad I won't get to see Lenayin grow... Great stuff indeed!

so much has come to a conclusion and there are losses felt, the end of an era and a great tell of how it all came together! excellent story

A fair ending for a good series. Tears were shed. At first I did not care for the voice actress, but grew to like it as the series continued.

A great conclusion to a long and epically entrancing fantasy tale.. . thank you!

I knew that the series needed to end and I was ready to see how it did. But, that did not stop me from craving more once I did arrive at the end of this epic tale. I loved the well defined characters, the cities and landscapes that were painted clearly in my mind's eye and a story so well developed that I felt like a character moving through each chapter. I truly appreciated the lack of predictability, the obvious effort to put forth an awesome story and the perfect narration of my favorite narrator, Kate Reading. Thank you, Joel Shepard.

Battles, blood, politics, glory, love, passion, loss and one of the best narrators in audiobooks. It took me awhile to get used to the names and places so glad it’s a great enough tale to listen to the whole series again!

This series was very entertaining although the last book was a little drawn out. Kate Reading was superb as always.

Definitely worth sticking with

a nutshell, every book in the series has gotten better. I have mixed luck with many self published authors but was drawn to this one by the excellent narration of Kate Reading. The first book, Sasha - a trial of blood and steel, I had a lot of trouble getting into it. Starts of with characters, whose relationships with one another are confusing, discussing the political and military background of peoples you’re not yet familiar with. I found it dry and confusing with a strong lack of action.

Fortunately I keep reading until I understood enough to make the plot aisle full. From the end of the first book until the conclusion of the last I was hooked. Reading has narrated some of the best fantasy books out. Thrre. This isn’t