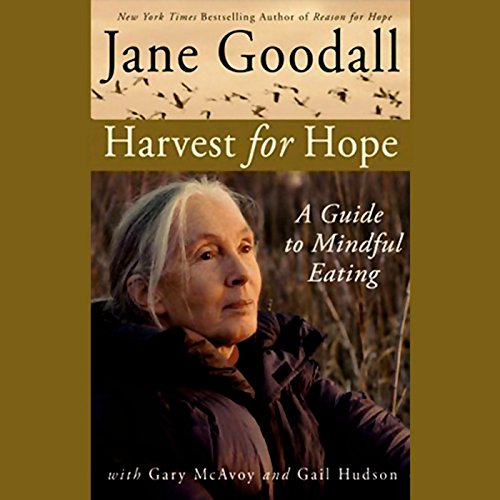 Renowned scientist and best-selling author Jane Goodall delivers an eye-opening and empowering book that explores the social and personal significance of what we eat. In Harvest for Hope, Jane Goodall presents an empowering and far-reaching vision for social and environmental transformation through the way we produce and consume the foods we eat. In clear, well-organized chapters that include "The Organic Boom" and "Thinking Globally, Eating Locally", readers will discover the dangers behind many of today's foods, along with the extraordinary individual and worldwide benefits of eating locally grown, organic produce. For anyone who has ever wanted to know how they can take a stand for a more sustainable world, Harvest for Hope reveals the healthy choices that will support the greater good.
©2005 Jane Goodall and Gary McAvoy. All Rights Reserved. (P)2005 Time Warner AudioBooks. A division of Time Warner Book Group.
Habitat vert et durable Maison et habitat Jardinage et horticulture Régimes, nutrition et alimentation saine Réussite personnelle Nature et écologie Sciences de la Terre Science
Afficher plus Afficher moins

Not the best examination of our flawed food system

Goodall may be a biologist by training, but her approach to this topic, as others have mentioned, is emotional, sentimental, and fear-mongering, rather than scientific. She states so many things in this book as facts without citing where she got the information from, and in fact some of these items are scientifically incorrect. They seem, rather, culled from vegetarian/animal rights activist propaganda without any further critical examination on Goodall's part. At least from what she states in the book, it sounds like she picks up much of her information from reading X book or Y article and then just accepts it as fact, despite the fact that there are different views on many of these issues.

Unfortunately the poor narration does even more to harm how this book comes across. The lilting, superior way it comes across (unlike Goodall's much less grating voice at the beginning and end of the book), makes me want to cringe every other sentence, especially with the phony laughs and the times when the voice conveys a smug, self-satisfied smile about one thing or another.

That being said, I think there are important truths in this book that many of us can agree on, and it has given me some additional motivation to get back to trying to eat more local and organic. I just wish the presentation of this book were better and the science behind it were better, because I think it will completely turn off a lot of people who are new to such material. Likewise it's also destined to put sometimes incorrect ideas in some heads who will use this book as a reference of *facts* and not realize that there is much of it that is actually just opinion that isn't backed up with solid facts. Unfortunately these people will continue to spread myths that, when debunked, will do more disservice to the overall cause because it then makes the idea of organics and local food seem to be based on fallacies.

So, if this area is something new to you, I would highly recommend a different book, one that is more balanced but often reaches similar conclusions, but in a much better researched way - a book I read 10+ years ago which got me to start thinking seriously about where I got my food - Michael Pollan's Excellent "The Omnivore's Dilemma."

Must read for all who eat.

As consumers we need to be aware of how corporations affect our food supply. If we are to be advocates for our own health this is information we need to know and we need to teach it to our children. If knowledge empowers and if “every food purchase is a vote” this book should be required reading for all of us.

I absolutely love this book.

I found this book very informative and because of it I was able to go to a website where I found a local sustainable Farm and I became a CSA share crop holder and I will now receive locally grown organic sustainable fruits and vegetables every week. I also plan on volunteering at this local Farm that way I can be involved, learn and really know where my food comes from.

What an impairment read!! Jane Goodall is a ray of light! She sought out the truth, shares it in this book and ensures that the reader is left feeling hopeful with a section at the end of each chapter on "what you can do". Thank you Jane! I am so inspired :)

Very informative and easy to read

What did you love best about Harvest for Hope?

An easy read that kept my attention. Very informative with lots of detail. My 10 year old also lived the book

What was one of the most memorable moments of Harvest for Hope?

I thoroughly enjoyed many scenes I'm not sure I have a favorite.

I've learned a lot and I am making a conscious effort to pay attention to the details about where my family's food comes from. We've purchased a water filter and buy more organic or wild crafted food items

This book uncovers nothing that anyone even remotely interested in the wholesomeness and safety of their food doesn't already know, and is written and narrated in a style that seems directed to the intellect of a third grader. I was thinking that as a biologist, Ms. Goodall would able to provide some balance between the health food store fear mongering and the glib assurances of the agribusiness PR flacks, but she chooses to talk down to her audience, and I believe even quotes some wacko publication like "Well-Being Journal" (I'd actually have to listen to the hour or so that I managed to tolerate to accurately cite what publication of dubious credibility it was) as a source. The narrator does the text justice. Perhaps this is why she hasn't been heard from since "The Birds".

the book is wandering and largely emotionally driven rather than scientifically, fact based it's only brought down further by the ridiculous narration. it would seem the narrator finds each and every word of each and every sentence to be a profound revelation which all of humanity should bow down and thank her for(not to mention the uncanny similarity her voice shares with the captain of star trek's voyager series.) I couldn't agree more with another reviewer's opinion posted here that it all sounds as though the listener is assumed to be a 3rd grader.
PASS.

The best Audiobook Ever

This book changed my life. I did know some but not everything she preached. This was an amazing book!

A great listen. Explains in plain english all the bad things out there. Very well done.

The truth we need to hear

Very rich in information with helpful tips and good advice how each person can contribute to a better world and life quality.